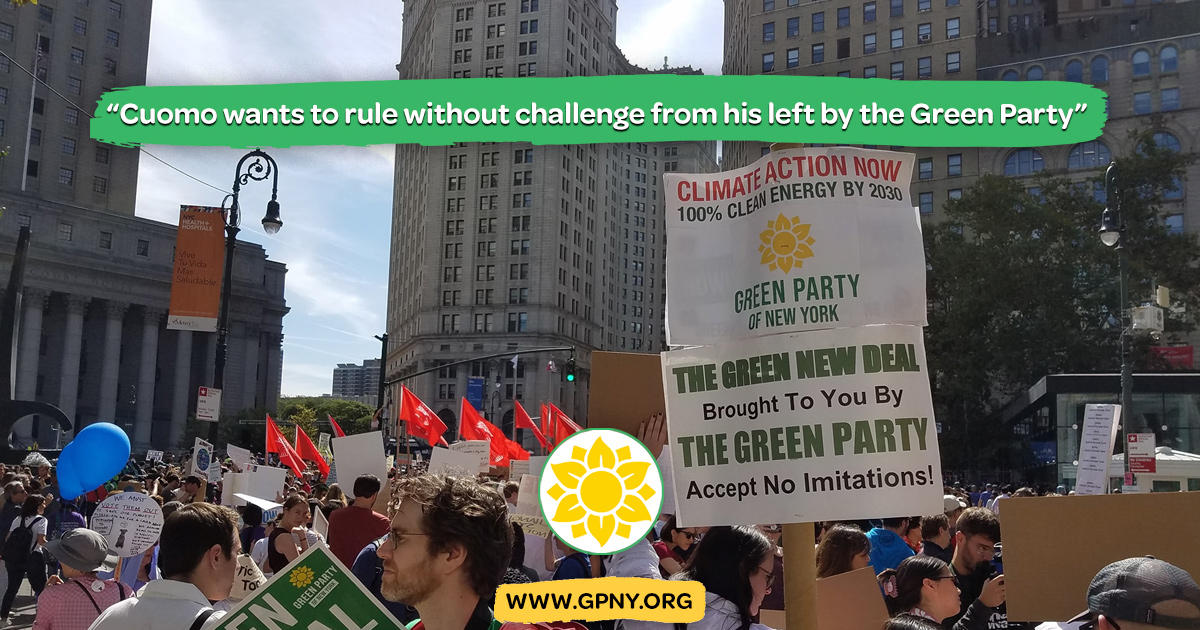 "Cuomo wants to rule without challenge from his left by the Green Party. He wants to sneak higher ballot access requirements designed to kill third parties in New York while the public is preoccupied with the coronavirus crisis," said Howie Hawkins, who received 4.8% of the vote as the Green candidate for governor in 2014.

The NY Daily News reported Friday that the Cuomo administration plans to put higher ballot access thresholds into the state budget. Cuomo had pushed the higher thresholds into law in December through a Public Campaign Finance Commission. A State Supreme Court justice overturned the law on March 12, 2020 ruling that the legislature cannot delegate law-making to an appointed commission.

The commission had raised the vote threshold to secure a party ballot line from 50,000 to the higher of 130,000 or 2% every two years in gubernatorial and presidential years, instead of 50,000 every four years in gubernatorial elections. It also tripled the petition signatures required to put an independent candidate for statewide office to 45,000 to be collected within a six-week window.

The only Green Party candidates to meet this voting threshold have been Ralph Nader with 244,030 votes for president in 2000 and Howie Hawkins with 184,419 votes for governor in 2014. Hawkins, who is leading in the 2020 Green presidential primaries, could be the candidate trying to pass the 2% threshold if Cuomo's proposal becomes law. 2% of the presidential vote in 2016 was over 155,000 votes.

Much of the commentary on Cuomo's push for higher ballot access requirements has emphasized Cuomo's irritation with the Working Families Party. But Green Party leaders believe Cuomo is taking direct aim at their party.

"Cuomo may dislike the Working Families Party for pestering him for more progressive policies and for backing progressives against his centrist allies in Democratic primaries for legislative seats. But they always back him for governor. It is the Green Party that has always run a candidate against him in the general election," said party co-chair Gloria Mattera.

Unlike most states, New York does not permit minor parties to qualify for a ballot line by petition, by reaching a vote threshold for any statewide office, and/or by having a set number of people enrolled in the party. Cuomo's proposed thresholds would make New York's ballot access law among the most restrictive of any state in the nation.

"The US has the most restrictive ballot access requirements of any electoral democracy in the world and now Cuomo wants to make them even more restrictive. The ballot should be available to all serious candidates. It is anti-democratic for the Democrats and Republicans to keep their competition off the ballot, especially when combined independent and third-party enrollment is 27% of the active New York electorate. That is 54% of total Democratic Party enrollments and 5% more than Republican Party enrollments," said Hawkins.

Party co-chair Peter LaVenia noted that "while it normally takes 3,500 signatures for an independent or new party candidate to qualify on the New York ballot for the US House, it takes a small fraction of that to qualify for the national legislatures of other countries. In New Zealand, it takes two signatures; in the UK, 10; in Australia, 50; in Canada, 50 to 100; in Germany, 200. In a number of US states, it takes tens of thousands of signatures," LaVenia said.

"Governor Cuomo and the New York State Legislature should prioritize budget negotiations on items that insure the health and safety of New Yorkers during and after this crisis, not fattening the campaign accounts of incumbents and eliminating progressive competition in elections," added LaVenia.