Green Party of California Statement on the War in Ukraine 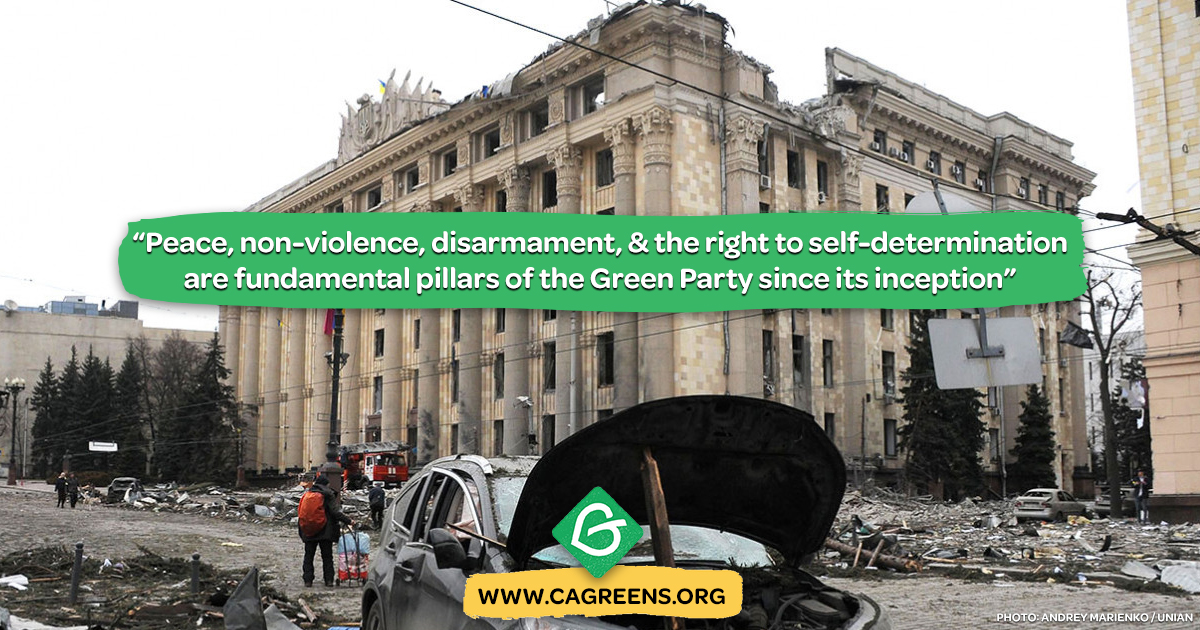 SAN FRANCISCO – The Green Party of California condemns in the strongest possible terms the recent attack on Ukraine by the Russian military that has so far caused hundreds of civilian casualties, including children, and forced thousands of Ukrainians to take refuge in Poland and other neighboring countries [1].

Likewise, we also condemn the relentless provocations and warmongering tactics that the U.S. has been using against Russia in an effort to expand influence in the region as a co-leader of NATO. By sending hundreds of millions of dollars in military aid to the Ukrainian government each year – $600 million alone last year and more than $2.7 billion since 2014 [2] – and by authorizing NATO countries to transfer U.S. made weapons to Ukraine [3], the Biden Administration has been actively contributing to tensions between Russia and Ukraine.

Peace, non-violence, disarmament, and the right to self-determination are fundamental pillars of the Green Party since its inception [4]. Therefore, we believe our global priority must be the de-escalation of threats by stopping NATO's expansion through Eastern Europe to the borders of Russia, and the immediate escalation of talks with Russia as a part of diplomatic efforts to prevent an armed conflict and promote worldwide stability [5].

The U.S. spends more on its military than the next nine highest spenders combined, including Russia, China, and India, yet Congress proposes further increases to the already overinflated $778 billion military budget, which stands at almost 50% of the U.S. discretionary spending [6].

A staggering cost to support the U.S. war budget is paid by the residents of California, reflected in the record numbers of unhoused people in our communities and the hundreds of thousands of others struggling with unsafe, overcrowded, and unaffordable housing.

While thousands of Californians are unsheltered and unhoused, California sends $450 billion dollars a year to the federal government in taxes [7] while ranking 40th out of 50 states in terms of net federal funding received [8], a significant proportion of which still goes to fund California's share of the military-industrial complex [9].

Our government’s propensity for wars – including the proxy wars in Yemen, Libya, Iran, and now Ukraine – is fueling the huge international arms market. In 2019, the defense industry invested over $160 million dollars in lobbying and political contributions bribing our representatives nationally, split nearly equally between the two corporate parties [10]. In response, they received a massive return on their investment when the Department of Defense awarded $66.2 billion dollars to defense contractors in California alone, the largest share among all states and the District of Columbia [11]. Weapons manufacturers and defense contractors Lockheed Martin, Raytheon, Northrop Grumman, Boeing, General Dynamics – all of which have offices in California – and their investors have raked in huge profits from wars and will again, from a war in Ukraine [12][13].

“They are making a killing on deals that are literally killing people and destroying the planet!”, said Laura Wells, Spokesperson for the California Green Party and Green candidate for State Controller. “Meanwhile at home in California, our elected officials – a supermajority of which are Democrats – refuse to back bills for more affordable housing, guaranteed healthcare for all, and tuition-free higher education.” The California Democratic Party's recent failure to approve CalCare, the state single-payer healthcare bill, is just one more example of the sacrifices imposed on Californians [14].

The U.S. military is the world’s largest institutional oil consumer and the single largest producer of greenhouse gasses [15]. Its operations and expansion in support of endless wars force an unsustainable and devastating global sacrifice on future generations and communities worldwide.

The Green Party is the only national party committed to cutting the military and war budget by at least 50% and using the resulting “peace dividends” to fund much-needed programs tackling the massive gaps in social services, housing, education, and effective climate action [16]. The Green Party of California demands that our government prioritize the needs of its people and the future of our planet over the greed and profits of its billionaires. Today, it is essential that we reignite the anti-war movement and transition to an eco-socialist peace economy by ending the cycle of imperialist wars.
Join us in our work towards global peace for a world we need and deserve. CAGreens.org