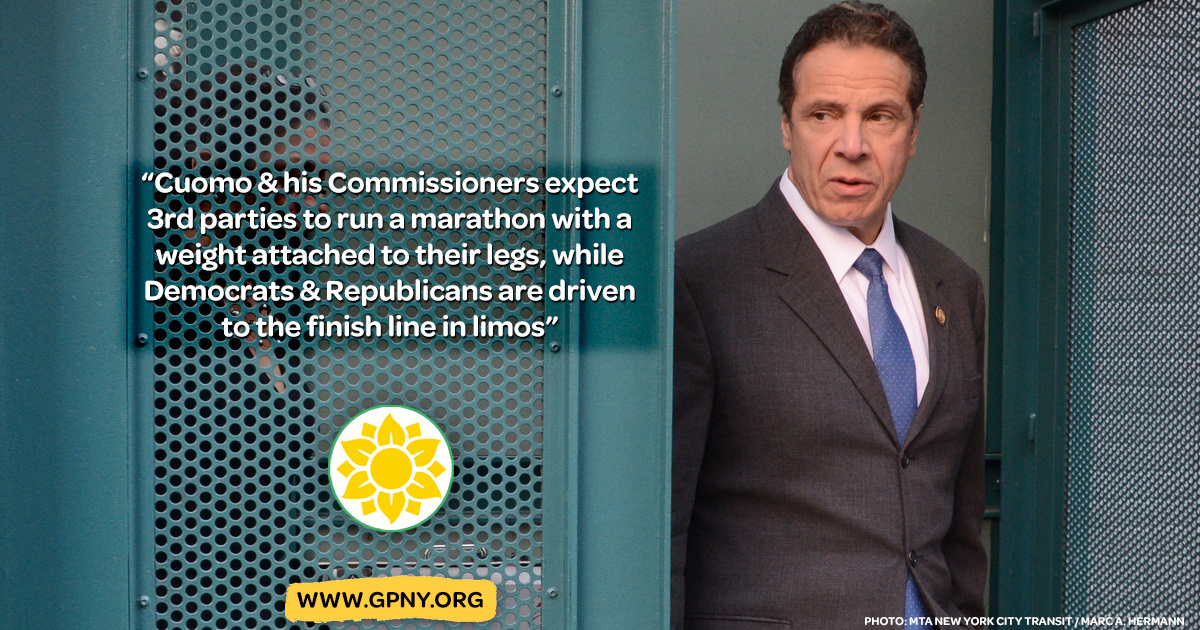 ALBANY, NY – 11/26/19 - Green Party of New York leaders said Gov. Cuomo's comments at a press conference today, in which he stated third parties needed to prove their viability before receiving public funding, are not just wrongheaded, but dangerously undemocratic. Officers said that the exact opposite should be true: public campaign financing should aid third parties and candidates in becoming viable. By placing nearly insurmountable barriers to entry to the ballot and public campaign financing Cuomo and the Commissioners expect third parties to run a marathon with a weight attached to their legs, while Democrats and Republicans are driven to the finish line in limos.

"Public campaign financing was designed to aid candidates in becoming viable and competitive in exchange for refusing to take private donations. Third party candidates, like those from the Green Party, are excluded from debates, out fundraised by corporate candidates, ignored by the media, hidden far down ballots, and constantly fear having their lines stolen by opportunity-to-ballot. Real public campaign finance systems, like 'Clean Money, Clean Elections' in Arizona and Maine, allow grassroots candidates a chance to compete. By setting the bar so high for entry, the Commission willfully ignores the systemic barriers to third party success – because in reality their bosses don't want competition," said co-chair Peter LaVenia.

"Andrew Cuomo has never had to endure the long hours and fraught weeks of signature gathering needed to get on the ballot as an independent. Cuomo is a spoiled rich kid that's always gotten what he wanted. And just like a spoiled rich kid, he has no clue what it means to really face any obstacles in life or politics. It would be sad if the consequences for democracy in New York weren't so dire," concluded co-chair Gloria Mattera.