Green Party files to run for Governor and Lt. Governor 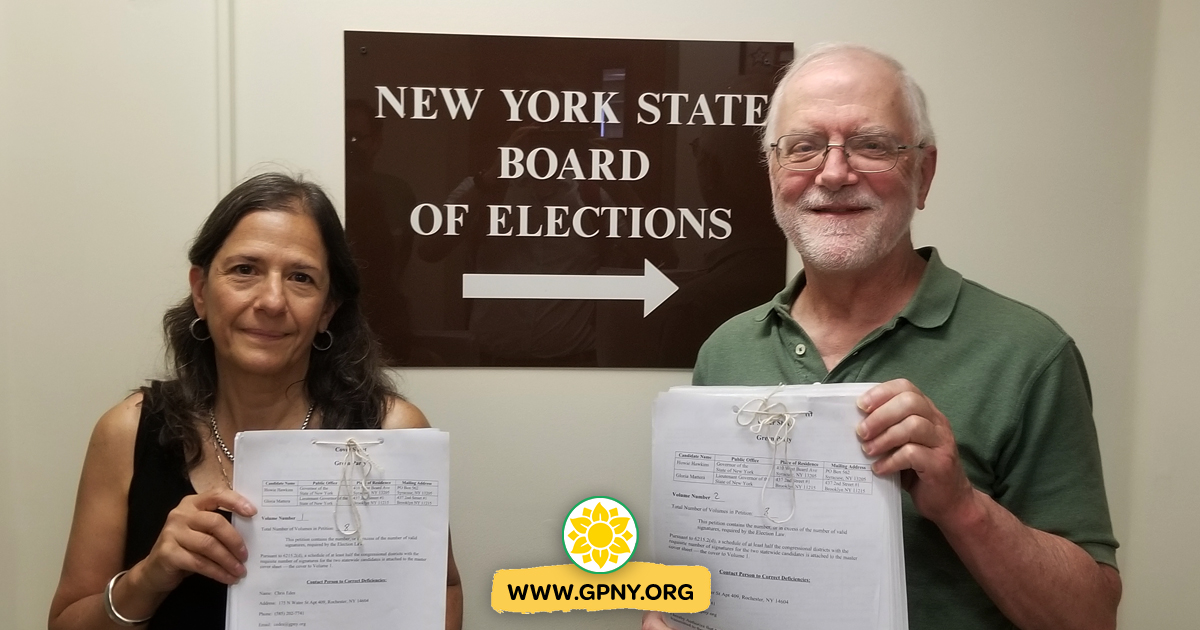 ALBANY, NY – The Green Party of New York filed nominating petitions for their candidates for Governor and Lt. Governor on Tuesday, saying that the Democrats’ failure to address critical issues in the 2022 state legislative session highlighted the need for an independent progressive alternative party in New York.

“The Democrats have had complete control over the state Capitol for the last four years but they have failed to take needed action on a host of critical issues, including a Green New Deal to address climate change and economic injustice, an end to political corruption, and taxing the rich. And they continue to waiver on the modest criminal justice reforms they enacted last year. The giant corporations and the super-rich own the two major political parties in New York. Those of us in the 99% need our own party,” said Howie Hawkins, the Greens’ nominee for Governor.

Gloria Mattera, the Greens’ nominee for Lt. Governor, is a public health care worker in New York City and long a fierce advocate for a state-level Medicare-for-All program. “We need to join the rest of the world’s industrial countries in guaranteeing everyone access to quality health care, rather than wasting enormous amounts of funds to profit the insurance and drug companies. Even with a majority of Democrats in both houses nominally sponsoring the New York Health Act, they won’t pass it. The Democrats always tell the voters that the Republicans are the problem. Yet when the Democrats are in power they still fail to enact common sense reforms,” said Mattera, who was also the Green candidate for Lt. Governor in 2010.

Hawkins garnered enough votes in the 2018 gubernatorial race to give the Greens the right to automatically field statewide candidates on the Green Party ballot line through 2022. But former Governor Andrew Cuomo pushed through a change in ballot access laws attached to the state budget package in April 2020 when the legislature only met virtually during the COVID lockdown. These changes to ballot access eliminated all parties from the ballot in New York except the major parties and their fusion appendages that ran Joe Biden or Donald Trump on their ballot lines in 2020. Access to the ballot in New York is now the most difficult in the nation — and, in fact, the world for independent candidates.

Hawkins said that a central campaign theme for the Green Party this year will be “inclusive democracy.” He said the Greens will campaign for a fair ballot access law as well as ranked choice voting. “Ranked choice voting will end the vote-splitting spoiler problem inherent in the existing single-member-district, winner-take-all election system,” Hawkins said.

For the state legislature, Hawkins said the Greens want ranked choice voting in multi-member districts in order to create a multi-party system where all parties are represented in proportion to their voting support. “Proportional representation will also render partisan and racial gerrymandering impossible,” Hawkins said.