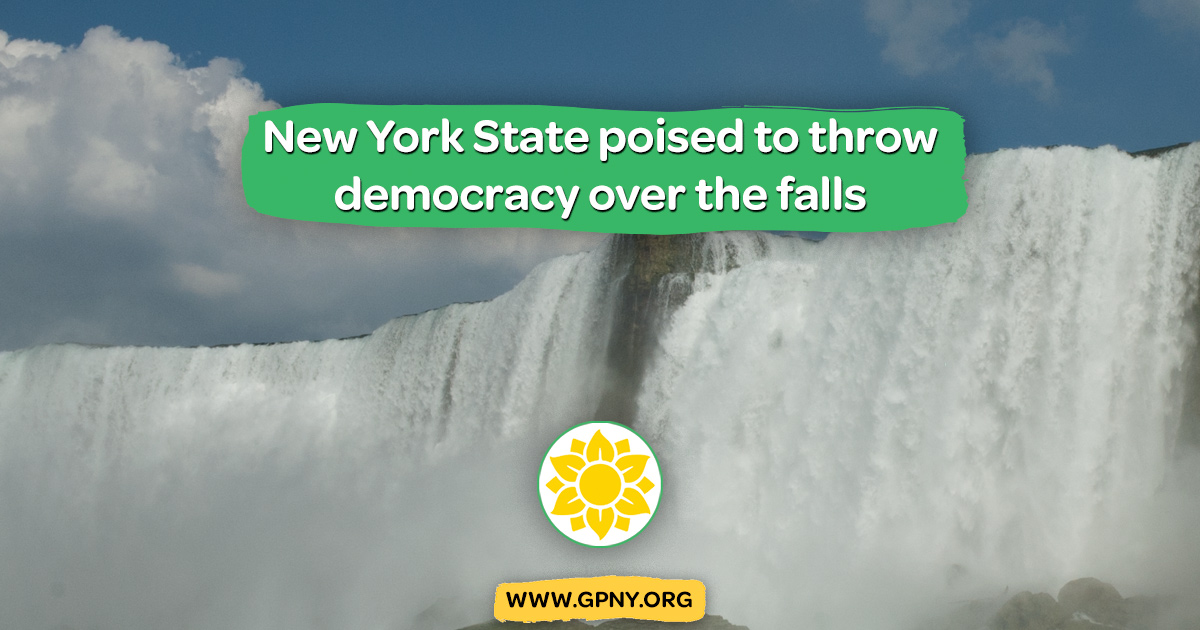 ALBANY, NY 11/25/2019 — Green Party of New York officials said today the Public Campaign Finance Commission's decision to raise ballot access thresholds to 2% of the vote or 130,000 votes (whichever is greater) for presidential and gubernatorial elections was an anti-democratic decision that would limit voter choice in New York.

Gloria Mattera, party co-chair stated "The Commission was supposedly charged with cleaning up the role of big money in New York elections. Instead, they made a few cosmetic changes while focusing on killing third parties. The legislature needs to stand up for democracy, and come back to finish the job they should have done last spring."

The Green Party vowed to fight the decision to kill third parties.

"The decision by the Commission to raise the ballot access threshold to 2% of the vote or 130,000 votes (whichever is greater) for governor and president immediately makes New York one of the most restrictive ballot-access states in the nation. Small parties like the Greens will face an almost impossible treadmill every two years to secure hundreds of thousands of votes, then do it all over again in short order. This will impact voter choice on the ballot at every level, especially on local and state ballots. The Democrats and Republicans have colluded once again to limit competition and deny New Yorkers real choice," said party co-chair Gloria Mattera.

The Greens noted that states across the country have been lowering the threshold to create third parties, often due to court challenges. Richard Winger, that nation's leading ballot access efforts, has stated that New York's effort to raise the threshold above 2% would likely not withstand a court challenge.

"Every rationale the Commission has given for raising ballot access thresholds has rung hollow. Campaign finance experts have repeatedly said third parties would not overburden the matching funds system, and New York City offers a model in New York State that has functioned for three decades with smaller parties. Other states have fairer ballot access laws, public campaign financing, and third parties. New York is oddly choosing to make ballot access more restrictive when other states have moved in the opposite direction. This stinks of Cuomo's vendetta against the WFP, but the consequences will be hurting other third parties like the Greens and Libertarians. It's a cruel joke and the only winners are the Democratic and Republican party leadership," concluded state co-chair Peter LaVenia.

The Green Party advocates for a full public campaign finance system such as Arizona and Maine.

The Greens also wants the state to adopt a ranked choice voting system for all elections such as the one recently approved by voters in New York City.

The Greens noted that one way to curb the pay-to-play culture at the State Capitol would be to indict Governor Cuomo for corruption. Cuomo's economic czar was convicted for bid rigging in the Buffalo Billion scandal that Cuomo initiated. Cuomo's campaign manager and top staff aide was convicted for bribery and corruption. Cuomo apparently improperly interfered with a JCOPE investigation into Cuomo's campaign manager's apparent misuse of state resources to re-elect Cuomo. Cuomo shut down the Moreland Commission once it began asking why the real estate industry makes massive campaign donations to Cuomo.

Your right to vote Green is under attack!
Green Party of New York