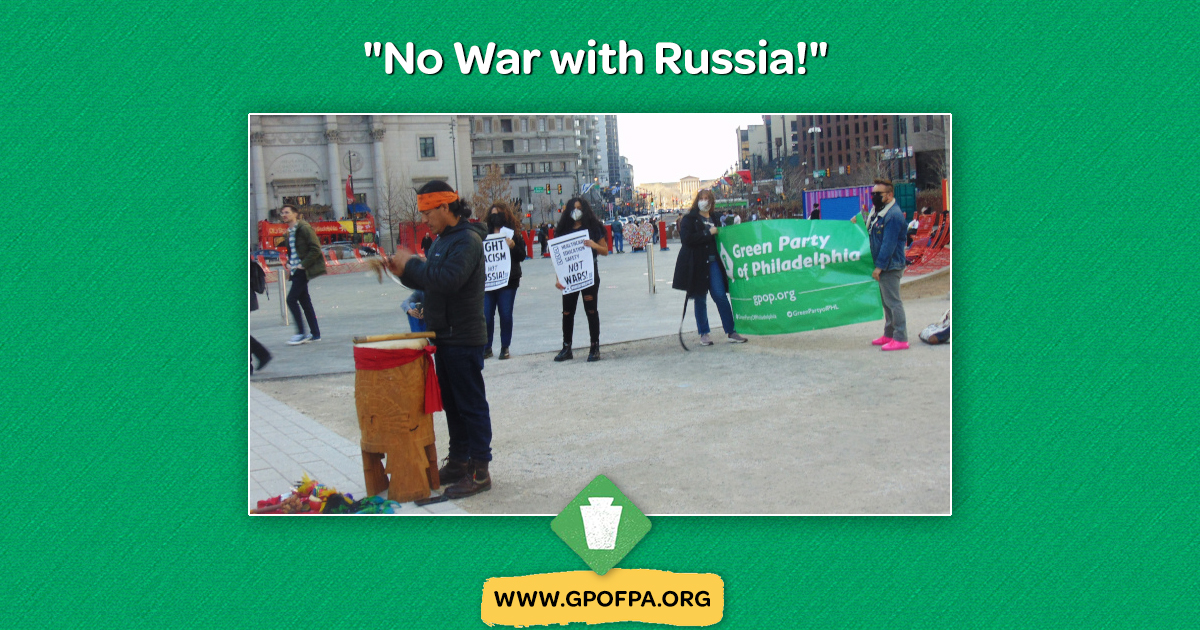 PHILADELPHIA – On February 12, the pre-Valentine's Day crowd at Philadelphia's Love Park was joined by 75 demonstrators who gathered for a rally to stop the U.S. escalation of tension with Russia. The protest called for an end to U.S. military and economic moves against Russia. Signs said, "Fight Racism, Not Russians!" and "Union Contracts, Not Military Contracts!"

"The drumbeat for war should be shown for what it is -- a distraction," declared Hillary Kane (Cedar Park), a member of the Green Party of Philadelphia City Committee (GPOP). "It is a convenient distraction from all of the ills plaguing Biden domestically -- from the COVID pandemic to the housing crisis to the climate crisis. We need to focus our energies on those issues, not some trumped up conflict with Russia. This is 2022, not 1962."

"I haven't been to any public gatherings, protests or demonstrations since the pandemic began," confessed GPOP member Beverly Rolfsmeyer (Roxborough), "but sometimes you know when you need to be somewhere -- when a cause is so important that you put your concerns aside. Why are we still doing anti-war demonstrations? I thought we were over that! As a registered Green Party voter, I can't, in all consciousness, be part of a system where both Parties in power put militarism over improving our infrastructure, eliminating poverty, and putting all of our resources into reversing climate change."

"The U.S. is in a crisis of its own," said GPOP member Georgie Georgeson (South Philadelphia). "I can think of far better uses for our tax dollars than to line the pockets of war profiteers and gamble with the lives of our youth and the lives of innocent Russians and Ukrainians. Biden should exercise diplomacy and focus instead on fulfilling his campaign promises and making tangible improvements in the lives of his constituents." Georgeson is a past member of the GPOP City Committee.

"The Green Party is the Peace Party," said Chris Robinson (Germantown) to the gathered crowd. "There is no way that the Green Party will support a war with Russia! We have demanded that the Pentagon budget be cut in half. Those wasted funds should be used instead for housing, universal healthcare, and transforming our fossil-fuel economy into a renewable-fuel economy. Right now, the Pentagon is spending $1.2 trillion ordered by Barack Obama for a complete rearmament of the Pentagon's nuclear weapons. Those funds should be used, instead, to end world hunger and to end man-made climate change." Robinson was a member of the GPOP City Committee and is now leader of the Green Party of Pennsylvania Communication Team (GPPA).

"The Green Party needs you to run for office to turn around our country," urged Robinson. "We want to run environmental candidates, peace candidates, community-control-of-police candidates, and universal healthcare candidates. Please let us know if you are ready to do your part."

"In 2018 the Congressional Budget Office floated a figure of $1.2-trillion for a complete rearmament of our nuclear delivery system. All of this . . . is a continuation of an initiative begun under President Obama." by James Hanink, New Oxford Review, Nuclear Rearmament, September 15, 2020.
https://www.newoxfordreview.org/nuclear-rearmament/.