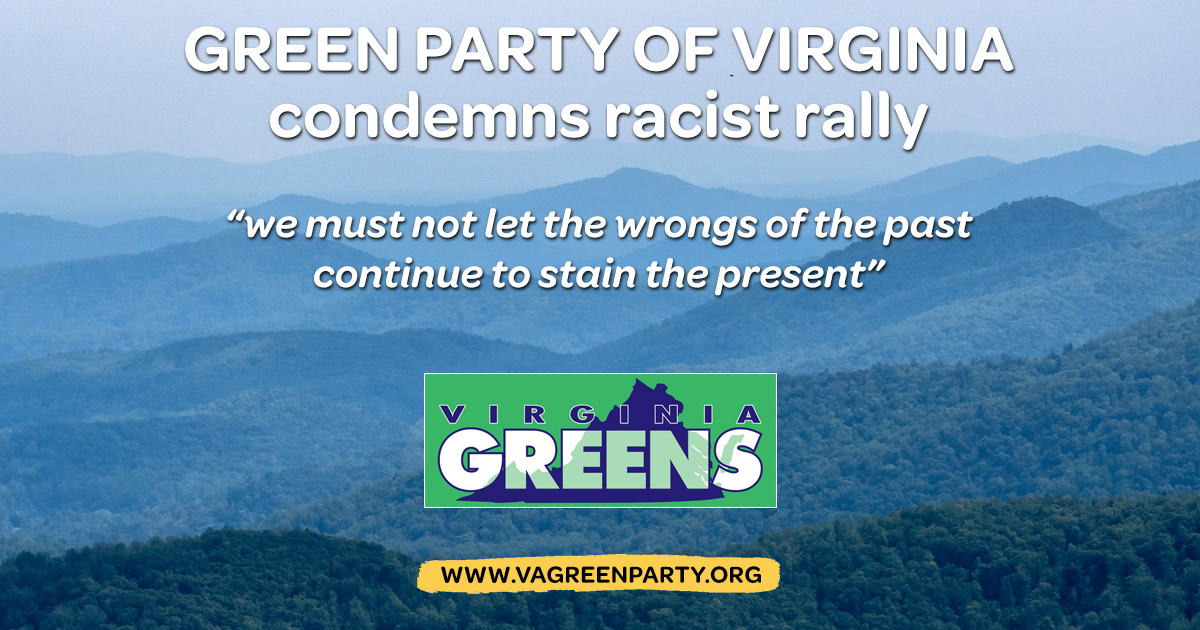 The Green Party of Virginia joins Charlottesville Mayor Mike Signer in condemning the racist torch lit rally recently held by white supremacists in Charlottesville, VA. The rally, which included infamous white-nationalist Richard Spencer, was held to protest the decision to remove the statue of Confederate General Robert E. Lee from a park.

Our nation is standing at a crossroads, with politicians of the two major parties committed to division and ultra-partisanship. The GPVA calls on all Americans to work for community cohesion, to seek mutual understanding, and to demand mutual respect.

Echoing the sentiments of Mayor Signer, the GPVA agrees that the event was either designed to instill fear in the minority populations in a manner that hearkens back to the KKK, or was profoundly ignorant. Residents of the city democratically decided, through their city council, to remove the statue. All Americans must respect the will of the people.

Co-chair of the Green Party of Virginia B. Sidney Smith said, "We cannot and should not erase any aspect of our history, but we must not let the wrongs of the past continue to stain the present. Instead, all of us should rally around our common future. The Green Party recognizes an intimate connection between our rights as individuals and our responsibilities to our neighbors. Moreover, the historic crime of chattel slavery has yet to be fully redressed or its victims properly compensated. The racist response that this 'march' exemplifies to the efforts of the citizens of Charlottesville to restore historical justice is indefensible."