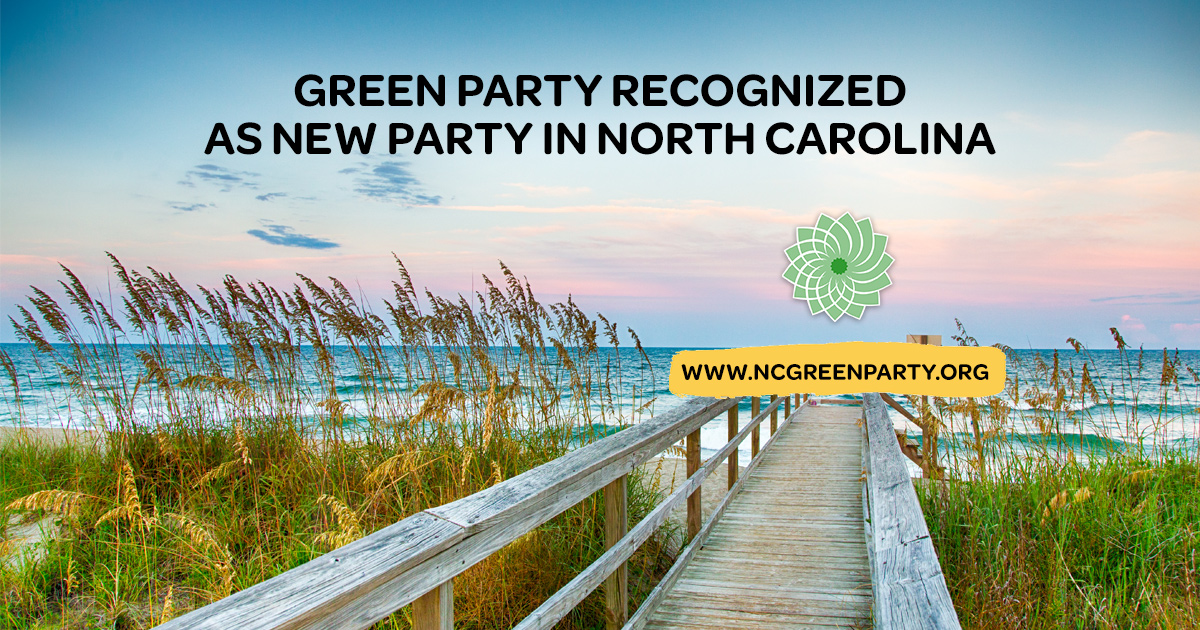 RALEIGH — The North Carolina Green Party is pleased to announce that residents can now register to vote Green in North Carolina! In one of the first meetings of the newly seated State Board of Elections, board members approved the Green Party’s application for recognition as a new political party. The application was submitted at the end of December 2017 in anticipation of the changes taking effect on January 1 of this year that amended requirements for new parties seeking ballot access. Recognition had been on hold since January, pending the seating of the board by Governor Roy Cooper.

Senate Bill 656, passed in October 2017, lowered the petition signature requirement from 2 percent of the number of votes for governor in the last gubernatorial election to 0.25 percent, bringing North Carolina more in line with rules in other U.S. states. These changes, which became law on January 1, also provide that a party whose presidential candidate was on the ballot in at least 70 percent of the states in the previous election will qualify as a new party in North Carolina automatically. The 2016 Green Party presidential slate of Dr. Jill Stein and Ajamu Baraka was on the ballot in 37 states and Washington, D.C., as a Green. (An additional 8 States featured Stein/Baraka on the ballot as an independent.) This qualifies the North Carolina Green Party immediately without the need to complete its petitioning drive, for which it had already gathered over half the required number of signatures.

The Green Party will be bringing a significant new voice to state politics -- an independent voice free of corporate funding and based in grassroots democracy and social justice that speaks for a peaceful and a healthy planet. “Opening up the ballot is good for North Carolina and will help to reinvigorate the political process,” said Tony Ndege, state party co-chair and member of the Steering Committee of the Green Party of the United States. “People have given up on the two-party system, and too many voters stay home on Election Day. The largest party right now is the disaffected American -- people are hungry for real grassroots participation in politics and in their communities. The North Carolina Green Party looks forward to giving people a reason to engage and fight for the future that we all deserve.”

Voters may register Green beginning today; they don’t have to wait while the State Board of Elections prints new voter registration forms. To register Green, voters may check the "Other" box in the Political Party Affiliation section of their registration form and then write in the word "Green" on the blank line. Their registration will be counted and they will become affiliated to vote with the Green Party after mailing the form to their county board of elections.