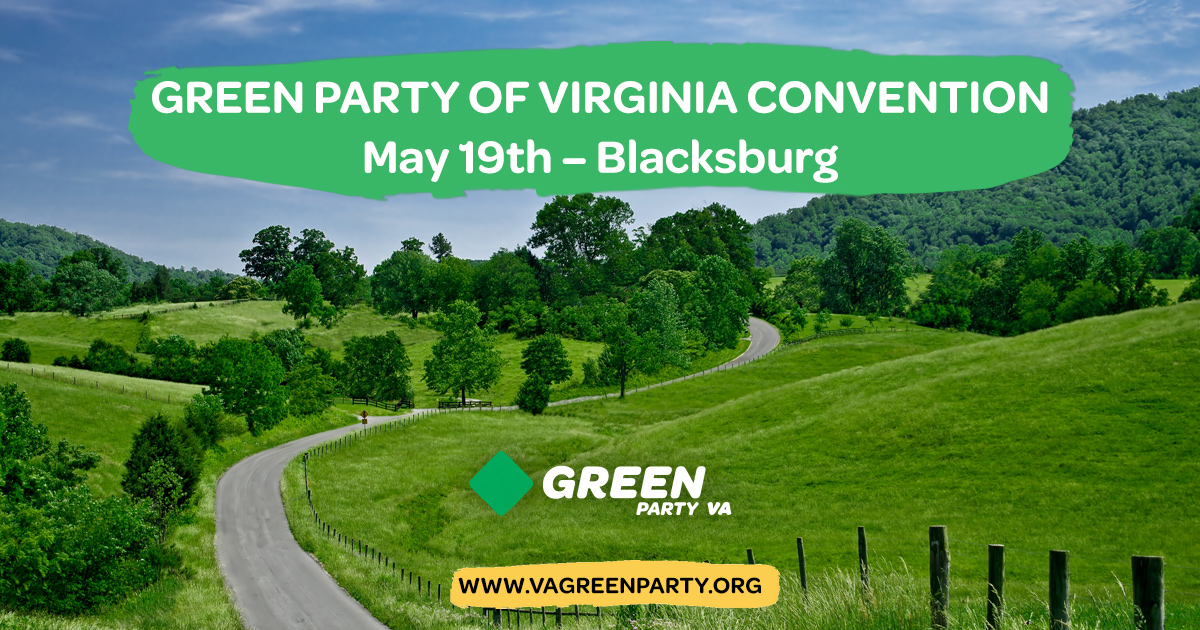 The afternoon portion of the Green Party of Virginia State Meeting will feature a panel discussion on the pipeline(s) with many experts.  You can go to the facebook page for a quick overview.  You can also read the invitation below from the New River Valley Greens if you want more in-depth info.   Hope to see you there!

The panel is free and open to the public. Parking will be most convenient at the Squires lot on college avenue behind Squires Student Center. Parking is free as it is a weekend. Downtown parking will also be free.

From the Chair of the New River Valley Greens:

As many of you already know, our Commonwealth faces an unprecedented threat from the Atlantic Coast and Mountain Valley Pipelines that are currently destroying some of our most beautiful lands and fragile ecosystems. Many Virginians, as well as West Virginians and North Carolinians, have been fighting the projects since they were announced over three years ago. Other citizens are fighting fracked gas infrastructure in other states as well. Of course, our candidates for President and Vice President in 2016, Jill Stein and Ajamu Baraka, went to Standing Rock to voice our solidarity with those fighting the DAPL. Our former Green Party Vice Presidential candidate Winona LaDuke also spoke out against it. It is obvious that continued reliance and certainly expansion of fossil fuels and their infrastructure is in conflict with our pillar of environmental wisdom as well as against our national policy positions. Our state Green Party has also issued a statement against the two pipeline projects. But we must do more.

The afternoon program of the upcoming GPVA state meeting will be a panel discussion of fighters of both the ACP and MVP from across Virginia. It will be open to the general public, so that we can let more people know that we are the genuine and progressive environmental party of Virginia. Both the major two haves of the duopoly are for these pipelines. But recently, activists and landowners alike have successfully used direct action, including "tree-sits," to protest and slow construction, gaining unprecedented media attention for the cause. Some of the more progressive Democratic delegates have come out against the pipelines to implore Governor Northam, the leader of their own party, to halt construction and require a stream by stream analysis from the DEQ, which he promised to do while campaigning against the antipipeline candidate, Perriello, in the primary last year. Senator Kaine, now running for reelection, has issued a letter calling for a rehearing by the Federal Energy Regulatory Commission (FERC) because the full board did not hear the request, just two recent Trump appointees and one Obama Commissioner, who issued a rare dissent. Last week some 18 Democratic Committees in Virginia, after over three years and last year's Governor's race, have issued a joint statement against the pipelines. Virginians need to know that the Democratic Party is why a 61-year-old mother and her daughter have to starve themselves in trees on their own land to stop these pipelines. Virginians need to know that "Nutty" has been blocking MVP from boring through the Appalachian Trail by sitting alone on top of a pole on Peters Mountain while the Forest Service denies her food, water and medical care since last February. They need to know they have a better, Green choice.

Interest in the pipelines has never been higher and print, broadcast and digital media will be invited to cover our event. So will elected politicians and candidates. We can use our party meeting to strike a blow against these pipelines and make a real impression on opinion leaders from Lee County in the west to Virginia Beach in the east and Fredrick County in the north to Mecklenburg County in the south. Come to the meeting and connect with your fellow Greens and other progressives and independents in the pipeline fight. Show your solidarity and commitment to our values of Peace, Social Justice, Grassroots Democracy and Ecologiclal Wisdom. Help put Virgina Greens on the map with a statewide cause every local can get behind. Don't let the hollow cries of the Dems about the environment and the crocodile tears of Repugs over property rights steal this issue from us. We must turn out in impressive numbers to be taken seriously. Many non-partisan, non-profit, single-issue groups with a stake in the fight don't realize they have a real, alternative and progressive voice with the GPVA on Election Day and everyday.

Show up Saturday, May 19th to prove it to them.

The Pipeline Fighters' Panel will take place in Haymarket Theater in Squires Student Center on the Virginia Tech campus in Blacksburg at 2:00pm on Saturday, May 19th. Parking is available in the Squires lot on College Avenue, on the edge of campus and near downtown. The Blacksburg Transit is also available. You can come in the morning and check out the nearby Farmer's Market on Draper, have brunch or lunch downtown, participate in the panel discussion in the afternoon, then visit one of our many parks and trails, or maybe explore Virginia Tech. Farther afield there's always the Cascades, the New River and the Appalachian Trail. You can even "take the scenic route" home on the Blue Ridge Parkway or Skyline Drive.

On behalf of all of us with the New River Valley Greens, we proudly invite you to Blacksburg for the GPVA state party meeting. The event is free and open to the public. Parking will also be free in the Squires lot on College ave. behind Squire Student Center. Parking will be free downtown at metered spots as well.

LOCATION: Room 219, Squires Student Center, Virginia Tech, Blacksburg. Remote access will be available. connection details will be sent via the listservs a few days before the meeting.

NOTE TO LC MEMBERS: PLEASE PREPARE WRITTEN REPORTS AND SEND THEM TO THE BUSINESS LIST AT LEAST A FEW DAYS BEFORE THE MEETING.

INTRODUCTION (10 min.)
Choose facilitator, note taker, timekeeper, vibes watcher. (Note for our new members: Anyone can take on any one of these roles for a business meeting. If you would like to volunteer to take one of these roles you are free to do so, or someone may nominate you to do so. In the event two or more people are interested in serving in the same role, a co-chair will poll the members present regarding their preference. Facilitators should be familiar with both consensus practice and parliamentary norms, and possessed of both patience and self-confidence.)

OFFICIAL REPORTS (3 minutes each -- total 30 mins).
Detailed reports should be submitted in writing to the business list-serve, and highlights only briefly summarized at the meeting.)