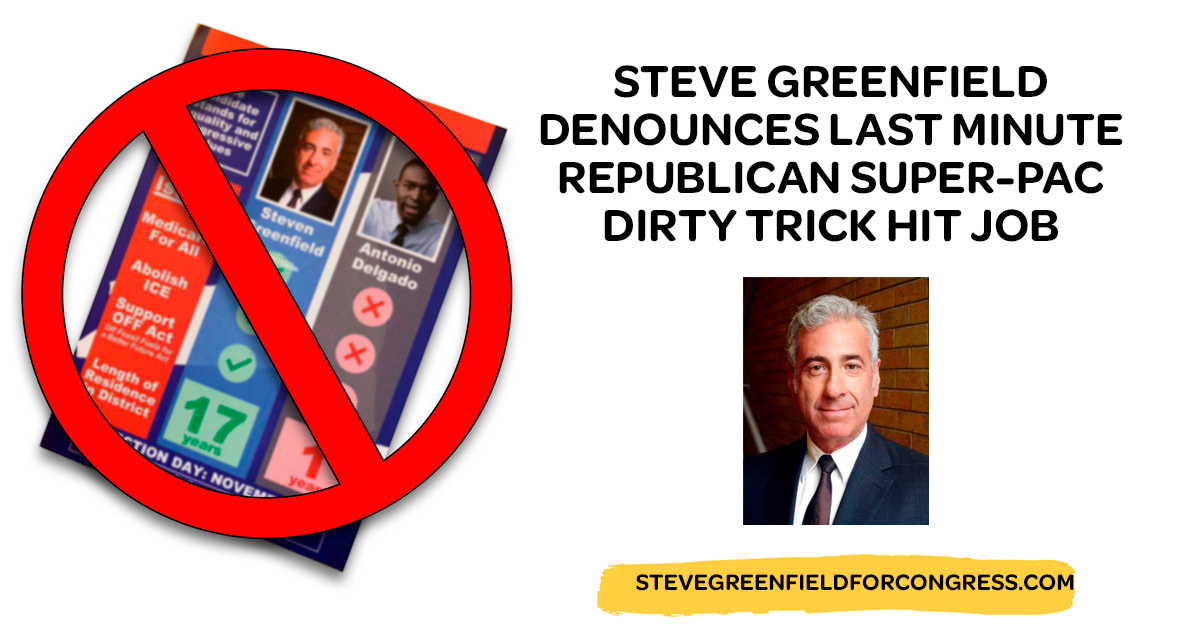 It has come to my attention that today I became the unwitting, unwilling "beneficiary" of a Republican PAC in Texas that has delivered $49,000 worth of mailers, robocalls, and social media ads exclusively to registered Democrats in New York's 19th Congressional District, attacking Antonio Delgado, and comparing him unfavorably to me. This expenditure is almost 50 times my total advertising budget.

I denounce both the message and the messengers. I am as much a victim of this dirty trick as the candidate it purports to undermine. It appropriates my campaign photo without the permission of me or the photographer, and deliberately and maliciously misrepresents me personally, and the themes of my campaign.

Nowhere on my website will you find the word "progressive." I have never presented myself as a "more progressive," or "purer," or "truer" version of liberalism and Democrats, nor does the Green Party present itself that way. I have never targeted Democratic Party voters, nor directly compared myself to Mr. Delgado apart from comparing myself to Congressman Faso, which I have done expressly to show how completely distinct I am from both of them. I do not use the words "left" or "right" in describing my candidacy, or comparing it to others.

Furthermore, as my lone radio advertisement, going only as far as $2000 could buy, clearly states at its outset, and repeats as its theme, and as is written in my "closing argument" social media statement, my outreach has been to non-voters, not to supporters of either major party.

In closing, again, I denounce the messages and the messengers. But I also denounce the federal campaign finance laws that not only allow this to happen, but encourage it. It took both major parties, working together for decades, to make it legal, and viable in practice. For this reason and so many more, I and the Green Party support fully publicly funded elections, and ranked choice voting so that both the uninformed arguing over "spoiling," as well as negative campaigning, can be ended forever, and put us on a path towards something resembling democracy.

I encourage the media to investigate this Super PAC and its donors.

https://www.fightfortomorrowny.com note it lists an Oneonta address, even though it is in Texas.

Money spent -- just on me, and one Republican candidate in Texas.
https://www.opensecrets.org/pacs/lookup2.php?strID=C00549279