Greens condemn airstrike against Iran, call to pull back from brink of war 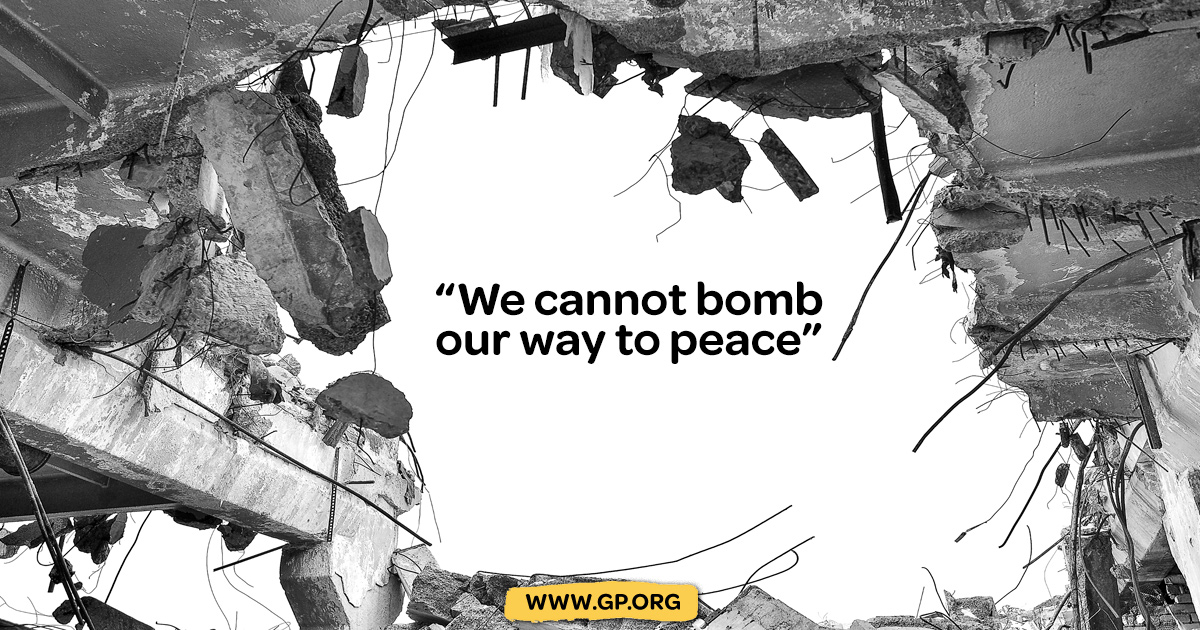 WASHINGTON D.C. – Green Party leaders strongly condemned Thursday’s airstrike in Iraq near the Baghdad airport. Greens also called for Congress to repeal the Authorization for Use of Military Force (AUMF) and restrict the President’s ability to direct more attacks.

“The Green Party fundamentally opposes preemptive military aggression and advocates diplomacy and nonviolent solutions to crises in the Middle East,” said Rita Jacobs, co-chair of the Green Party Peace Action Committee (GPAX). “This reckless attack threatens the lives of countless Iranians, Iraqis and Americans by leading the region to the brink of war.”

At least five people were killed in the drone attack, including Major General Qasem Soleimani of the Iranian Islamic Revolutionary Guard and Chief of the elite Quds Force Corps. The bombing also killed Abu Mahdi al-Muhandis, pro-Iranian chief of an umbrella group for Iraqi militias.

The U.S. Department of Defense confirmed they had acted on President Trump’s orders. The Green Party, however, rejects the Trump administration’s claim that the attack was intended to protect Americans in Iraq.

Bahram Zandi, co-chair of the Green Party’s International Committee, noted, “It is difficult to construe this airstrike as a defensive action, as the incident that was supposedly the basis for the airstrike was already on the way to being successfully resolved. We demand that our government adheres to international law, including the Kellogg-Briand Pact, Nuremberg Charter and United Nations Charter, which prohibit any and all preemptive wars or first strikes with any and all weaponry, nuclear and non-nuclear.“

"U.S. military aggression serves war profiteers, not the people,” said Lisa Savage, Green Party candidate for U.S. Senate from Maine. “We cannot bomb our way to a peaceful resolution of the conflict zone our nation has created in Iraq, nor is deliberately provoking Iran in our best interests as a nation. Diplomacy and the restoration of congressional authority over the president's use of the U.S. military are urgently needed. We need senators and congresspeople willing to stand up to the Pentagon and the executive branch of government to say no to more warmongering."

The Green Platform calls for the repeal of the Authorization for Use of Military Force (AUMF) 2001, and opposes other measures 'authorizing' preemptive or illegal military actions, delegating to the president sole power to commit acts of war.

Green Party leaders are calling on members, elected officials and candidates to join peace organizations such as Code Pink and Popular Resistance in the streets this Saturday to demand an end to U.S. aggression in the region.