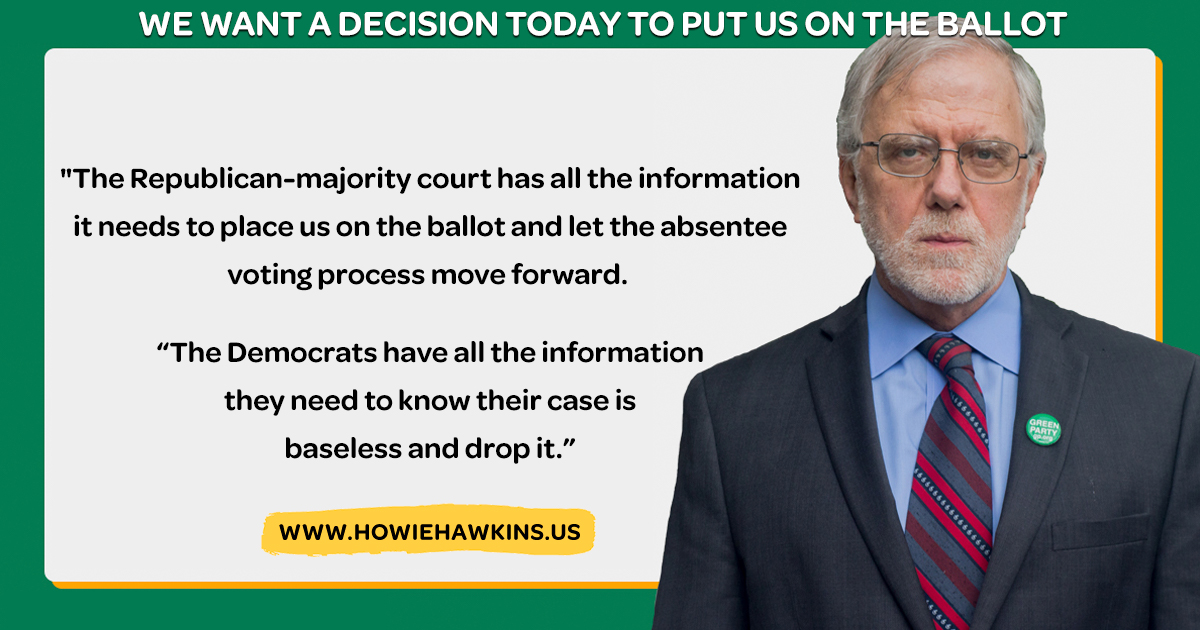 (SYRACUSE, NY - September 14, 2020) The Green Party candidates for president and vice-president are demanding that the Wisconsin Supreme Court put them on the ballot today.

"The court should have made a decision by now. We want a decision today to put us on the ballot. We want the absentee ballot process to proceed without further delay," said Howie Hawkins, the Green presidential candidate.

The delay in the printing of the absentee ballots that are supposed to be mailed out by September 17 was precipitated by objections by Democratic members of the Wisconsin Elections Commission (WEC). WEC staff certified that over 3,000 signatures on the Greens' ballot petitions were from qualified voters, well over the 2,000 required.

However, Democrats objected that vice presidential candidate Angela Walker did not properly inform the WEC of her address change within her current home town of Florence, South Carolina. At an August 20 hearing on the the case, a motion to place the Greens on the ballot failed 3-3 in a partisan vote by the commissioners. The Greens appealed to the Wisconsin Supreme Court. Republican justices on the court bench hold a 4-3 majority.

"I filed my address change properly to the Wisconsin Elections Commission as they instructed me to when our campaign informed them of my address change. The Democrat chairing the hearing concerning Democratic objections to my filing prevented that documentation from being presented. They had that information in hand. The Democratic commissioners could have resolved the problem last month at the hearing. Instead, they are playing politics with Wisconsin voters. They could end this now by withdrawing their phony objections. The Democratic commissioners are as guilty as the Republican justices in this hold-up of absentee ballots," said Angela Walker, the Greens' vice presidential candidate.

Hawkins said the court's request for information last Tuesday on whether ballots had been mailed is now moot. No ballots were mailed, according to reporting by the Milwaukee Sentinel Journal.

"The Republican-majority court has all the information it needs to place us on the ballot and let the absentee voting process move forward. The Democrats have all the information they need to know their case is baseless and drop it. It's time for both parties stop this partisan jockeying at the expense of Wisconsin voters," Hawkins said.

"We have been campaigning to end voter suppression, whether by discriminatory photo ID laws or by suppressing third party alternatives. We want everyone who is voting by absentee ballot due to the COVID crisis to have their vote count. Voters should have all their options on the ballot. It is time for the Democrats and Republicans to stop using the election law to manipulate the election results. The court should stand up today for democracy," said Walker, a Milwaukee native who won 20% of the vote for Sheriff of Milwaukee County in 2014 as an independent socialist against the conservative Democratic incumbent, David Clarke.