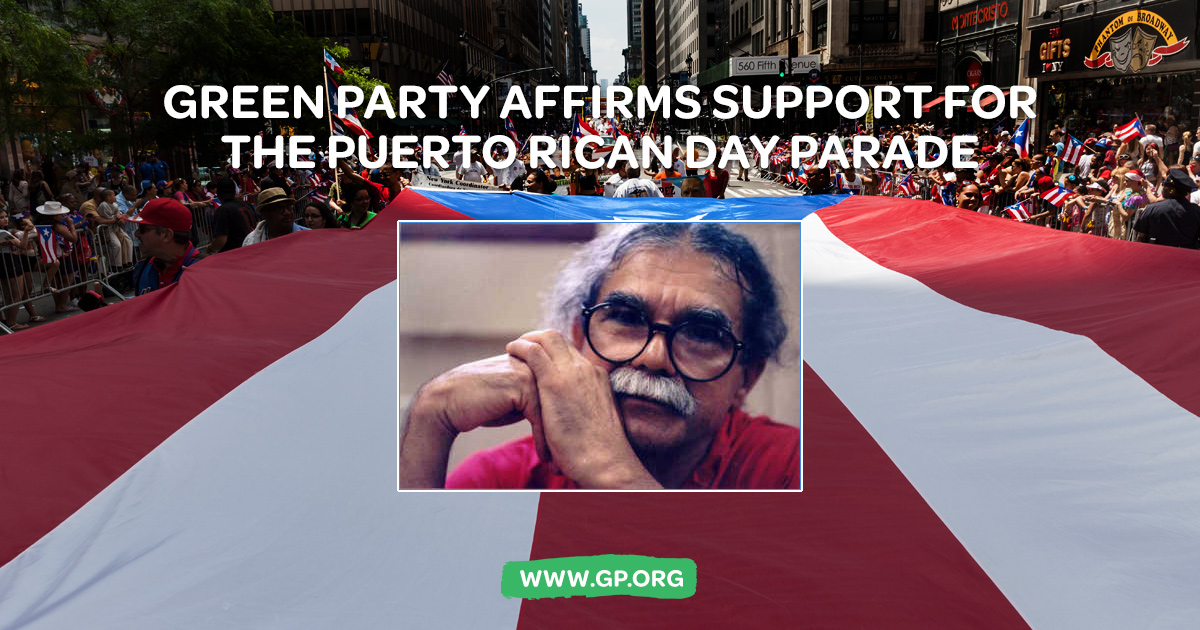 Statement by Darlene Elias on Puerto Rican independence and the parade

"The same sponsors and participants who are pulling out of the parade because of Mr. López Rivera's past role in the Puerto Rican liberation movement never hesitate to support events commemorating the American Revolution, which was also an armed insurrection by those seeking freedom and independence," said Mr. López.

The Green Party of the United States endorses independence, decolonization, and self-determination for Puerto Rico in its national platform.

Darlene Elias, co-chair of the Latinx Caucus who also serves on the Green Party's national steering committee, released a statement on the Puerto Rican Day Parade:

"Puerto Rico has struggled with being a colony for 525 years of which the United States of America has been the colonizer for 119 years. This colonial status did not change when the United States invaded the island and seized control of the island from Spain in 1898. In 1917 Congress imposed US citizenship and Congress approved the local 'Constitution of the Commonwealth of Puerto Rico' in 1952.

"It has been determined by all levels of government that Puerto Rico is a possession of the United States of America and therefore a colony under International law. More recently the establishment of the Fiscal Control Board by the Promesa Bill signed into law by Congress on June 30, 2016 to oversee the restructuring of the $73 billion debt of Puerto Rico is evidence of the same.

"The history of Puerto Rico has been one where it has never been able to surmount the social and economic disparities that plague its people and island. The United States, its banks, corporations, and venture capitalists have always seen to it that any prosperity that was to be had by the island would be clutched by them.

"Puerto Rico and its people deserve the right to fashion the circumstances upon which they will prevail. This includes not allowing for their agenda of self preservation to be determined by corporations.

"Although there exist controversy around the recent release of Puerto Rican pro nationalist Oscar López Rivera from prison, it is clear to us he is an anti-colonial activist who strongly supports the right of Puerto Rico to self-determination.

"For this reason, the Green Party of of the United States salutes the New York Puerto Rican Parade in their effort to allow for the people to determine who and when they will uplift as leaders of their cause. Viva Puerto Rico Libre!"

Green Party thanks President Obama for pardons for Oscar López Rivera and Chelsea Manning, urges pardons for all other political prisoners and whistle-blowers
Press release: Green Party of the United States, January 17, 2017Green Party endorses Day in Solidarity with the Independence of Puerto Rico on June 17

An inalienable right that can not be renounced
By Hector Lopez, Green Papers, April 9, 2017