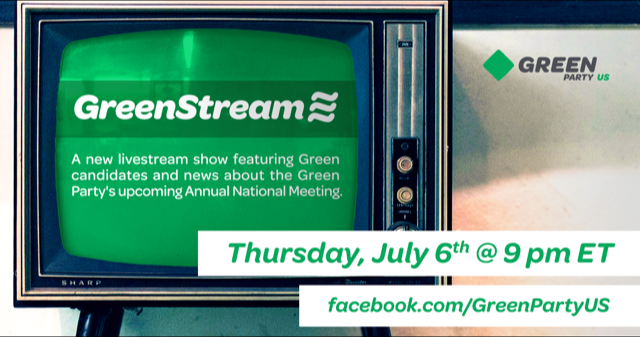 The Green Party of the United States will air a half-hour livestream show GreenStream on the party's Facebook page on Thursday, July 6.

Among the GreenStream interviewees:

Seth Kaper-Dale, Green candidate for Governor of New Jersey, one of two states with a gubernatorial race in 2017. Mr. Kaper-Dale is obliged to raise $430,000 by Aug. 31 to qualify for the gubernatorial debates and receive a 2:1 match in funding. The amount of campaign funds raised is the sole criterion for participation. Mr. Kaper-Dale is a pastor and migrants' rights advocate who has worked to prevent the deportation of Indonesian migrants for over a decade, in the wake of the 9/11 attacks.
https://www.kaperdaleforgovernor.com

Jessica Clayton, Green candidate for School Board in in the town of Brick. Ms. Clayton will make sure children in her district get recess everyday and have more play in early childhood. She will also encourage teachers to use class time to teach social emotional skills instead of using stop light behavior charts.
https://jessica-clayton.wixsite.com/jclaytonboe