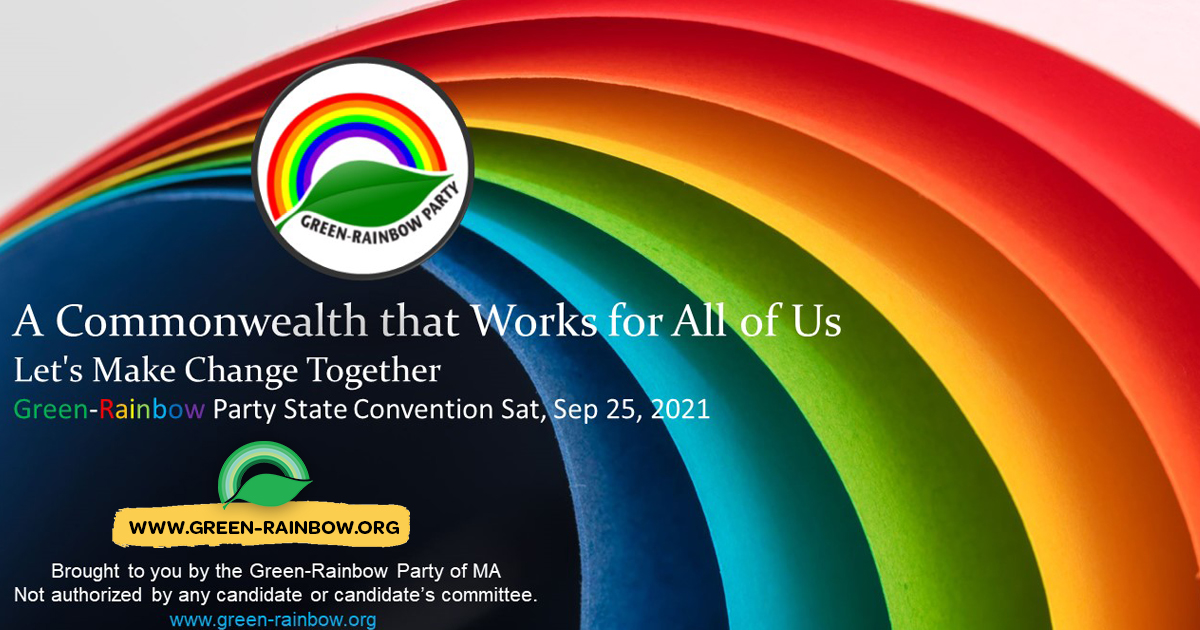 Please note that some of our usual procedures have been adapted to the requirements of a Zoom meeting!

See how to register as a voting member or as an observer.

See the positions up for election at the Convention, together with their responsibilities.

To be eligible to run, candidates must be registered as a Green-Rainbow (J) voter with their election board by midnight, August 31. Candidates must declare by emailing their registered name, and the position(s) they are running for, to [email protected].

Votes cast at the Convention will be tallied using the ranked-choice voting methodology.

A Commonwealth That Works for All of Us

Our exciting agenda includes national leaders of our party, local activists, and committed citizens who understand the need for change "now" not in some distant future. We explore issues of defending our democracy, racial justice, local elections, community climate action, and a national healthcare plan that works for all.

A brief preview of the various presentations follows:

Greens and the Crisis of Democracy: Challenging Power, Changing Course

Dr. Jill Stein, twice US presidential candidate for the Green Party US, physician, longtime political, environmental, and public health activist will keynote our opening session. She will address how Greens are the ones we have been waiting for--despite being censored and suppressed--as long as we lead the charge to defend people, planet, and peace in America.

A Massachusetts Truth and Reconciliation Proposal

Kevin Peterson is a nationally recognized leader in promoting racial justice through local action. Founder of the New Democracy Coalition, he holds hunger fasts to demand the renaming of Faneuil Hall, a Boston landmark with a history of slavery. This is part and parcel of a broader effort to establish a racial "truth and reconciliation" process for the Commonwealth. His efforts have been critical to electoral redistricting which has enhanced the representation of people of color in the Boston and Massachusetts political process. His reach is far beyond Boston, however. He has presented both nationally and throughout the world on the critical issue of enhancing civic awareness, understanding, and participation in the peoples' democracy.

Dr. Caballero Roca is a local organizer and political activist who demonstrates the principle of "think globally, but act locally". Her roots and commitment are anchored in a global experience and understanding while bringing her skills to the local political scene. She speaks as an "independent" running for Mayor of Holyoke while subscribing to the values of the GRP and basing her campaign on the principle of "grassroots democracy".

Lynn Benander in collaboration with Dr. Jill Stein will facilitate “Powering Up for Community Climate Action, Justice & Equity”. Our co-facilitators bring deep experience and commitment to environmental justice and sustainability. In addition to Dr. Jill Stein’s previously stated experience, Lynn Benander brings a passion for addressing the challenges of sustainability and justice with multi-class, multi-racial movement building. She is an experienced educator, facilitator, and participatory manager who uses her education and mathematics background to bring people together to understand technical and financial challenges and then create and implement innovative solutions.

Workshop on a National HealthCare Plan

Don Fitz, author of "Cuban Health Care: The Ongoing Revolution" will explain how experiences in that country can be useful in designing a US national health care system to address the needs of all citizens. Not only has Cuba truly achieved "health care for all" it has consistently contributed to the health and well-being of the global community in its response to wars, pandemics, and natural disasters. The information Don will share will provide us with inspiration in our own struggle as well as provide a means of assessing our own dysfunctional healthcare system and the stumbling blocks that exist within it."

In addition to addressing critical and inspiring presentations, the convention conducts our annual election of officers and delegates for the coming year.

Officers to be elected for the coming year include:

Our party, the Massachusetts Green-Rainbow Party, does not shy away from the critical issues of our time. We do not indulge in divide and conquer politics. We state our 10 Key Values forthrightly for all to see and understand. We take thoughtful positions on all the critical issues of our time. It is these things that differentiate us from the twin parties of War and Wall Street.

There is an increasing hunger among the general population for an independent, third party to rise up and challenge the entrenched political parties that have brought us perpetual war, environmental collapse, unprecedented economic and racial inequality. Day in and day out our party works to address these issues and build a world and community of peace and justice. We encourage you to join us on September 25 and bring your energy to our party to create "A Commonwealth That Works for All of Us'' 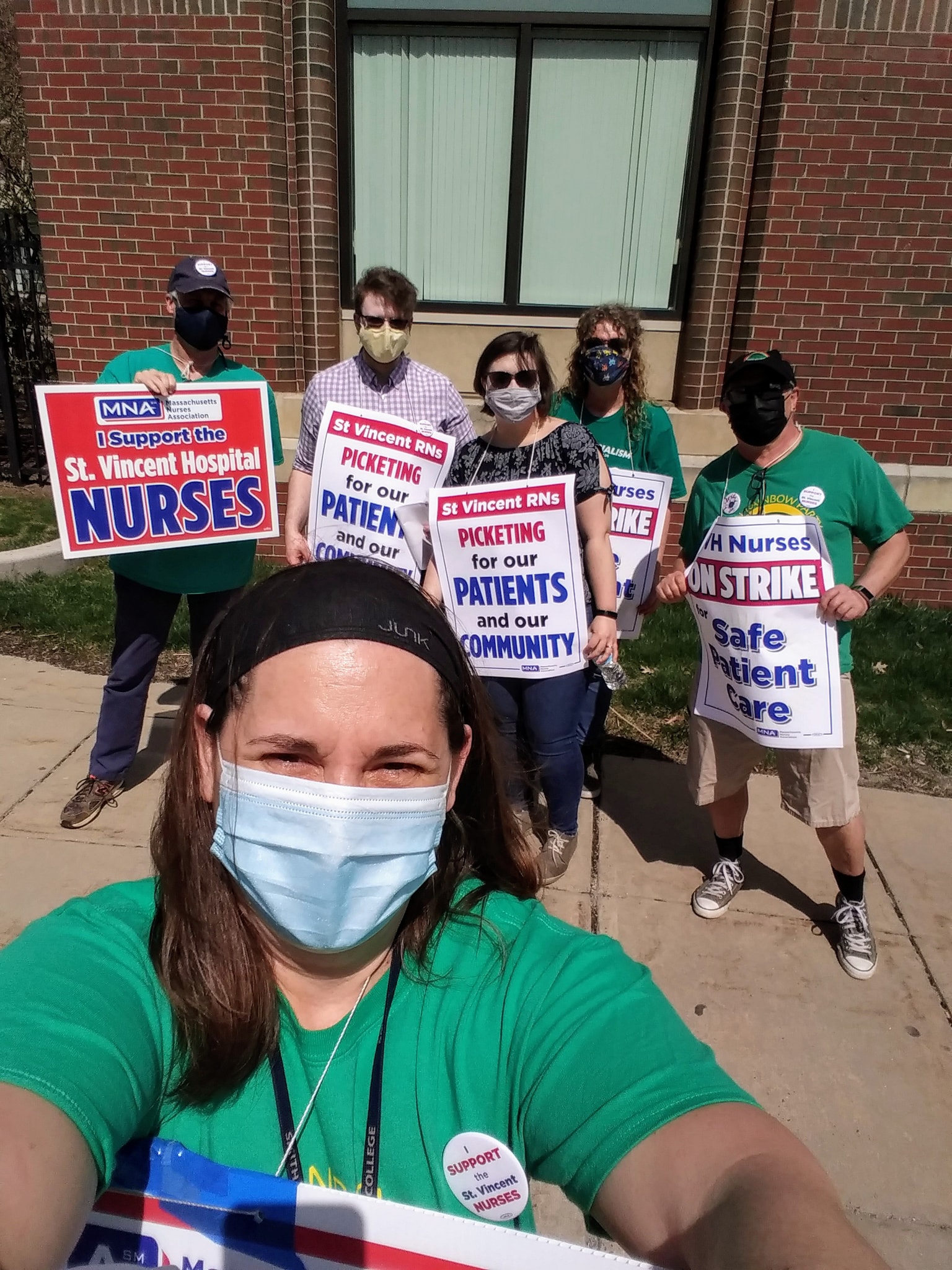 If you are unable to attend and wish to join our efforts of support for "People, Planet, and Peace" be certain to sign up for future issues of the "Voices of Massachusetts Greens". Here you will find continuing information on GRP efforts to create a sustainable, just world from our local efforts (read about the defeat of the Carvana proposal in Southwick which saved 60 acres of farmland from destruction), or our collective efforts to bring justice for Julian Assange while also supporting nurses of St. Vincent Hospital, healthcare reform, and other pressing issues chronically ignored by our two-party political system.

Many thanks to Roni Beal and her indefatigable Convention Planning Committee for meeting the challenges of a remote meeting in these challenging times.