Hate Groups Not Welcome In Charlottesvile — Or In Virginia 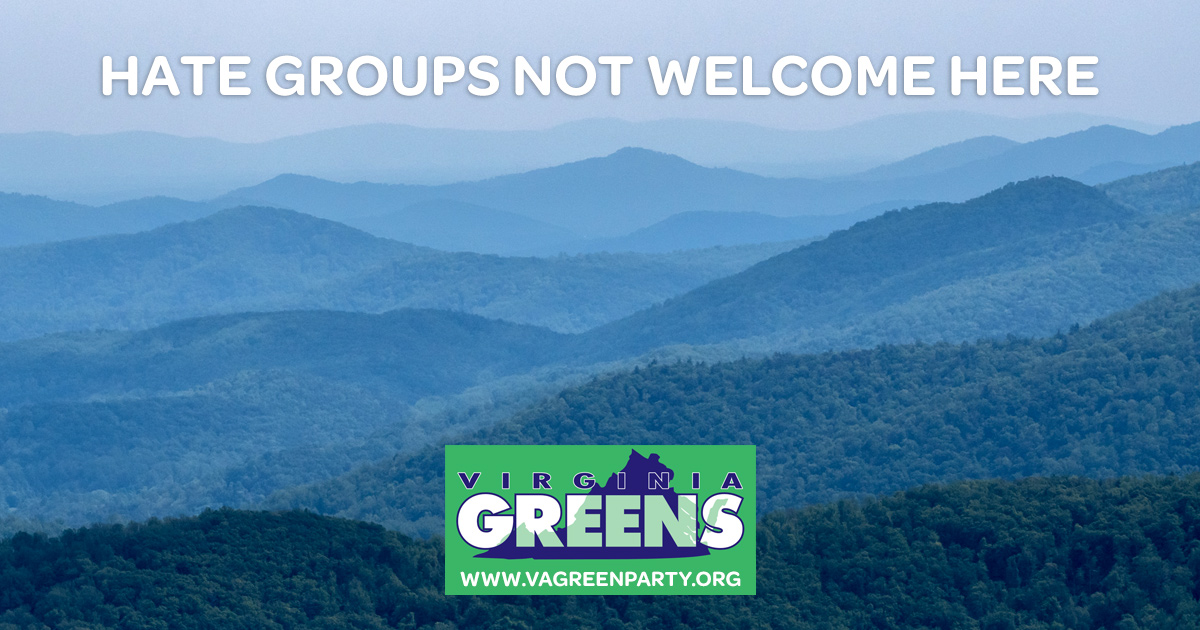 RICHMOND, VA - Hundreds of haters will gather in Charlottesville, Virginia on Saturday, and the Green Party of Virginia joins with millions of our citizens in proclaiming that there is no place for them in our commonwealth. They represent what the Southern Poverty Law Center describes as "a broad spectrum of far-right extremist groups – from immigration foes to anti-Semitic bigots, neo-Confederates, Proud Boys, Patriot and militia types, outlaw bikers, swastika-wearing neo-Nazis, white nationalists and Ku Klux Klan members," rallying under the banner "Unite the Right."

Committed to a false notion of racial identity, these groups seek to stimulate and legitimize racist stereotypes, and to promote discrimination and worse against their fellow Americans under a white-supremacist banner. At a time when ethnic minorities, especially Black and Arab Americans, must live in constant fear of racially-motivated violence, it is intolerable that demagogues and race-baiters should exploit the hardships felt by all working Americans to increase racial tension. We call upon all Virginians and especially all of our elected leaders, to publicly denounce the Unite the Right gathering.

A much smaller gathering in Charlottesville in May erupted in violence, and cost city taxpayers tens of thousands of dollars in police and other costs. Saturday's rally is set to be many times larger, and is expected to draw a correspondingly larger number of counter-protesters. The likelihood that this will overwhelm the city's police, even with help from the state police, greatly increases the potential for violence and civil disorder. Such an outcome would serve no one's interests but that of the hate groups themselves.

While the GPVA honors the rights and the legitimate moral outrage of those who will stand up to the Unite the Right rally in a counter-protest, we urge our members and any others planning to counter-protest to faithfully model the ideals of non-violence and democracy. As champions of racial and social justice, we must not only say what is wrong about the rally, but also show by our deeds what genuine activism looks like. GPVA co-chair B. Sidney Smith said, "It is occasions like this that test our commitment to our ideals. Let the world see that Americans will give no energy to fascist or racist or supremacist movements. Hate longs for confrontation, especially violent confrontation. What we must offer instead is our solidarity, our commitment to justice, and our silent contempt for those who would divide us."