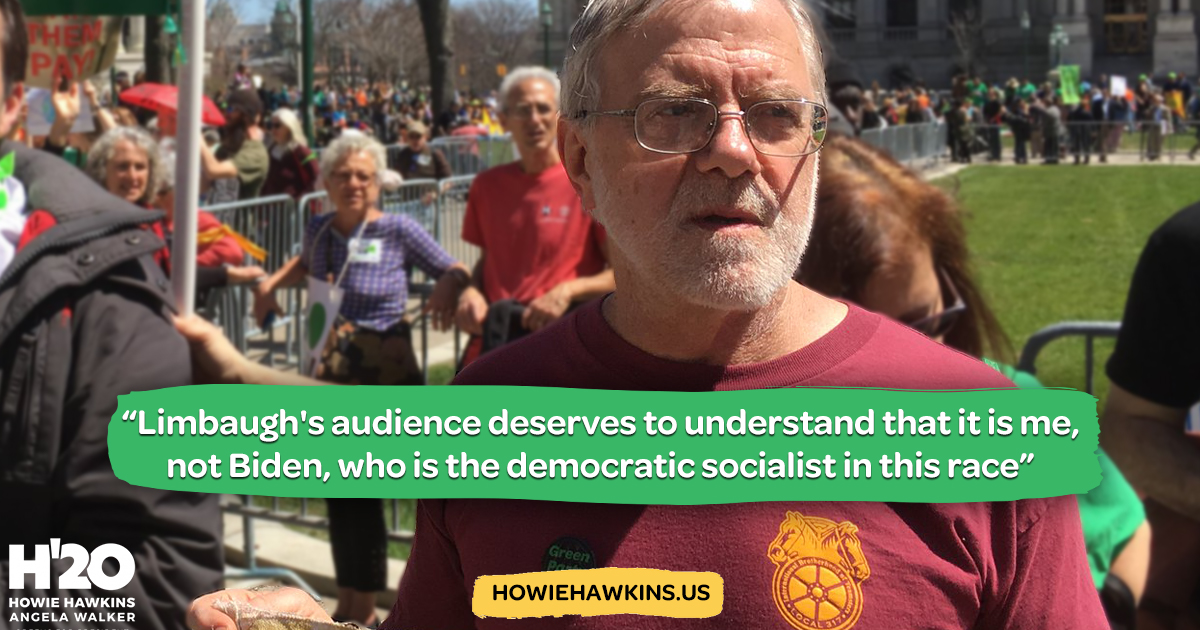 Howie Hawkins, the Green Party candidate for president, is demanding equal time on the The Rush Limbaugh Show after Limbaugh hosted a 2-hour "radio rally" for Trump on Friday.

In a letter to Limbaugh, Hawkins invoked the equal time rule of the Communications Act of 1934 to ask Limbaugh to contact him to arrange a date and programming format for equal time for Hawkins.

Including the other states where he is an official write-in candidate, 96% of Americans representing 514 of a possible 538 electoral voters will be able to vote for the Green presidential ticket. Angela Walker, a veteran labor and racial justice activist in Florence, South Carolina, is the Green candidate for vice president.

Hawkins said he wants equal time to speak to Limbaugh listeners because many live in media markets where the only news/talk commercial radio station on the dial features arch-conservative programming 24 hours a day, as is the case in Hawkins' home town of Syracuse, New York.

The equal time rule is not the same as the fairness doctrine, a former policy of the Federal Communications Commissions that it revoked in 1987. The fairness doctrine had required federally licensed broadcasters to present balanced points of view on controversial matters of public importance.

I am the Green Party candidate to be President of the United States. I am hereby invoking my right to equal time on your program under 47 U.S.C. 315 (a) to match the "radio rally" you conducted Friday, October 9, 2020, with Republican Party candidate Donald Trump to advance his 2020 president ambitions. Please contact me to arrange a date and programming format for your compliance with section 315 (a).