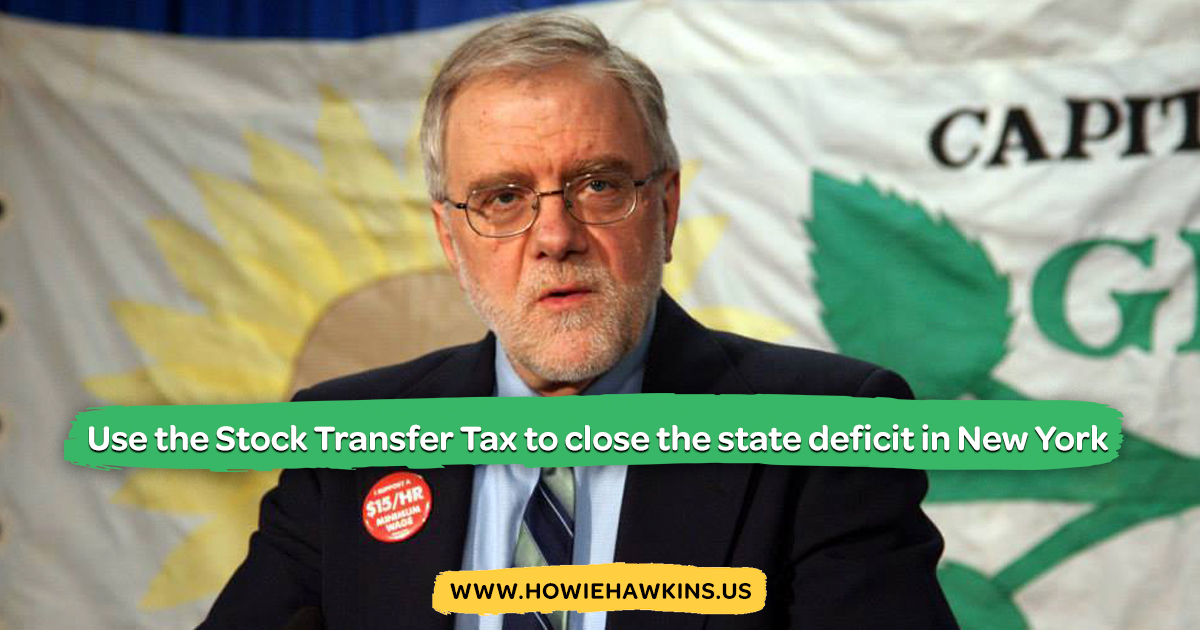 SYRACUSE, NY — With the breakdown of congressional negotiations on a COVID-19 relief package, Howie Hawkins called on Governor Cuomo today to close the state budget deficit by keeping billions of dollars in revenues from the Stock Transfer Tax. The state currently rebates those revenues fully to stock traders.

Hawkins is the Green Party's presidential candidate. He was the party's candidate for governor three times against Cuomo.

"Governor Cuomo should keep the billions in Stock Transfer Tax revenues that the state is already collecting instead of making his threatened 20% cuts to education, health care, and local governments. This tax alone would cover almost all of the projected state deficits," Hawkins said.

Cuomo wrote to the New York congressional delegation on July 29 that if Congress does not enact a COVID-19 Relief Package with aid to state and local governments, New York will cut state funding of schools, hospitals, and local governments by 20%. These cuts would come on top of an austere state budget adopted in April that featured a $1.6 billion cut to Medicaid while COVID-19 deaths in New York were spiking.

The Stock Transfer Tax is pennies per share but adds up to billions of dollars annually due to today's automated high-frequency algorithmic trading systems. The tax has raised an average of $13 billion per year over the last ten years. The state faces a $14 billion deficit this year and a $16 billion deficit in 2021.

Legislation to repeal the rebate of the Stock Transfer Tax has been introduced in the State Assembly (A07791) and Senate (S06203).

The Stock Transfer Tax provided revenues to New York State between 1905 and 1981. Since 1981, the state has rebated 100 percent of the revenues to stock traders.

Hawkins noted that during economic crises like the current COVID-19 economic collapse, Stock Transfer Tax revenues tend to rise with increased stock volatility and volume while other state revenue sources decline, including taxes on personal income, corporate income, and sales. Stock trading volume has been up to record levels in this year's pandemic-driven stock market volatility.

The Stock Transfer Tax is paid disproportionately by the wealthy. Among American households, the wealthiest 1% owns 50% of all stocks and the top 10% owns 84%, directly or indirectly through trust, pension, and mutual funds. New York has the most unequal income distribution of any state, with the top 1%'s share of all income growing from 12% in 1980 to 33% in 2015.