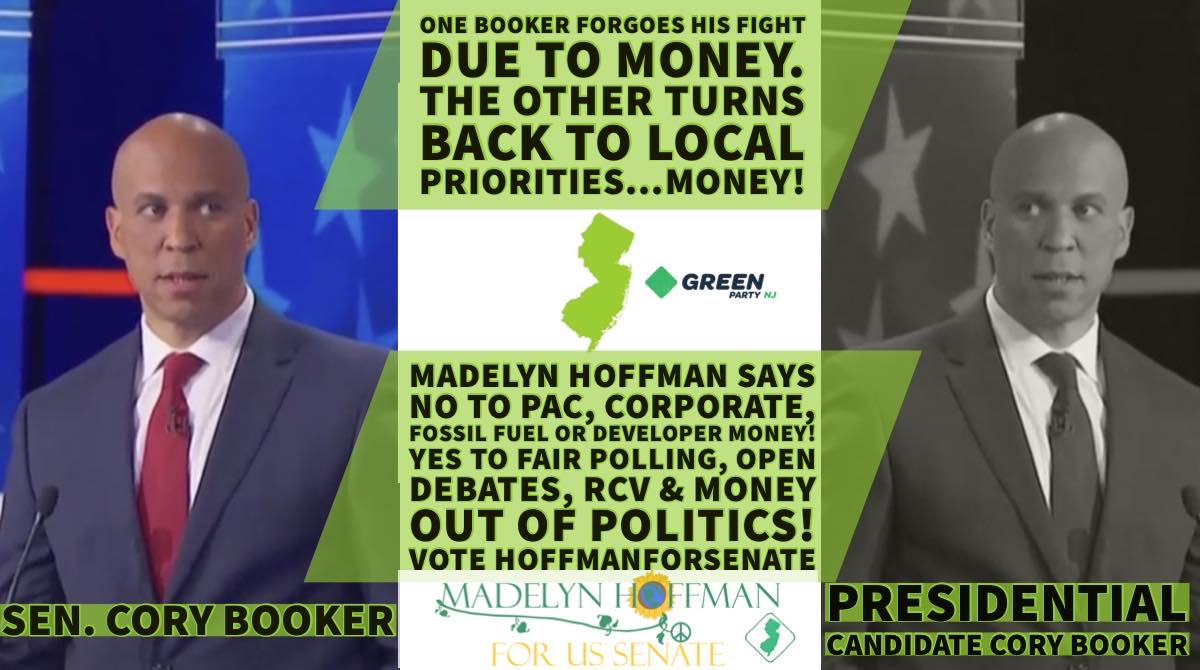 FLANDERS, NJ – “And now there is only one candidate Booker, ... the candidate for U.S. Senate” said Madelyn Hoffman. “We get why he dropped out. If anyone knows about the difficulties of competing on a level playing field in the U.S. electoral system, it’s the Green Party. We know all too well the story of being left out of important debates, presidential or otherwise, because we haven’t raised enough money or scored high enough in ‘polls’. These polls can be manipulated by corporate or special interests in our cases to even fail to include us.

The difference with running as a Green is that unlike candidates within the two mainstream parties, Greens make a conscious and principled position not to take money from Political Action Committees (PAC). My campaign refuses to take corporate PAC money from the fossil fuels industry, the military-industrial complex, pharmaceuticals and more. The Green Party believes that this country needs for  money to be taken out of politics. We also call for RCV- Ranked Choice Voting throughout the country, including New Jersey -- allowing the voter to vote their conscience first and foremost over their fears.”

“It’s wrong that our political system is dominated by those who can raise the most money -- when that happens the candidates are owned by those elite donors. Now that Senator Booker will return to campaigning in New Jersey, we will pay close attention to where he gets his money and what interests they represent.”

“In contrast, my campaign will represent the people, from start to finish. I will be there in November as a progressive anti-war, anti-imperialist candidate, pushing for more grassroots democracy. New Jersey, it’s time for more choice at the voting booth and for a candidate that supports a real Green New Deal, one that confronts the billions of dollars being directed at the military budget. Which robs our cities and communities of the dollars needed to address water contamination, public education, single-payer Medicare for all, veterans’ benefits and so much more.”