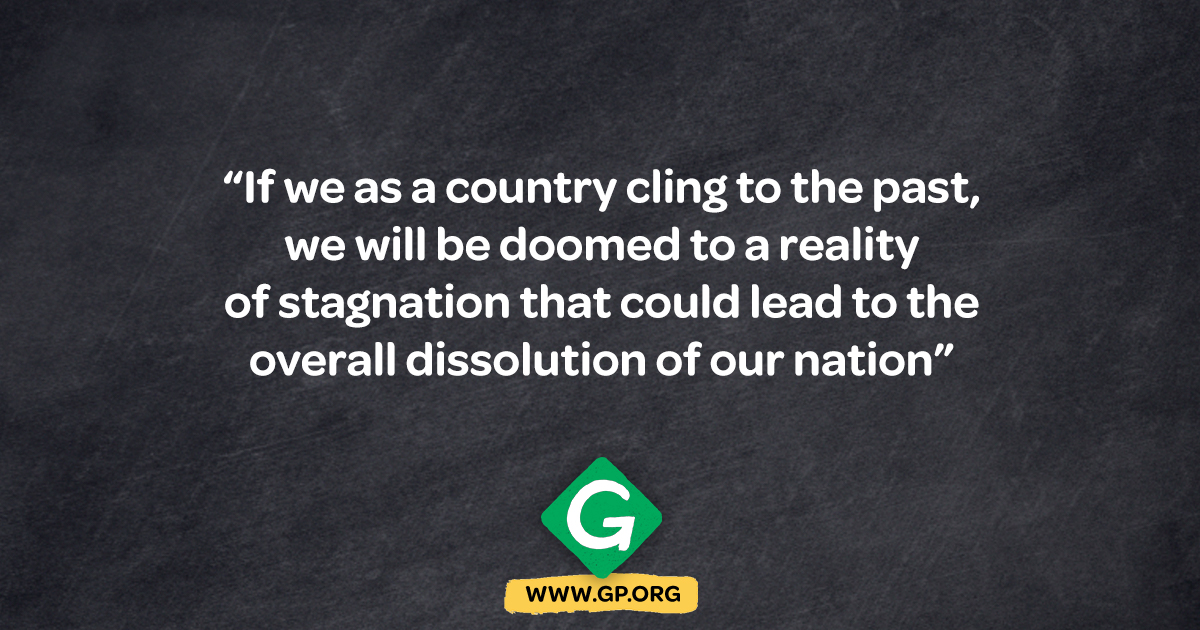 I'm an American living abroad in the UK, so for this year's election I filled out an absentee ballot. Following the rules to 'fold here' and 'tape there', I was prepped and prepared to fulfil my civic duty and tick the Biden/Harris box.

After all, we've been told countless times that voting for the candidates best poised to beat Donald Trump and Mike Pence is the first step to saving America.

But I couldn't do it. After spending a summer breaking lockdown rules to stop traffic in the name of George Floyd, speaking up at my job about the racism that my Black colleagues and I face, and risking deportation, I couldn't vote Democrat.

I voted Green, instead.

Like a persistent ex, the election team for Joe Biden and his running mate Kamala Harris have been calling and texting me. It also feels like their media campaign has targeted disillusioned voters like me, asking the Blackest, queerest and poorest of countrymen to take part in that most glorified act of democracy: the election.

Voting is hailed as the beacon that will guide the planet out of the tumultuous storms known as populism, nationalism, fascism, and all the other nasty mindsets we thought had been left behind in the days of World War II.

Despite this hopeful narrative, I don't believe that I can save America from itself and, sometimes, I honestly don't think people like me should feel obliged to. It shouldn't be the role of the marginalised to step up and save a country that has failed to step up for me.

But we have to do something. People are dying, and so is the planet. To do nothing would be just as complicit as doing the wrong thing. So I sat there, and looked at my options.

Voting for Trump/Pence? Out of the question: my ancestors would slap me on sight.

Casting my ballot for Biden/Harris? To be fair, Kamala Harris went to a historically Black college like me and she is a member of Alpha Kappa Alpha, the sister sorority to my fraternity. But Joe Biden is 77 – he would be the oldest president the country has ever had – and far from perfect himself.

And those are my choices, right?

Contrary to popular belief, that's not strictly the case. If you glance a little bit over to the right on the ballot, you'll notice some other names that the general public might not have heard until the time to vote actually came – those of candidates outside the well-known brackets of Republican and Democrat.

These names have the potential to do impressive things, but currently lack the power to make an impact. And though many liberals see it as blasphemous to vote for one of them on this occasion, saying that not voting for Biden basically puts Trump back in office, I believe it's exactly the right time to change that narrative.

As a Black, queer American, I chose to vote Green for the first time to push for the dramatic political reform that is so needed in the States. The Green Party aims to not only deal with pressing issues that plague us daily, including policing, healthcare access and abortion rights, but also reform America's political system itself.

Unlike the Democratic Party, which has existed since 1828 and has become part of the political establishment, the Green Party is malleable enough to be transformed into a party that can truly represent disillusioned voters who, like myself, seek representation that is more nuanced, critical, and inclusive of newer realities and ideas – thereby changing the American political landscape dramatically.

I don't need to list for you the now-over 200,000 reasons why I couldn't vote for Trump – by this point, many people will be able to guess, but his handling of the coronavirus crisis is just one.

What may anger and disturb some who read this are the reasons why I also found it impossible to go with Biden as well.

For one, he authored the 1994 'tough on crime' law that supported mass incarceration and contributed to the racist criminal justice practices that we know and hate today, such as tougher prison sentences and encouraging police officers to make more drug-related arrests.

Then there's his opposition to busing in the 1970s, when children would be driven to schools in different neighbourhoods in order to help combat racial segregation. Although Biden has upheld other civil rights efforts, such as same-sex marriage (although he was previously opposed to it in the past) and the legalisation of abortion, in the case of busing, his white constituents' desire to exclude Black children from their schools took precedence over equality.

I believe that Joe Biden isn't trying to fix issues like racism, but would rather maintain them to please the white Democratic majority that flinches when they hear the phrase 'defund the police'. Biden has even pledged to spend $300m so that more police officers can be hired, albeit with the condition that new hires reflect the racial diversity of communities.

What's more, Biden doesn't seek to reform his party or the outdated political system, like the Electoral College (the state-based system that means presidents can be elected without winning the popular vote, as Trump did in 2016) or filibustering (a tactic senators can use to stop measures from being voted on, by extending the debate – usually by talking for a long time).

Changes to problems like these could benefit and empower all of the voices – not just the Black and brown ones – within this struggling democracy.

However, these are things I believe the Green Party value. Their principles include the democratisation of the media, racial justice and an ecological – rather than capitalist – vision for society, which I find appealing.

But the core reason why I turned towards them, and away from the Democrats, is my longing for structural change. At its heart, the Green Party represents the possibility of mass political reform by changing the rigid two-party system and offering a third option.

This is something I believe is necessary in order for America to thrive and not just survive the coming storms, because if we as a country cling to the past, we will be doomed to a reality of stagnation that could lead to the overall dissolution of our nation.

Now, when people ask me how I voted in the last election, I'm always prepared for the backlash: because, I didn't. I was leaving for the UK and my vote would have been cast for New York, which was guaranteed in favour of Hillary Clinton. Selfishly, I thought 'to hell with this place' and sat it out. But I know now that total inaction is part of the problem.

No matter who comes out on top, in the words of my mother: we will endure, as Black folks always have in this land. I believe that if Trump wins again – which is a possibility – this may well exacerbate the toxicity that we are all facing in the world now.

But, equally, if Biden gets the presidency, I believe he would seek to uphold a political reality that centres profits over people.

A Biden win won't mean the destruction of a system that has never worked for people like me. Either candidate's success will continue a cycle of capitalism, which will keep causing the suffering of those who are oppressed.

I just can't support any candidate who doesn't wish to transform the political system in America anymore. Voter disillusionment needs to be addressed and harnessed into an opportunity for change.

Inalienable human rights, such as healthcare access for all; the preservation of our planet, and the crazy idea that Black people should not be killed by the police, are what the Green Party ticket represents – and for me, voting for them was the only way to get behind my hope for a truly better American society.

Though I'm 99.9% sure that my candidate won't become president this year, my vote is not a wasted one.

It was a Black, queer ballot that symbolised my call for a massive overhaul of a political system that does not benefit me or many others like me.