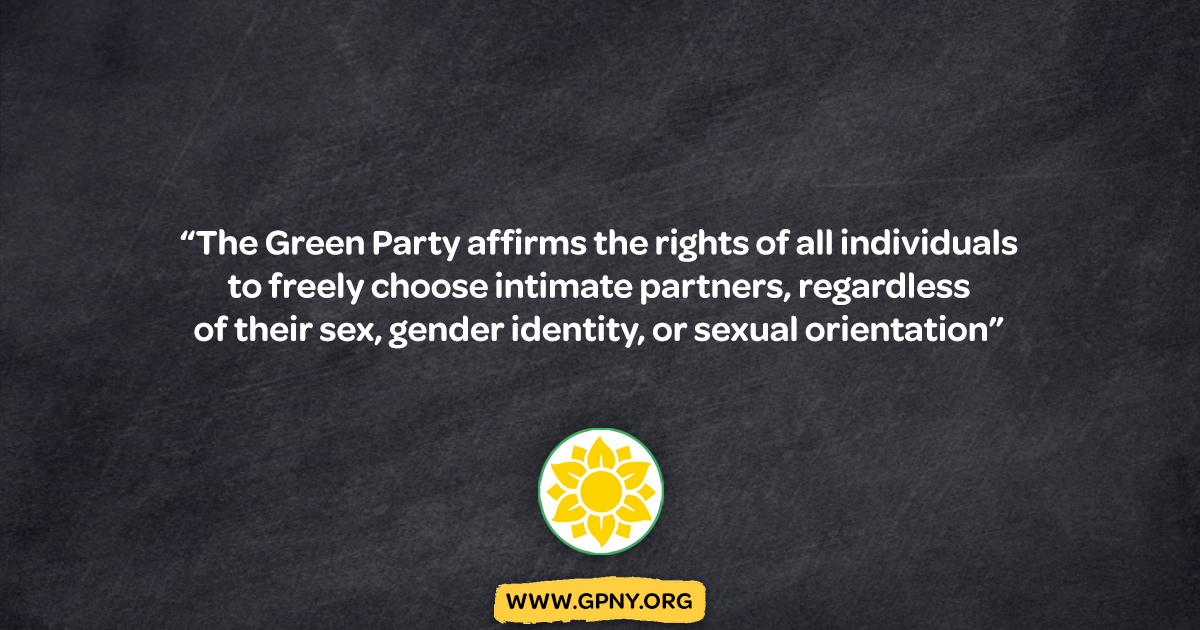 It is clear from discussions among Green Party of New York (GPNY) state committee members that there are considerable concerns regarding both the content of the Declaration and the Georgia Green Party’s endorsement of it.

The GPNY endorses the recent statement by the Green Party of the United States (GPUS) Steering Committee on this matter:

The Green Party of the United States Steering Committee affirms the rights of all individuals -- in particular those that identify as transgender, non-binary, and/or otherwise gender non-conforming -- to indentify as they see fit. Transgender rights are human rights period full stop. The Green Party has long been a supporter of the LGBTQIAA+ community and that has not changed, despite the unfortunate statements of one of our state parties in recent weeks.  We understand that there is an attempt at mediation and reconciliation between the Georgia Green Party and the Lavender Caucus. We are hopeful this effort will help us move forward as an organization united in our quest to gain political power in service to the 10 Key Values.

Additionally, we affirm the rights of our paid staff, members of a recognized union, to work in a peaceful and respectful environment free from harassment and personal attacks, particularly by members of this party, the very people whom they tirelessly serve. Doxing, callouts, and violent language are not OK. We have internal mechanisms to air grievances and we request that anyone with an issue with our staff (or anyone else in the party for that matter) seek remedies through those channels.

Additionally, GPNY calls attention to our own platform language on sexual orientation and gender identity as follows:

The Green Party affirms the rights of all individuals to freely choose intimate partners, regardless of their sex, gender identity, or sexual orientation. The Green Party recognizes the equal rights of all persons whether they identify as straight, gay, lesbian, bisexual, intersex, transsexual, queer, transgender, etc. to housing, jobs, marriage, medical benefits, child custody, and in all areas of life including equal tax treatment. We support a ban on conversion therapy. We support the Gender Expression Non-Discrimination Act to outlaw discrimination based on gender identity or expression. GENDA also expands the state's hate crimes law to explicitly include crimes against transgender people. We support increased funding to assist queer homeless youth.

Now, more than ever, the rights of transgender individuals need to be protected.