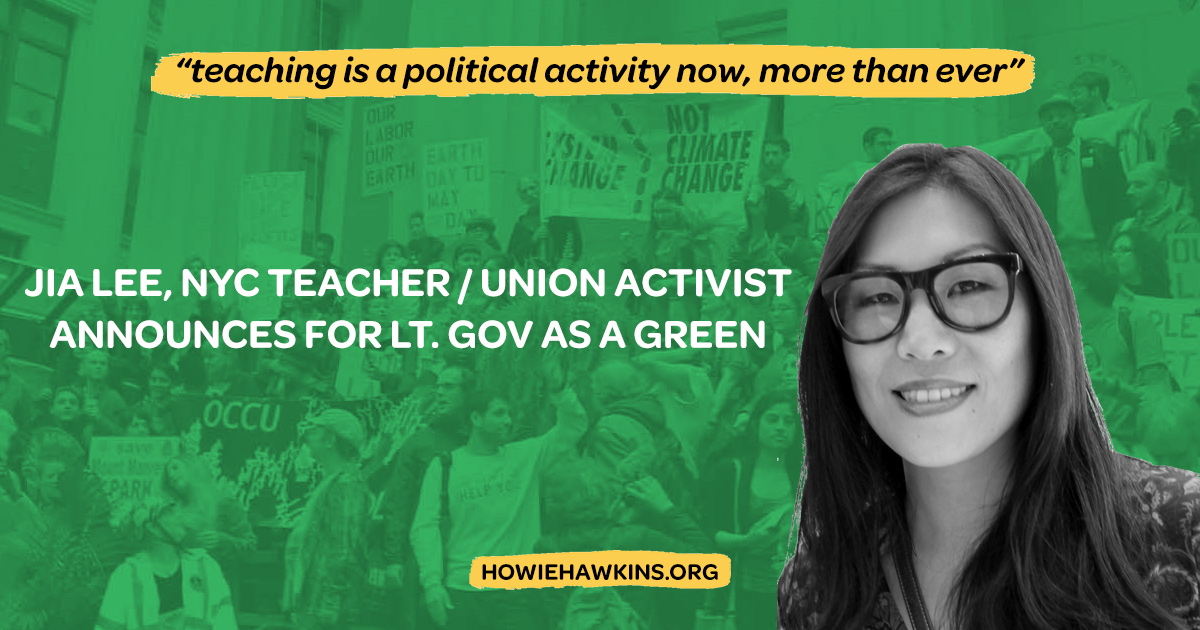 NEW YORK, 4/25/2018 -- Jia Lee, a New York City special education teacher of seventeen years, announced today that she will seek the Green Party nomination for Lt. Governor. She will make education the focal point of her campaign.

Lee, a public school parent, was the Movement of Rank and File Educators (MORE) candidate for president of the United Federation of Teachers union in 2016. She has served as her school's union chapter leader for over eight years. She has been active in NYC Opt Out and Change the Stakes, a grassroots coalition of parents, teachers and community members who are concerned with the destructive use of high-stakes standardized testing. In 2016, she testified before the U.S. H.E.L.P. Senate Committee on the re-authorization of E.S.E.A. (the federal Elementary and Secondary Education Act of 1965) on Testing and Accountability.

"As many of us have come to realize, teaching is a political activity now, more than ever. Public schools, our profession and our students are under attack by the state. As a public school special education teacher, the curriculum I am told to teach my fourth and fifth grade students, flies in direct contradiction with the realities we are living," said Lee.

The Fiscal Policy Institute issued a report in 2016 entitled, "New York State Leads Nation in Income Inequality." They found that "the top 1 percent earned 45 times more than the bottom 99 percent in New York, the greatest disparity of any state."

"Governor Cuomo and his friends have paved the way for the 1% to direct decisions around public education policies that would funnel our tax dollars into their for-profit education enterprises," added Lee.

Lee noted that while New York is heralded as one of the wealthiest states, with higher-than-average per-pupil spending in public schools than the rest of the country, "it has been a carefully orchestrated smoke-and-mirrors game. Within the confines of our state borders is a divide and conquer strategy. New York has probably the most diverse public school systems in the nation but it is the most segregated. Students in predominantly Black and Brown communities are disproportionately impacted by the test and punish system and crippling underfunding as evidenced through the Campaign for Fiscal Equity" Lee noted.

In the poorest districts in the Bronx and Brooklyn, an average of two public schools are shut down every year and hedge fund-backed charter schools appear with their test-prep focus and non-union staffs.

Lee was endorsed by Green Party Gubernatorial candidate Howie Hawkins. "Andrew Cuomo's education policies are terrible. They under-fund high-proverty school districts, do nothing to desegregate the nation's most segregated schools, and push high-stakes testing that narrows the curriculum for all students and is used to privatize high-poverty public schools into charter schools. He also under-funds the SUNY system and fails to provide true tuition-free, public college. As a teacher, Jia Lee knows these problems first hand. As an activist, she has been at the forefront of movements for positive changes on these issues. I couldn't ask for a better running-mate," Hawkins said.

"The governor continues to take millions of dollars in entitlements from private, for-profit entities to enact racist policies that are designed to cripple and undermine public education," said Lee. "We must call for fully-funded public schools, an end to zero-tolerance policies and a full stop on the behind-closed-doors negotiations to give away our public school tax dollars. The only path to ensuring a democratized public education system is not only to replace a corrupt administration but to envision a structure that is truly representative of its people and not the 1%. For these reasons, I would be honored to receive the Green Party's nomination for Lt. Governor of New York."

The Green Party will hold its nominating convention for statewide candidates in Albany on May 19th.