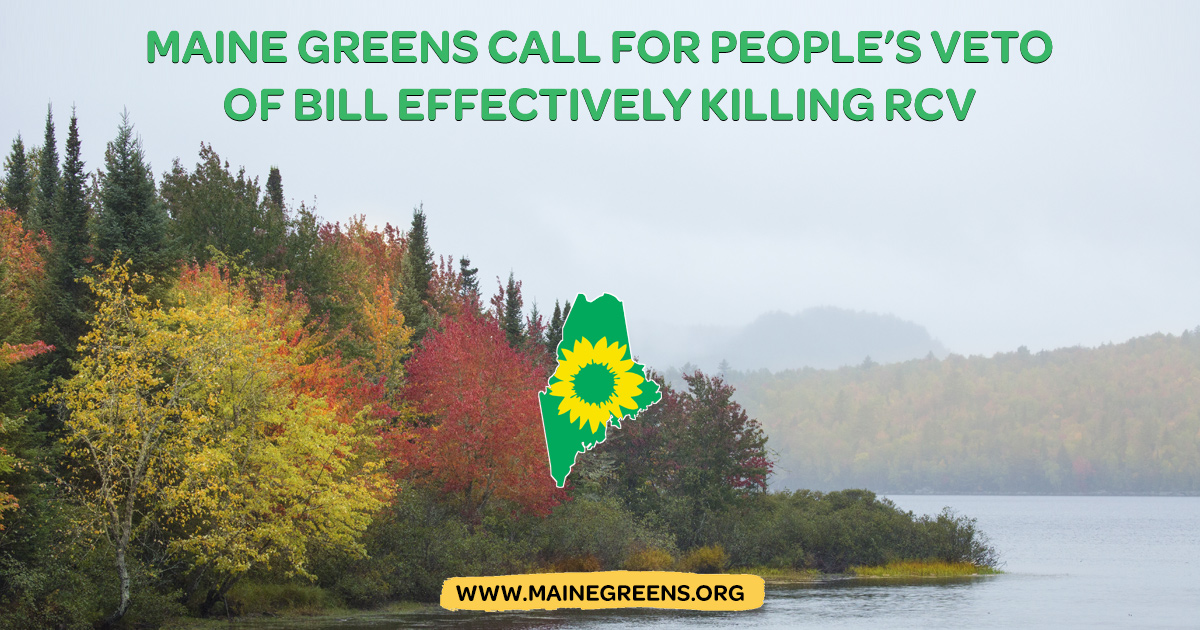 Maine Green Independent Party co-chairs Riva O'Rourke and Jon Olsen today condemned the Maine State Legislature's actions in special session yesterday in passing passed LD 1646, "An Act To Implement Ranked Choice Voting in 2021." This bill, supported by members of both the Democratic and Republican parties, "sabotages the citizen referendum on ranked choice voting," said Olsen and O'Rourke. "This vote severely damages our first-in-the nation statewide effort to initiate RCV, and may have dealt it a fatal blow."

While the bill in name implements RCV in 2021, in truth it does nothing of the sort, as many dissenting but ultimately unsuccessful legislators noted. Rather, it places obligations on future legislatures. Unless, by Dec. 1, 2021, the constitution is amended, RCV is completely repealed. The MGIP believes this is unacceptable.

"This sort of disregard for the people's will is a big part of my decision to run for governor," said Betsy Marsano, who announced her candidacy earlier this month. "For too long has our leadership in Augusta ignored everyday Mainers who expressed their will at the ballot box, only to see their interests go unaddressed by the legislature and the Blaine House."

The MGIP understands the concern over a recent advisory opinion from the justices of the Maine Supreme Judicial Court. However, some races, such as those for federal offices, are completely unaffected by the Maine Constitution. RCV as passed by the voters could have been implemented for those races and allowed to proceed as mandated in the referendum vote without any fear of constitutional conflict.

The MGIP believes that by yet again ignoring the will of the voters—as expressed with the second-largest majority on record for a referendum vote, no less—legislative majority has overstepped its role. "The Maine people have spoken," said Olsen and O'Rourke. "We should be working to get as close to immediate implementation of RCV as possible.”

“We intend to oppose vigorously those legislators who voted to sabotage the referendum vote,” said Olsen and O’Rourke. Already, in part due to the legislature’s failure to implement the people’s will, State Rep. Ralph Chapman (G—Brooksville) has switched from Democrat to Green Independent. Greens welcome any other Democrats to join us in our efforts.

Further, the Maine Green Independent Party calls for and intends to initiate a people's veto of this law and calls for a coalition of parties and organizations to come together and defeat, for the first time since 2010, a law passed by the Maine State Legislature.