Manley to run for School Board 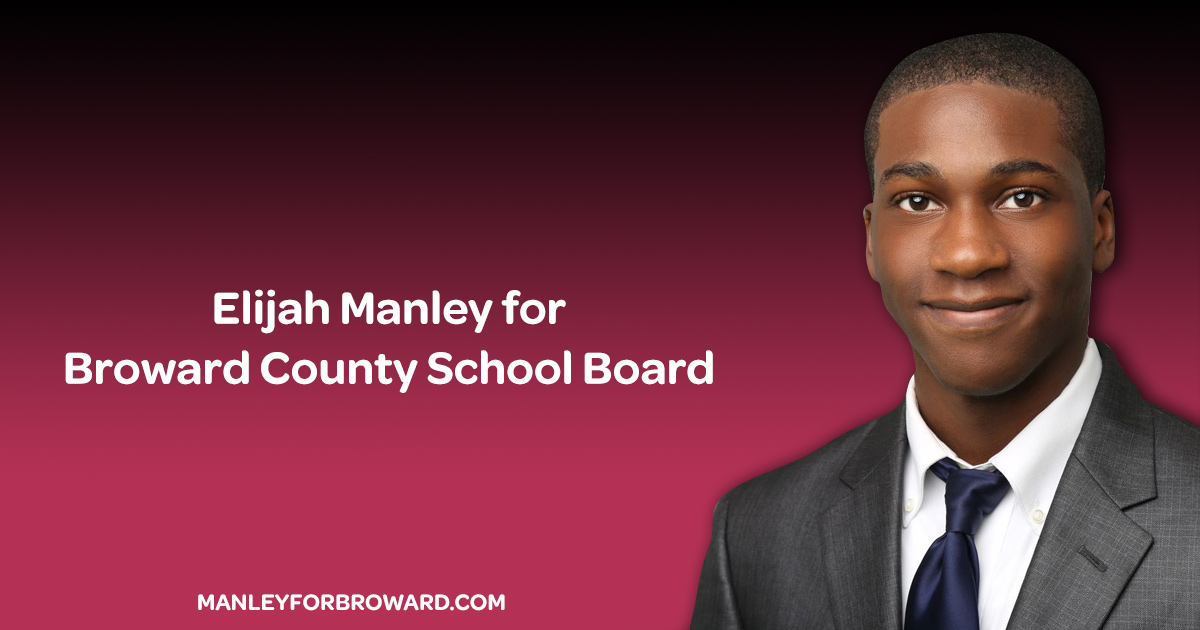 Elijah Manley to file for qualification to run for School Board, At-Large Seat #8 for the elections of August 28th, 2018

Fort Lauderdale, Florida – Elijah Manley has been running for the school board of Broward County, At-large Seat #8 since February 2017. Manley is the youngest candidate to run for school board in the county’s history, at age 19. He has raised more than $10k as of April 2018, to challenge incumbent school board member Donna Pilger Korn. As one of the youngest candidates to run in the 2018 elections, Mr. Manley has had his fair share of ageism, political attacks and smears. However, he has chosen to remain in this race in the wake of high political polarization and welcomes Mr. Ryan Petty and others to the race.

Mr. Manley believes that it is beyond time that this district gets to work to make our schools safer, and more transparent. He believes that this can be accomplished by rebuilding our schools and its crumbling infrastructure, having transparency with the remaining $645m in the General Obligations Bond, and holding the Superintendent accountable. None of these are easy tasks, and Mr. Manley will be the first to tell you. Since joining this race, he has taken upon himself the responsibility of exposing unsafe and unhealthy school conditions. Rather those conditions be mold and mildew, or security lapses, Manley has been the first to make these known to media. Manley believes that we have a “top-heavy” school district, underpaid teachers, and non-instructional staff. We have a district that has failed the students, parents, and community members of Parkland and beyond.

Manley also affirms his support of the PROMISE program, which has been under attack recently, following the tragic and unfortunate shooting at Marjory Stoneman Douglas High School in February. The PROMISE program has reduced the recidivism rate, and has created an alternative to prison for some of the county’s most desperate students. Most of these students deserve the opportunity to remain in the classroom and learn from their mistakes. However, he believes that we must reform the program to include more people and that we must move to the practice of restorative justice, and address lack of mental health funding.

On Tuesday June 5th, 2018, Mr. Manley will be filing for qualifications to run for the at-large seat in 2018. Following his filing, he will be holding a press conference in the lobby of the Broward County Governmental Center at noon. Mr. Manley is looking forward to a prosperous and victorious election cycle, and wishes all the candidates the best.