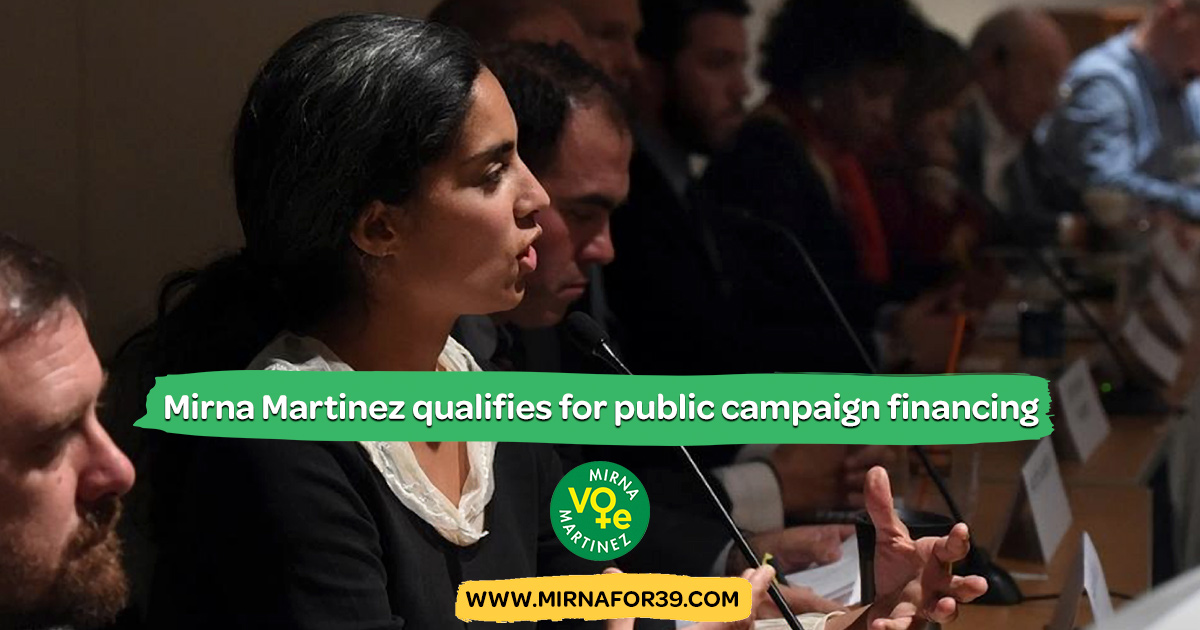 New London, CT – Green Party candidate Mirna Martínez, who is running for the 39th House District seat recently vacated by Chris Soto in New London, has qualified for a campaign grant through the State Election Enforcement Commission’s Citizens’ Election Program (CEP). This marks one of the first times in CEP history that a minor party candidate has qualified for such a grant.

Through the CEP, all candidates are required to gather a certain number of dollars in small campaign contributions (under $250 per donor) from a minimum number of in-district contributions. In this special election, participating candidates raised over $3,800 from a minimum of 113 donors residing in the city. The Mirna for 39th campaign committee was notified last Friday that it has met the donation threshold and will be recommended for approval at the commission meeting on Wednesday, February 13, 2019.

On top of the other thresholds, minor party candidates are required to submit a petition to the state with signatures totaling a specific number based on how many votes were cast in the previous election for the sought position. The committee has submitted nearly 900 signatures in order to qualify for a minor party grant, and on Monday, New London City Clerk Jonathan Ayala confirmed that 690 signatures have been accepted. Martínez will receive a 2/3 "partial" grant of just over $14,000 based on submitting more than 660 signatures. Given that a full grant was not received, which would have required 881 valid signature submissions, the campaign will be allowed to conduct additional fundraising to close the gap. Due to the compressed timeline of the February 26 special election, all petition signatures were collected in under four weeks. The effort was challenging due to cold days and early nightfall, but petitioners were encouraged by the positive response to the Martínez campaign and the prospect of meaningful change in Hartford.

Additionally, the first endorsements of the election have been made, and Mirna has been endorsed by the national Our Revolution organization, a group founded in the wake of Senator Bernie Sanders' 2016 presidential campaign that aims to elect progressives to office. Mirna was endorsed over her three opponents, and this marks one of the first times that Our Revolution has elected to endorse a minor party candidate for office.

More information about Mirna's campaign can be found at her website, mirnafor39.com.