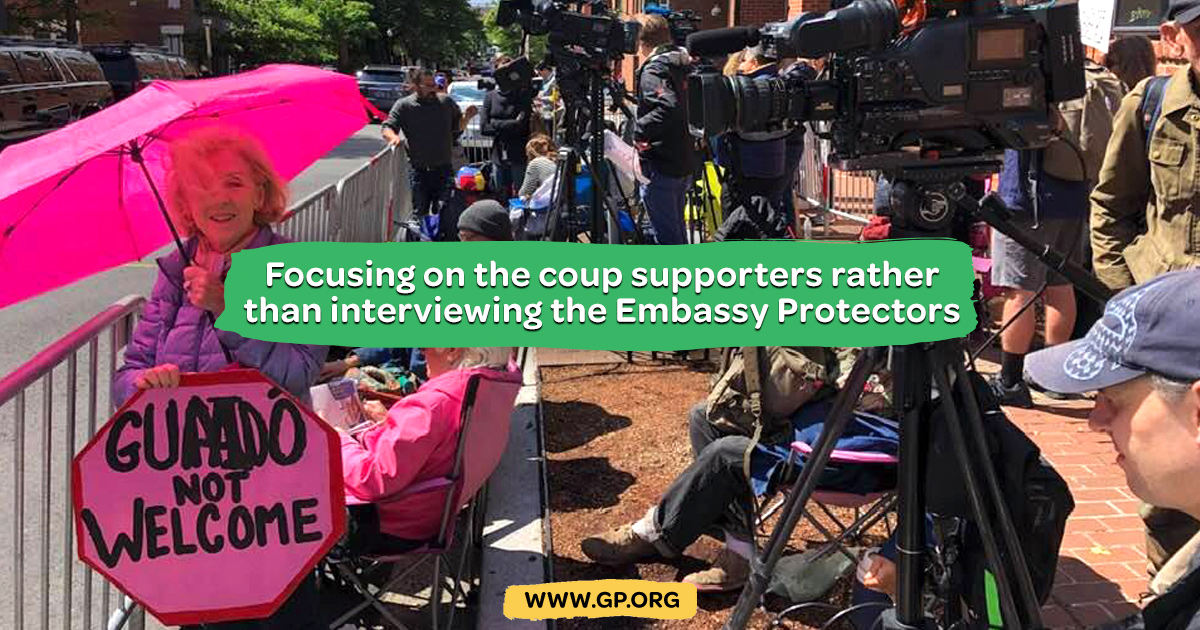 Right-wing and fascist thugs have laid siege to the Venezuelan Embassy. The electricity has been cut off. The water has been cut off and people attempting to bring food were violently attacked and arrested. The Secret Service and the D.C. Police Department, under orders of the Trump Administration, have created a humanitarian crisis in the heart of Washington D.C. at a diplomatic compound that is protected by the Vienna Convention.

Momentum is building all over the country in defense of the Embassy Protection Collective and in opposition to the Trump Administration’s lawless attempt to seize Venezuela’s Embassy.

Peace activists have been residing inside the Venezuelan Embassy, since mid-April to protect it from takeover by supporters of opposition leader Juan Guaido as part of the U.S. orchestrated coup. They are there as the invited guests of the owner of the building, the Venezuelan government. Organized by CODEPINK, Popular Resistance and ANSWER Coalition, they formed the Embassy Protection Collective. They are demanding that the electricity and water be turned back on, and that food and medicines be allowed inside.

Police backed off and left Kevin and Margaret and two others in the embassy. Apparently Margaret and Kevin convinced them that seizing the embassy in that fashion would be a huge violation of international law. Their lawyer said that the State Department had apparently not thought this through very well. The eviction notice passed around at the embassy did not look official, and no one knows who issued it or where it came from. So at least for the time being peace people are victorious. ~ Rita

The report and video are courtesy of Ann Wright. The video begins Brian Becker, followed by Mara Verheyden-Hilliard, the lawyer representing the Embassy Protection Collective as they're interviewed by reporters.

Incredible, after the police were in the foyer of the embassy for almost an hour they came out and locked the door behind them leaving our Embassy protection folks inside!!!!

It appears that the US government did not have an arrest warrant and they may be going to court tomorrow for that!