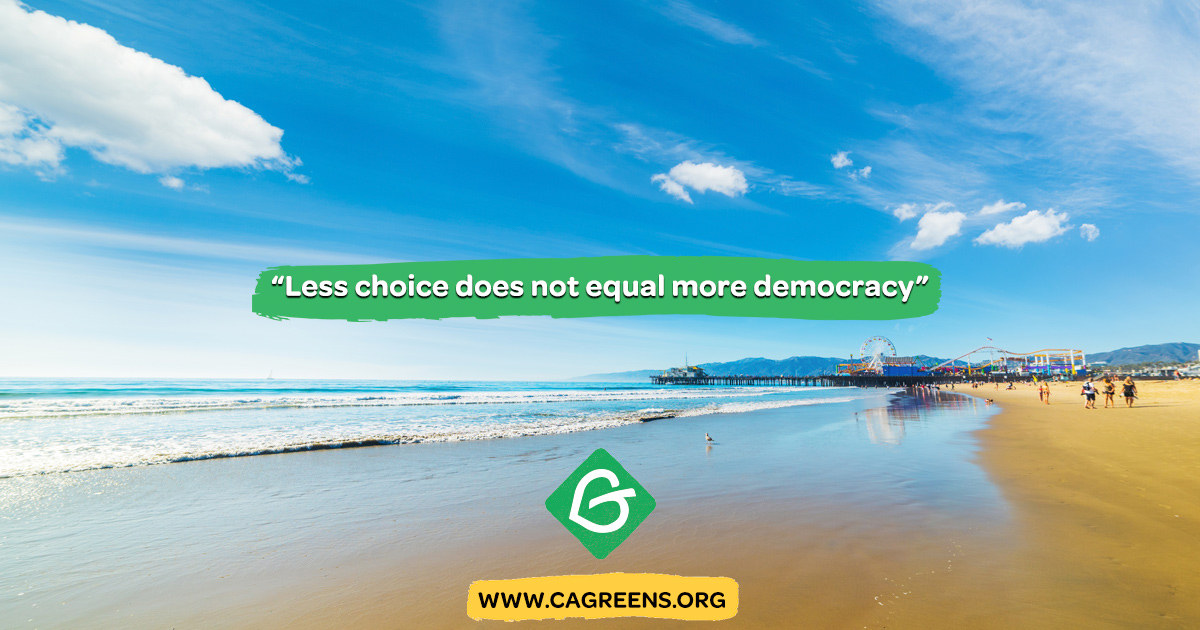 Cutting off your nose to spite your face isn’t good public policy.  Yet that is exactly what Measure TL would do to Santa Monica.

Ostensibly a response to calls for fuller representation, Measure TL would reduce voter choice by limiting whom we can vote for.  But less choice does not equal more democracy. Then why is it happening?

TL’s fundamental flaw is that it confuses breadth of representation with length. But it’s not how long any individual serves that determines better representation, its whether the system overall leads to a more representative result for the entire electorate.

By offering a ‘solution’ to the wrong problem, TL brings a sledge hammer to the tapestry of our representative democracy, when we need a sewing kit to weave the interconnected parts.

What it does mean is that many voters have chosen to vote for such candidates on multiple occasions.  Why should the right of these voters to vote for the candidate of their choice be taken away? Because this ‘necessary evil’ would somehow otherwise broaden voter representation?

Its actually easy to envision scenarios where by restricting voter choice, TL would lead to lesser, not greater representation in Santa Monica.

Imagine for example a scenario where a minority constituency is able to win one of seven city council seats because of the name recognition of their long-time preferred incumbent. But when that well-known person is prevented from running for re-election under TL , that constituency is no longer able to elect someone representing their views. That council seat then goes to the more powerful ‘other side’, which now wins representation in excess of its numbers, leading to lesser democracy.

Instead of designing a system with such inherent structural defects, why not concentrate on retaining voters’ right to vote for candidates of their choice – and giving more voters the opportunity to win representation in proportion to their numbers.

To achieve this, progressive cities across the country are adopting ranked-choice voting for local elections — instead of term limits.  By allowing voters to rank their choices in multi-seat elections, ranked choice voting provides a form of local elections by proportional representation, leading to results that more accurately reflect the broader diversity among voters, while retaining voters’ right to vote for whom they want.

Ranked-choice voting is already used for municipal elections in San Francisco and Alameda Counties in Northern California, and as well as in U.S. cities like Minneapolis and St. Paul (MN), Portland (ME), Telluride (CO), Takoma Park (MD), Cambridge (MA) and SantaFe (NM).  It is also used for Federal elections in the state of Maine, and has been used for decades for all levels of elections in Ireland and Australia.

Ranked-choice voting is where Santa Monica’s electoral reform attention belongs, combined with other progressive reforms like neighborhood-based candidate forums and expanded public financing of elections. Instead Measure TL would take us a step backwards.

Why I’m voting No on TL

The reduction and restriction of voter choice in Measure TL should be a canary in the coal mine that something is fundamentally wrong about TL’s clumsy, regressive approach.

Just because we are in an age of cynicism about politics and politicians, doesn’t mean we should take a two-by-four to the head of our democracy. Look what that did for us in the 2016 presidential elections.

Santa Monica can do much better.  That’s why I’m voting No on TL.

Michael Feinstein is former Santa Monica Mayor (2000-2002) and City Councilmember (1996-2004), a co-founder of the Green Party of California, a June 2018 California Secretary of State candidates.