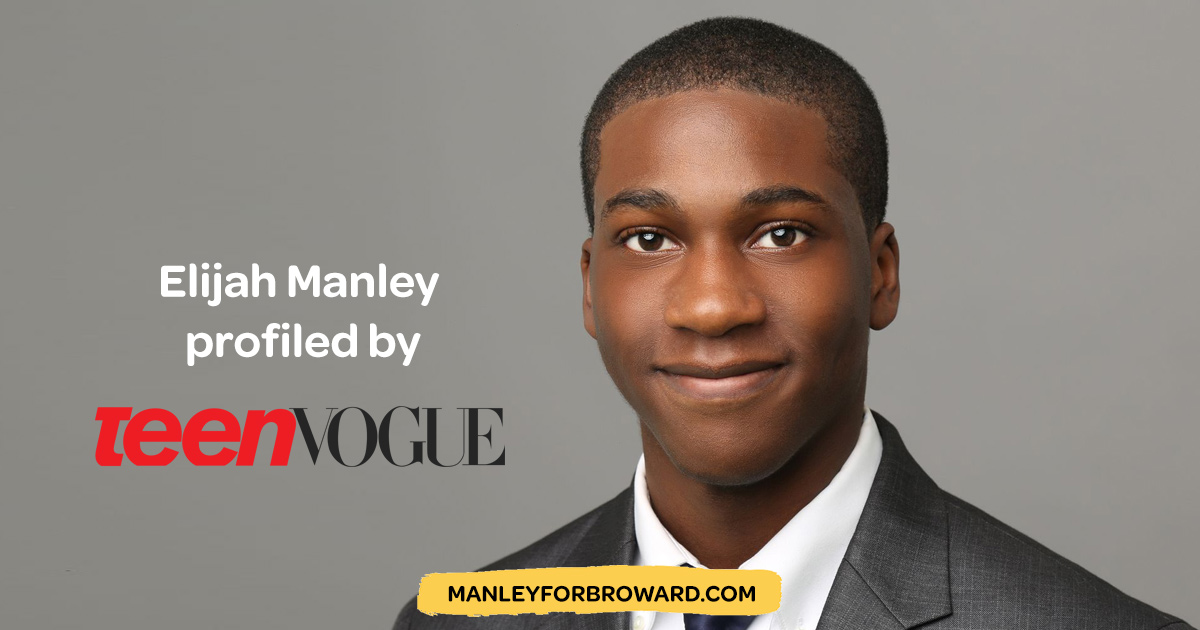 “Because I’m young and just graduated high school, no one is more qualified than me."

Activist and student Elijah Manley has lived in Broward County, Florida, his entire life, and he graduated from Fort Lauderdale High School in June 2017. He’s seen fellow students suffer from homelessness, food insecurity, gun violence, and sexual abuse — and he says he’s experienced all of that himself, too. The hardships, however, never deterred Elijah from fighting to survive or from fighting for others in his community. That’s exactly why he decided to run for a position on the school board in Broward County, the sixth-largest public school district in the country.

According to the South Florida Business Journal, Broward County is also one of the wealthiest counties in Florida. But Elijah says he has directly experienced the way that wealthy, majority-white communities have more resources and how a lack of resources can impact less-privileged students.

Elijah says he feels that not enough members of the school board have actively focused on the lack of resources that many young people from less-privileged communities suffer from — and for that reason, Elijah says the board needs a young person like him to help guide them, because young people experience first-hand the issues that affect them.

“Because I’m young and just graduated high school, no one is more qualified than me. I’m the most recent example of what public education can produce, and I definitely think we should have someone on the school board who reflects the issues,” he says. “We don’t need someone who hasn’t stepped on a school campus in decades. We’ve never had a person my age hold public office in this county.”

At just 14, Elijah joined the local Black Lives Matter Alliance and began devoting his time to activism and advocacy. Since then, he has interned for multiple political campaigns, organized with Black Lives Matter, and acted as a board member for the National Youth Rights Association— all before even starting college.

He says he's received pushback and experienced racism, as well as what he’s identified as extreme “ageism.” Despite that, Elijah hasn’t stepped down from participating and making his and other young people’s voices heard.

“Why should I have to wait to make my voice heard or make my ideas work?” Elijah asks.

He’s also a young black man who identifies as gay, and he says he has experienced homelessness and poverty first-hand. He’s watched peers experiencing similar hardships get left behind in a way he hasn’t been, he says.

According to 2014 data from the U.S. Census Bureau, the amount of people living in poverty in Broward is largely comprised of children (29%). Also in 2014, approximately one in five residents (22%) experiencing poverty or homelessness in the county was younger than 18 years old.

“You can’t expect kids to pay attention in school or succeed if they don’t have food, or a place to sleep, or how they can pay for health care,” Elijah says.

Research from the Alliance to End Hunger shows that poverty and unstable living conditions are major drivers of food insecurity, and that hunger is a racial equity issue, with negative circumstances disproportionately affecting communities of color. Data from organizations like Children’s Healthwatch show that food insecurity as well as unstable living situations reduce students’ chances of graduating from high school, while more recent research from The Atlantic also affirms that students who do have access to have adequate, healthy meals do better on tests.

Because of the hardships he and his peers have experienced, Elijah aims to always keep the most disadvantaged young people in mind. And hisplatform and policy stances reflect that. Besides his goals to provide resources like housing and year-round meals to students, Elijah is also running on the platform that the school board should be using its money to provide students health care, as he believes that housing and food are basic human rights.

His campaign is community-driven, which he says is a seed planted by his activist family in the Black Lives Matter movement. His friends in Black Lives Matter taught him not to compromise for political gain — and although Elijah understands that holding political office is different than being an organizer, and that compromise is sometimes necessary, he says he plans on holding himself accountable to people before special interests.

“There are going to be times when you have to make compromises. Some battles you’re not going to win, you have to compromise and come back,” he says.

“But some people get power and then they compromise all the time because they don’t know how to fight,” he continues. “Black Lives Matter taught me the opposite of that.”

In fact, he already has a history of holding the school board accountable. Even before launching his campaign, he consistently attended hearings, and set up meetings with administrators and board members to find solutions to the most pressing issues that students face.

If elected, Elijah says he would focus on trying to raise teachers’ salaries and changing Common Core curriculums to be less focused on standardized testing and more focused on what he considers to be true learning. He says he would also use his increased access to funds and influential board members to level the playing field for students from disadvantaged backgrounds.

Above all else, Elijah wants his campaign to send the message that more young people deserve to, and should, get involved in politics and in determining how their schools are run.

He wants his fellow young people to know that you don’t have to be superhuman to make a difference, that it’s just about “making the effort, thinking you can do it, and trying,” he says. He also doesn’t believe that coming from a disadvantaged background has to mean taking a backseat in politics — or life.

“I want people to know that doesn’t define you, you define you,” he says.

Elijah Manley a member of the Green Party of Florida.