It may be the first time Green Party candidate Michael Oretade is running for public office in Hartford, but the activist is no stranger to the public 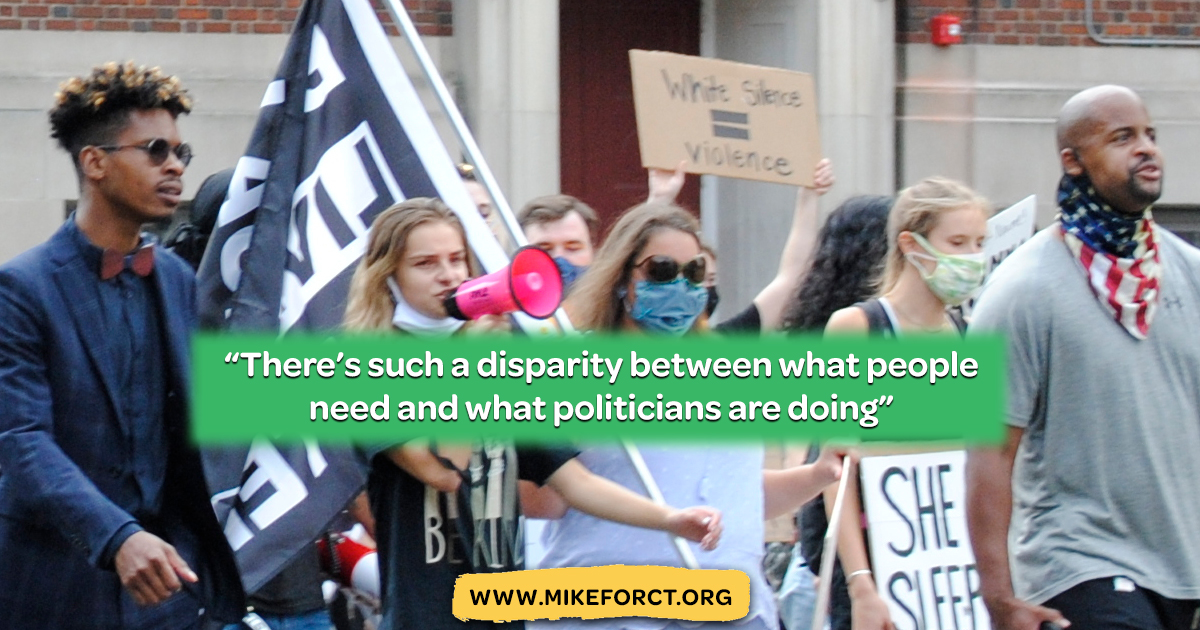 Hartford resident Michael Oretade calls himself an urban renaissance man. Among the titles the 29-year-old Oretade can claim are activist, teacher, student, hip-hop artist, the former owner of a record label and comic book writer.

And, as of this past spring, he added one more to the list: candidate.

Oretade is running for the 1st Senate District seat, which includes parts of Hartford and Wethersfield, as the Green Party-endorsed candidate in the November election.

He will face longtime Democratic incumbent John Fonfara. Alex Colaiacovo and Mark Greenstein are listed on the secretary of the state’s candidate registration list as potential Republican challengers.

It’s the first time Oretade is seeking public office, but he’s no stranger to the public, at least in Connecticut. Until recently he was the president of BLM860, an activist group that was organized in the summer of 2020 in response to the murder of George Floyd in Minneapolis.

“There’s such a disparity between what people need and what politicians are doing,” he says, noting the need for the deploying of mental health services instead of the police for 911 calls, like Denver is doing with the STAR program. “There [are] so many issues we’re not paying attention to.”

He says more funding is needed for education and support programs, particularly for Black and brown children in disenfranchised communities.

“We’ve got a lot of complaints about how there was a lot of youth-based crime,” he says, “and the immediate measure they wanted to take was locking up the children instead of investing in the redevelopment of our recreation centers and investment in after-school programs and funding nonprofits and give children and young adults jobs and job-training skills to get jobs.”

Oretade, a substitute teacher in the Manchester public school system who was born and raised in Hartford, says he was the beneficiary of a job-training program that paid him $7.25 an hour to learn how to create a resume and how to conduct himself in job interviews.

“It really changed my life,” he says. “I could have been out on the streets and doing whatever.”

He also has big plans for recovery homes and child care, where he sees solutions either through a public program or public funding of private facilities.

“Imagine if we [raise] the taxes 1% and you don’t have to pay for child care anymore,” he says. “That means everyone gets to share the bill for your child care, whether on a municipal level or just through the state. But it’s something we’re absolutely capable of doing, but for whatever reason, we’re just not.”

He says he is 23 credits shy of graduating from Rasmussen University in Ocala, Florida. He says he intends to get his teacher certification after graduation.

“I’ve dedicated my life to educating the next generations that are coming up after us,” he says. “It’s in my job description to make a better world and a better place for the people who come after us.”

An activist at heart

Oretade, a 2010 graduate of Prince Tech, has come a long way since he grabbed a megaphone while under the Bushnell Park carousel canopy during the first rally after George Floyd was murdered by a police officer in May 2020.

“It was a wake-up call for me,” he says of Floyd’s killing. “I always wanted to get into activism dating back to Trayvon Martin.”

But, he said, he was like many members of the Black and brown community who felt like they were powerless to effect change.

“We’d ask politicians to change things, and they don’t care about us,” he says. “That’s how I lived my life, too. … When George Floyd was murdered … whatever it was it spoke to me and said, ‘You have to get out there.’ A lot of people felt the same way. We were surrounded by thousands of people.”

Oretade and his brother took refuge under the carousel canopy for shade because it was hot.

“We were standing with the organizers, who were white, and they were saying, ‘We can’t possibly lead this.’ I said, ‘Hey, we can.’

“I grabbed the microphone. It just happened, we gave a speech on the Capitol steps. From then we formed BLM860.”

The group had 14,000 members on Facebook before it was shut down, he says.

“It was a massive activist group. Whenever we said there would be a protest, 500 people would show.”

Oretade stepped down from his leadership position on BLM860 to run for office and focus on his campaign. Still, he says he is a part of BLM860 and will speak in support of their issues.

“I didn’t want my campaign to conflate any issues that BLM wanted to take on,” he says.

Oretade acknowledges he has a difficult path to victory as he faces Fonfara, who has held the seat since 1996 and has garnered at least 71% of the vote in each of his biennial elections, according to the secretary of the state’s website.

But Fonfara is also a major reason why Oretade says he is running.

In April 2018, Fonfara told lobbyist Arvia Walker, who was wearing a “Stand with Black Women” button, “I need a ‘Stand with White Men’ button.”

Walker said, after a brief exchange, that Fonfara doubled down and challenged her to walk a day in his shoes. Fonfara later apologized for his comments publicly and privately to Walker.

Still, Oretade says, given that incident, Fonfara “has no right to represent my community.”

“I can’t imagine someone who supposedly lives in my neighborhood as well as representing my neighborhood could completely disregard the feelings of Black women that live in his district,” he says.

Oretade says Fonfara is out of touch with the people he represents.

Gary Rose, a political science professor at the University of Hartford, underscored the long odds Oretade has in unseating Fonfara, given that Oretade is not a candidate from one of the two major parties.

“We’ve had some minor party candidates, we’ve had some third party candidates win in the past,” Rose says, noting that Bridgeport had a socialist mayor, and Lowell Weicker won his race for governor as a member of the A Connecticut Party in the early 1990s. “But he was a high-profile Republican, a three-term senator.

“When you hear about a Green, most people aren’t really sure what the party is all about. Some think right away environmentally, that’s what Green stands for. But on the other hand, other parties are seizing that issue, so that’s kind of diminished the appeal of the Green Party.”

Still, Rose says there is value in having third parties run candidates in elections.

“They serve a purpose because they do at least provide some voters who are alienated from the two major parties at least a political home,” Rose says. “To me, that’s important. Some people feel that even though their candidates aren’t going to win the election … if somebody does vote for a third-party candidate, at least they can feel they were at least part of the democratic electoral process, despite the fact their candidate didn’t have a chance. It gives them at least a sense of input and a voice.”

That’s not how Oretade sees it. He says he has a group of about 10 volunteers who are preparing to start fanning out and canvassing neighborhoods. He says he’s also raised about $5,000 of the $17,000 in small donations needed to qualify for the Citizens’ Election Program.

He doesn’t have to worry about appearing on the ballot because the Green Party candidate Mary Sanders garnered more than 1% of the vote — the threshold for a party to carry over to the next election under Connecticut law — in the last 1st Senate District election in 2020.

He says losing is not an option.

“I’m going to do everything I can to win this. I can’t imagine losing this election,” he says. “I can’t even picture it. As soon as the people see me, understand what I’m about, there’s no way in hell that they will choose a 20-year incumbent over [me].”

And he has big plans for the future.

“One day I want to run for president,” he says. “If I can make history by winning this race and changing the way that people view this democratic system and voting for the person and not the party, once I make history, it’s a straight shot to the White House. I want to run for the U.S. Senate one day and eventually vice president and then president. That’s the biggest goal.”