Montana Green Party will be on 2022 ballot, judge orders 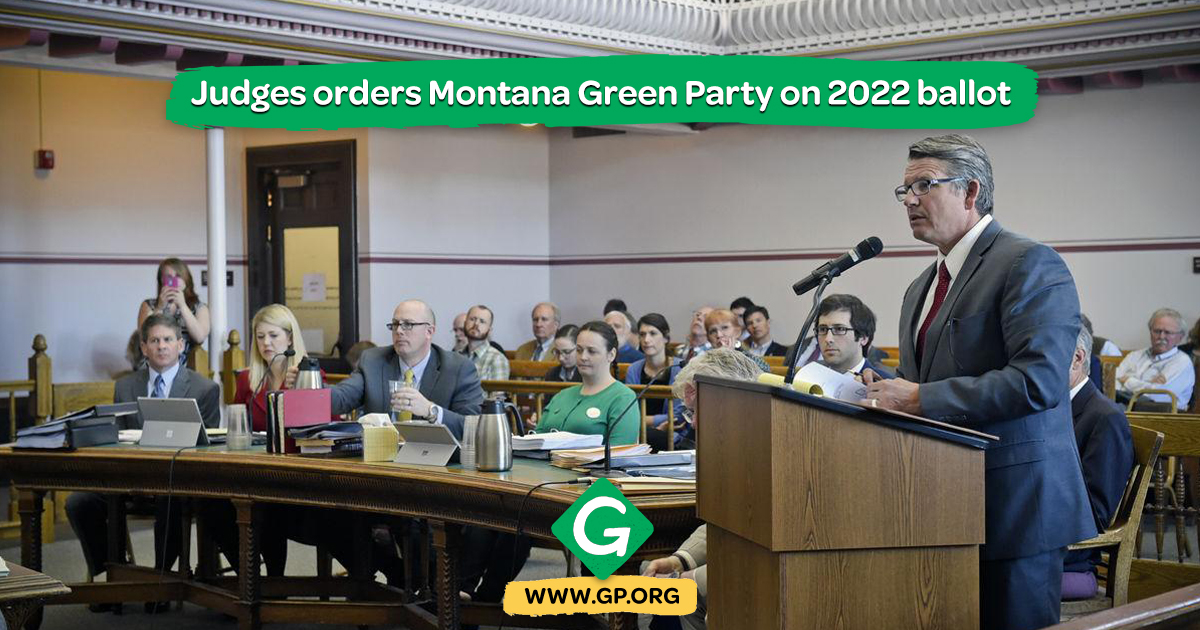 Quentin Rhoades, an attorney for the Montana Green Party, argues in a 2018 court hearing in Helena over whether the party's candidates should remain on the ballot. Photo by Thom Bridge

A federal judge in Helena has ruled that the Green Party will be on Montana ballots in 2022, following an appeals court ruling in November that nixed a portion of the state’s law setting out qualifications for minor parties.

In his ruling Wednesday, U.S. District Court Judge Brian Morris also ordered Secretary of State Christi Jacobsen, the defendant in the case, to pay just shy of $70,000 in attorney’s fees to the plaintiffs, which included the Green Party and several individuals associated with it.

The decision caps off a years-long battle in state and federal courts over ballot access for the Green Party, including revelations that Montana Republicans had bankrolled the effort to get the Greens on the ballot in 2020. The environmentally focused, left-leaning party is often considered a potential “spoiler” for Democratic candidates in close races, siphoning more votes from those politicians than Republican ones.

Libertarians, who fill the same role for GOP races, have maintained enough votes for candidates in past cycles to remain qualified for the ballot.

“The successful state court actions by the Democratic Party in the 2016 and 2020 cycles effectively destroyed the Green Party as an organization,” Quentin Rhoades, the party's lead attorney in the federal case, wrote in an email Thursday. “Their constituents had become scattered, divided, leaderless. The federal court result will give Green Party leaders time and an opportunity to put their organization back together for 2024.”

No Green Party candidates registered for either of Montana’s U.S. House races by the March 14 filing deadline this year, but two candidates are competing in state legislative races. Morris's order doesn't appear to offer any avenue for additional candidates from the party to register now that the deadline has passed.

Richie Melby, spokesperson for the secretary of state, said in an email Thursday that both candidates will appear on the 2022 general election ballot without first needing to gather signatures.

The party had apparently not been working to qualify for the 2022 ballot by gathering signatures. Melby stated in a March 7 email that the Secretary of State had not received any qualification petitions from county election administrators, who are required to review the signatures to determine their authenticity.

One of the two Green Party legislative candidates is longtime environmental activist Steve Kelly, who was also one of the plaintiffs in the federal case. Kelly is running in House District 61, which stretches west from Bozeman. In 2018, the last time the district saw a contested general election, the Democratic candidate won against the Republican by a 3-to-1 margin.

Kelly said the court decision gives a voice to left-of-center voters who he feels aren't represented by either major party.

"There’s more people that don’t vote than the winner of any election gets, and then they call that democracy," Kelly said. "I think we can improve on that, and one of the ways to do that is to have more parties and more options at the polls."

The other Green candidate, Gary Marbut, is a long-time conservative activist who heads the Montana Shooting Sports Association. He filed as a Green candidate in House District 90, in south Missoula. The district was won handily by Democratic Rep. Marilyn Marler, who beat the Republican candidate by a 36-point margin in 2020.

Marbut, who between 2000 and 2014 campaigned three times for state legislative seats as a Republican and once as an independent, most recently sought office as a Green candidate for state Senate in 2020 until the party was removed from that year’s ballot by a state district judge. That ruling was upheld by the Montana Supreme Court.

In an interview Friday, Marbut said his intent isn't to pull votes away from the Democratic candidate in his race to benefit the Republican.

"I think the Green Party is what its people make it," Marbut said, adding, "Those of us who are participants in the Green Party have some opportunity to establish whatever its persona is."

The federal case before Morris has been plodding along since 2018, when the Montana Green Party challenged the state’s rules for getting a minor party on the ballot. It required parties to gather signatures equal to at least 5% of the total votes cast for the winner of the most recent gubernatorial election in at least 34 of the state’s 100 House districts.

Judge Morris initially sided with Corey Stapleton, the Secretary of State at the time, ruling in 2020 that the requirements didn’t create an undue burden for minor parties and didn’t violate their equal-protection rights under the 14th Amendment.

But last November a three-judge panel on the Ninth U.S. Circuit Court of Appeals reversed Morris’s ruling, finding Montana’s 5%-of-each-district rule violated the federal principle of one person, one vote. The court’s ruling noted that basing signature requirements on prior election vote totals resulted in substantial variations in the number required in different districts around the state.

Morris determined that the rest of the statute can remain on the books, including the overall requirement that minor parties gather at least 5,000 signatures or 5% of the total number of votes from the last gubernatorial — whichever is less.