#StandingWithStandingRock: Q&A with Green Activist, Diane Moxley, about Her Time in North Dakota 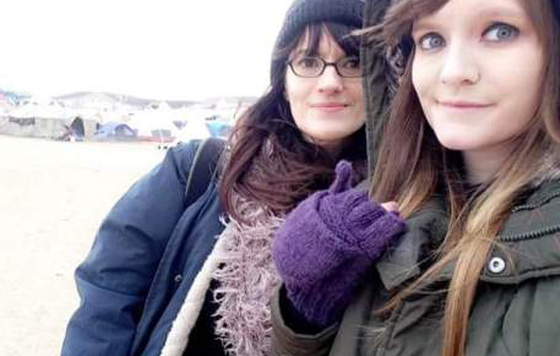 TNS: Which organisations have you worked with or have been a part of?

TNS: What type of work you do to pay your bills?

DM: I am a Legal Services attorney in Newark, NJ.

TNS: Does what you do for a living inform your activism or politics at all?

DM: Yes, it informs my activism in that I see the struggles of the low income inner xity communitues on a day to day basis. I see the effects of racism and oppression & economic injustice.

TNS: What motiviated your trip to Standing Rock?

DM: Over the past few years I have become more aware of the dramatic free-fall toward climate chaos and the dangers of oil and gas pipelines that are sprouting up all over the place, and became active locally with the Coalition Against the Pilgrim Pipeline. A few months ago I started to hear about the brutal police actions against the peaceful water protectors who were trying to stop the construction of the Dakota Access Pipeline. I found it unbelievable that after so many years of our country's mistreatment of Native Americans we continue to trounce on the rights of our Native American sisters and brothers. Then when I heard the leaders at Standing Rock put out a call to action I felt compelled to go and stand in solidarity.

TNS: I remember seeing the emails and facebook messages abour you fundraising to go. How much did you raise and what were the things you needed to purchase? This info might be of interest to other activists thinking of going or whom are about to go.

DM: I raised about $1,000 that was used to purchase a tent that can withstand wind and snow; a propane heater; thermal pads for under sleeping bags, and other incidentals. It was also used for gas and tolls to transport myself, daughter, and a second driver.

TNS: I didnt realise your daughter went with you. I know she's of age but did you have reservations about her showing solidarity in this manner?

DM: She was raised with activism. She has participated and had training in non violent direct action. I am conflicted at the moment after what we experienced at the prayerful action in the Bismarck mall, but change will not occur if we back-down now in fear. My daughter is an adult, I pray for her safety, and the safety of all of the water protectors, but I can't stop her from following her conscience.

TNS: What happened during the prayerful action in the Bismark mall?

DM: We went to the Kirkwood Mall in Bismarck, ND to participate in a prayerful action to pray for our water and for peace. We were just getting to the area where a prayer circle was formed and it was immediately shut down, the police went from zero to 60 in a second, violently throwing water protectors down on the ground to arrest them with no warnings. Police were in riot gear, many with their faces covered to hide their identities. Even as the crowd began to disperse and move toward exits they were still grabbing water protectors, and continuing to throw them face first to the ground.

Native Americans were targeted in particular, but people were also pulled at random. This action did not block stores or exits, it was to be completely nonviolent. This was deliberately set to be a brief, peaceful prayer ceremony to bring awareness of the Dakota Access Pipeline struggle.

In this link you can see my daughter is grabbed and thrown to the ground with no advance warning. She was obeying police orders and backing up as asked. She was livestreaming the arrests and appeared to be target by being identified as a water protector and for livestreaming. This action was on the Friday after Thanksgiving, Black Friday.

TNS: Prior to this happening what was the mood like and if you could please contrast that with how it was after the police assaulted protesters?

DM: No time to measure a mood, water protectors were just heading to the area to assemble in peaceful prayer. I think many were concerned that there was a large police presence as soon as we entered the mall. Police were all throughout the mall some in riot gear with rifles, and some masked. It was intimidating but being we were going to simply engage in peaceful prayer I doubt anyone expected what happened to happen.

TNS: How would you describe your overall experience at Standing Rock?

DM: The community at Oceti Sakowin Camp is wonderful, anyone who can get there should try to go. People are encouraged to participate in ceremonies, attend meetings and trainings, help out in the kitchens, or with building, donation sorting, etc. The police brutality was horrific, and shocking considering that everything I saw was 100% non-violent, and I was there for just over one week.

TNS: What did you bring back with you from Standing Rock, menatlly, emotionally, spiritually, and/or socially?

DM: I brought back a wonderful connection with the human spirit, a desire to never quit and never give up our fight for justice and the greater good. I see that I am just one small part of a stronger and powerful whole that is capable of amazing things. Many have discussed at the camp that even if we technically fail, meaning that the pipeline is built, we have won in that we have formed these incredible bonds and connections that we now take home to our communities to effect change. We will be unstoppable!

TNS: Now that your back home in New Jersey, how will you continue tour solidarity with the water protectors? What can or will you do from afar?

DM: We were all encouraged to bring back what we learned to our communities. I will seek to further educate myself and others on the struggles of indigenous peooles and will work locally on environmental issues such as stopping the Pilgrim Pipeline.

TNS: Thank you for your time, Diane.

DM: Thank you for considering our story for an article!

[ If any of our readers would like to make donations to Ocetiskawin water protectors you could do so at waterprotectorlegal.org and ocetisakowincamp.org.]