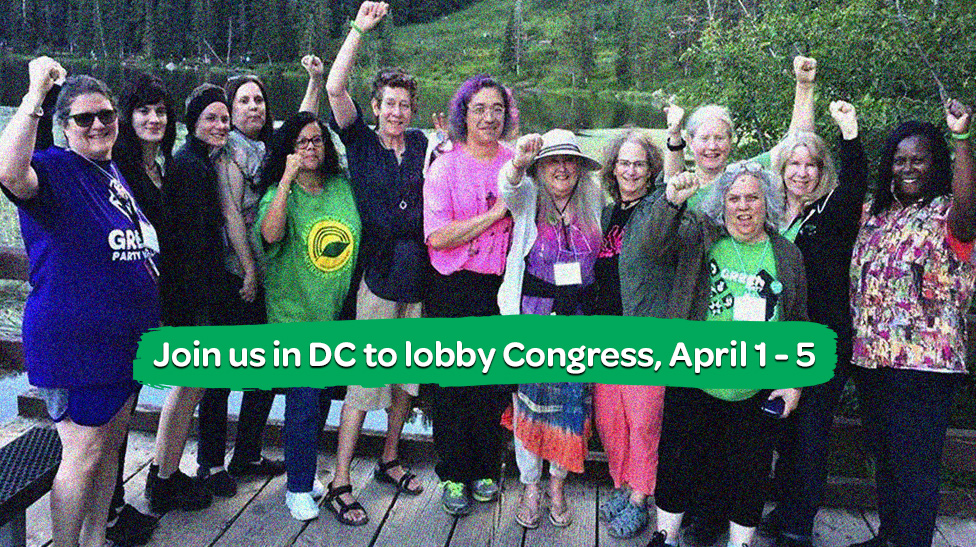 Greens from all over the United States will join together in Washington, D.C. April 1-5, 2019 to lobby their congresspeople by asking them to take the the "Public Funding Only Pledge". Additionally, they will be asked to sponsor or co-sponsor a bill in Congress to free our elections from any sort of bribery cash: special interest PAC, corporate or dark money donations. Instead, qualified candidates from every party would get an equal chance in TV, radio and printed ads, debates and appearances. This would allow other voices to be heard and the American voters to be aware of all of their choices.

The lobby starts on April 1st (Monday) and runs until the 5th (Friday). It will be in the halls of Congress. Information and downloads available at: www.greensvsgreed.org.

We also have an orientation meeting for those who can make it on March 31st at The Tabard Inn.- M 1739 N Street NW starts at 6 PM till 7 or so. It will be in the lobby before the restaurant.

We'll be meeting on the steps of the Supreme Court on Wednesday April 3rd at 3 PM for a group photograph. We will be holding a press conference at the same time..

That evening there's an event at Bus Boys and Poets, 450 K that all lobbyists and the general public are invited to attend.

It is called "How Public Funding of Elections Saves taxpayers $$$'". The speakers are guaranteed to be stimulating and more on that soon.

We also have been invited by Lee Camp to Redacted Tonight on the Thursday the 4th. If you are going and have not already gotten tickets for this yet, let me know and I will link you.