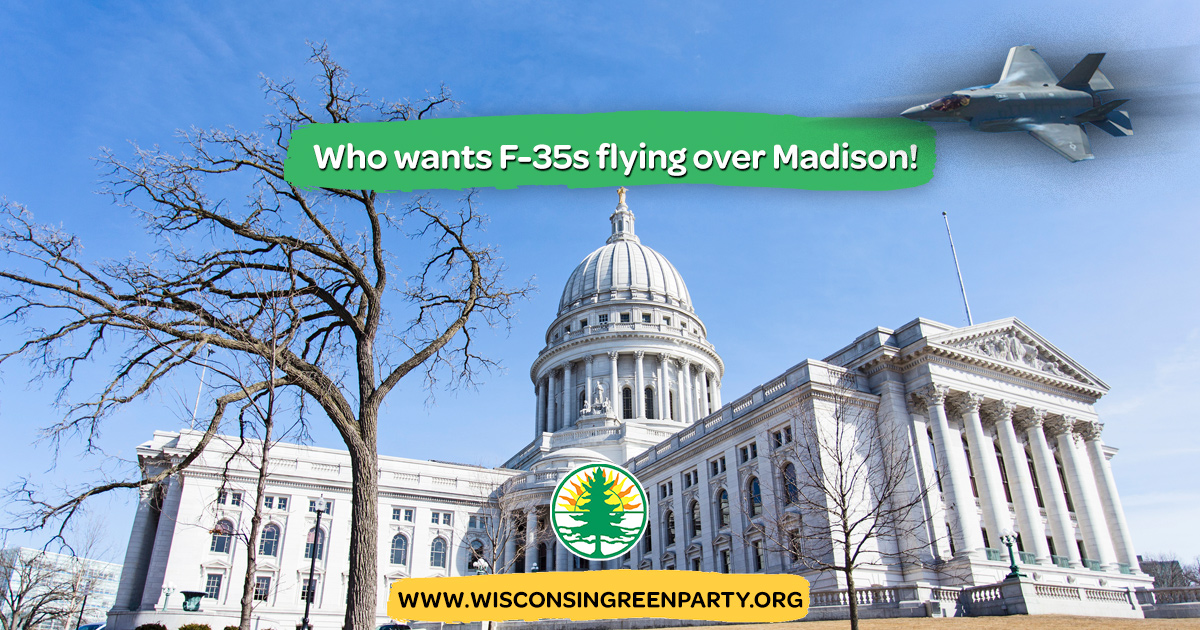 MADISON, Wi – The Wisconsin Green Party stands in opposition to the proposed addition of 18 F-35 multirole combat aircraft to Truax Field in Madison. The proposed F-35 expansion at Truax field would have major negative impacts on public health, quality of life and the environment in our state capital.

We urge everyone in Wisconsin who cares about our future to voice their opposition to this project now.

Submit a public comment now to say no to F-35s in Madison before the deadline Friday!

Bringing F-35s to Madison would mean increased use of cancer-causing PFAS “forever chemicals”, worsening the water pollution problem that has already caused Madison to shut down Well 15. The Air Force has not provided funds to study or clean up these pollutants, and appears to have no plans to do so.

Locally, a recent Madison report points to the negative impact of noise and pollutants of the proposed squadron of 18 F-35 jets to be stationed at the base, primarily affecting minorities, low-income neighborhoods, and children on the east side of the city. Recent public testimony on the expansion given by 13-year-old Gio Alcantara revealed the fact that the currently housed jets are waking up school children in the middle of the night.

The proposed F-35 expansion is a textbook case of how the military-industrial complex takes massive amounts of money from American taxpayers for little in return. Wisconsin taxpayers already pay over $200 million per year for the notoriously wasteful F-35 project, which if brought to Madison would increase the tax base by less than $2 million per year.

1,450 households and over 3,000 people live in areas that the Environmental Impact Statement deems “potentially incompatible with residential use”, yet they have not been given clear answers on what will happen to their homes. It seems almost certain that state and local taxpayers will have to pay dearly to deal with the noise, air and water pollution if F-35s come to Madison.

It is both law and sound practice to ensure residential zones have multiple protections in place to ensure safety and quality of life for all residents, regardless of ethnicity, disability, or income level. The proposed addition of F-35 jets to Madison’s Truax field would significantly increase noise and pollution and reduce quality of life in a residential area where people have the right to health, safety, education, a clean environment, and a restful night’s sleep undisturbed by dangerous noise levels.

For all these reasons and more, we urge everyone in Wisconsin to oppose the F-35 expansion by submitting public comments on the Air National Guard’s Environmental Impact Statement by the September 25th deadline, and raising your voice to demand our elected representatives put people, planet and peace over Lockheed Martin’s profits.

Submit a public comment now to say no to F-35s in Madison before the deadline Friday!

After submitting your comment, please call US Senators Tammy Baldwin and Ron Johnson, your congressional representative, and your state and local representatives to ask them to oppose F-35s in Madison!

Find and contact other representatives using the My Elected Officials tool on MyVote.wi.

Thank you for taking action for the greater good!

P.S. – The Green Party is a people-powered party that refuses to take money from corporations, lobbyists or super PACs. We rely entirely on people like you for support. Please consider making a contribution to support our work - thank you!