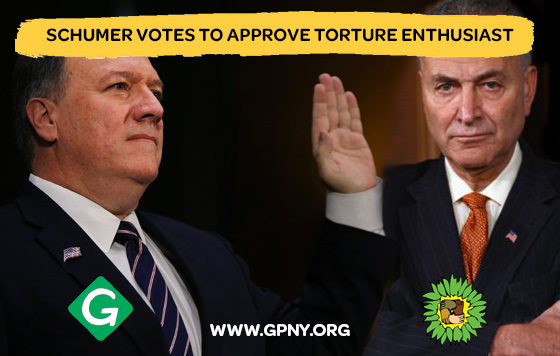 Albany – The Green Party of New York denounced Senator Schumer's Monday evening vote in favor of Mike Pompeo as CIA Director. Citing Pompeo's own statements that CIA officials who engaged in torture were "patriots" and that he would be open to altering a 2015 law prohibiting the government from using interrogation techniques not listed in the Army Field Manual, his portrayal of the "War on Terror" as a religious conflict between Muslims and Christians, claims that Islamic leaders are potentially complicit in terror because they don't speak against it, and appearances on anti-Muslim radio programs – Green officers questioned why New York's senior senator would vote to confirm Mr. Pompeo.

Agreeing with Sen. Ron Wyden, who called Pompeo "the wrong man for the job," the party said Schumer owed New Yorkers an explanation why he chose to cast a vote for Pompeo. Green officers also said it was clear the Democratic leadership was playing political games rather than offering a fierce resistance to Trump's regime, and that real resistance would require a new party and new organizations willing to struggle.

"As Senate Minority Leader, Senator Schumer is the highest ranking Democrat in Washington, DC, from a party that claims to be leading the resistance to the Trump regime. Why would Sen. Schumer not demand a principled party-line vote on this candidate, who is clearly a radical reactionary? While the 46 Democrats in the Senate could not stop the nomination due to the rules change by Democrats to abandon the filibuster for nominees three years ago, a strict party-line vote would have sent a message that Mike Pompeo did not have bi-partisan support and that there would be a resistance to Trump's nominees.

"Much has been made of Schumer being the only defense against the Trump regime. A principled minority leader's role is to set an example for his party members and to lobby Democratic-caucusing independents to vote with them and even go after a few Republican votes to scuttle the nomination. Instead, Sen. Schumer and 14 other members of his caucus voted for a torture-supporter, and two Democrats from Connecticut were allowed to not cast votes at all. A sad portent for a Democratic 'resistance' to Trump," said party co-chair Peter LaVenia.

"Trump's cabinet choices are ultra-conservatives and militarists who favor, like the president, policies that will enrich the 1% over working Americans – his rhetoric notwithstanding. Millions of people marched last weekend in opposition to the incoming regime, and yet the Democratic Party begins Trump's term by making concessions. These political betrayals and maneuvers will have an immediate impact in the United States and around the globe. The Green Party vociferously opposes sell-outs like Senator Schumer and the Democratic Party. We will work to build a strong, principled opposition to Trump, the Republican and Democratic parties," concluded party co-chair Gloria Mattera.