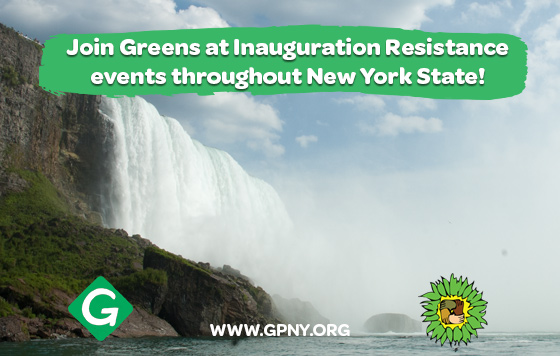 THE PEOPLE UNITED WILL NEVER BE DEFEATED! Inauguration day is upon us, and Trump will soon be in office as the 45th President of The United States. The Green Party will be joining Inauguration protests and events in Washington DC, and around the country.

The Green Party is standing in solidarity with the American people to let them know we will be watchdogs against the current regime.

As an independent electoral party connected to social movements, we know that neither corporate party candidate works for the good of the 99% of us.

So The Green Party wants to send a message that we are here to help with the resistance and we will be here to help the American people reclaim power, and protect our communities from Trump's regime.

If you would like to join your fellow Greens in the resistance against Trump, and are unable to go to Washington, there are events going on throughout the state of New York that the Green Party will be hosting, or participating in.

Check out these great Inauguration events going on throughout New York State and RSVP for one today.

If you are unable to attend an event during Inauguration weekend, or would like to see what Dr. Jill Stein, The Green Party, and social movement leaders from around the country will be doing in Washington you can join Dr. Jill Stein on the Green News Network. The Green News Network will be livestreaming Inaugurate The Resistance on Facebook on Saturday January 21st from 10am-5pm.

Please help us spread the word about these great events going on throughout Inauguration weekend by sharing them on Facebook and Twitter.

We hope you will join The Green Party as we stand in solidarity with the American people, and our communities for a day of solidarity and resistance.

In solidarity,
The Green Party Of New York
http://www.gpny.org/