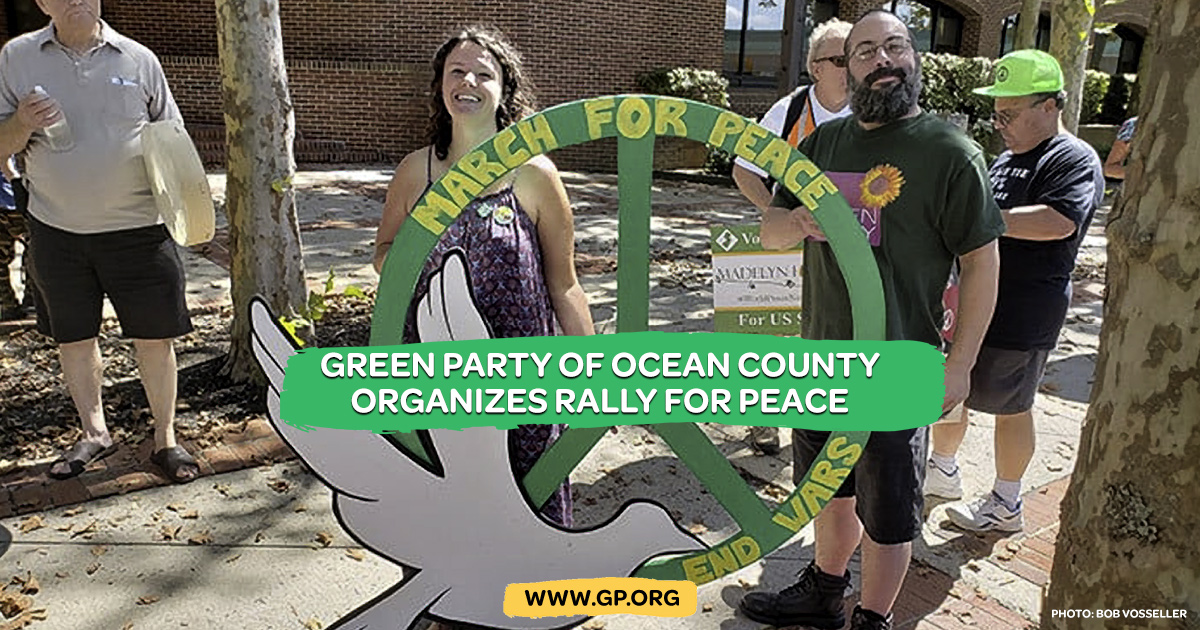 TOMS RIVER, NJ – All they were saying was give peace a chance. More than 50 people came out to chant, sing, and discuss the need and benefits of ending all wars to make the world a better place during a rally held in front of the Toms River Township Municipal building on Washington Street.

The rally, which included music, numerous signs, posters and banners and a march around the sidewalk of the downtown area, was hosted by the Green Party of Ocean County. The rally was co-hosted and included speakers from Our Revolution Ocean County, Green Party of Monmouth County, Industrial Union Council, Central Jersey Coalition Against Endless War, Coalition for Peace Action, New Jersey Revolution Radio, Help Not Handcuffs and several other organizations.

Speakers proclaimed the environmental, racial equality, health and economic benefits of a peaceful world and were not shy in expressing their discontent with the political establishment of both Republican and Democratic officials. Speakers were critical of the motivation and agenda of conservatives and liberals and called for support of an independent voice by candidates of their own party.

Ocean County Green Party member Jessica Clayton of Brick was the primary organizer of the event and she said she invited political officials and candidates from both parties to attend the day's rally. "I got a couple outright 'No, we cannot attends,' but most of them just ignored me. I really wanted (Democratic Congressional candidate) Andy Kim to come but he declined." Kim is running against Republican 3rd congressional district incumbent Thomas McArthur who has an office based in the township municipal building. McArthur did not attend the rally either.

"I hope it is not because they didn't believe in peace," Clayton said. She added the thrust of the afternoon's rally was that it was time to take a stand against war which she said proved a catalyst to many of the country's domestic problems including its immigration policy. Clayton previously attended a township rally that denounced the president's policy to separate immigrants who were found to have entered the country illegally, from their children. This inspired her to hold this rally.

"We are protesting war because it impacts our foreign policy and it later becomes a domestic issue. Healthcare is one of the things it has impacted," Clayton said adding that funding that could be used to fund health care was instead being used for military purposes. She said she is an advocate for universal healthcare and that she and her party want to see a stronger focus toward that along with social justice, environmental concerns and anti-racism.

"Our core group is about 12 people but we have 140 people on our mailing list and we've started to become more active," Clayton said regarding the county's Green Party.

Gavin Milko came prepared for the event. He created a special large peace sign that was held up during the march around the block. The township resident said he has a business called Passion Peaces based in Toms River that involves peace emblems. "It is a symbol to bring us all together. It bridges the gap of race, religion and politics. I've been putting out peace signs in different places and wandering eyes are seeing it and it is an expression of 'your peace will come again.' It took me three hours to make it and the dove was painted by a friend of mine."

Waretown resident Roseanne DePasquale is no stranger to township based rallies. She attended one a few weeks ago that opposed the confirmation of President Trump's Supreme Court Justice nominee Brett Kavanaugh at the same location. She is a member of the Solidarity Singers who performed at the peace rally. "It is my birthday today but there is no place I'd rather be than here," she said.

DePasquale and her fellow Solidarity Singers performed several times during the afternoon breaking up the speech time and providing an air of 1960s style protest songs with lyrics noting the need to protect the planet and to end violence. One song remarked "soon we will dump Donald Trump."

Joe Carrino, Toms River, joined Clayton in holding Milko's hand-made peace sign as the march started off the rally. "We are proud to have two Green Party members here today to speak and who are running for US Senate, Diane Moxley and Madelyn Hoffman. Carrino said it was important for voters to know that there was an alternative to Republicans and Democrats running for public office.

Paula Rogovin of the Teaneck Peace Vigil and Military Families Speak Out group has held a peace rally every Wednesday in her community for the last 13 years. She said there was too much spending for purposes of war to the detriment of other areas such as education, the environment and health issues.

Rogovin noted that her strong stance for peace had caused her family strife. "My own son doesn't want a mother who is an anti-war activist. We have not spoken in three years."

Hoffman said she was previously the director of a non-partisan peace movement but now she is running against long time incumbent Democrat Bob Menendez and Republican challenger Bob Hugin for US. Senate. She criticized former presidential contender Hillary Clinton who will be attending a fundraiser in support of Menendez in north Jersey next month that has attendees paying between $5,400 and $250 a plate.

"We have a two party system that is dedicated to war," Carol Gay of the Industrial Union County and Universal Health Care Coalition said.

Geoff Ginter of Real Progressive said, "you have to get loud and in their face. We are our own worst enemy but we are the solution. Don't look to our elected officials to do this. They won't."

Junior Romero, a member of Food & Water Watch, said that war causes environmental issues. "War causes large use of oil and gas which produce methane gas which is something that affects climate change."

Brian Powers of NJ Revolution Radio joined members of his family to provide some music early in the event. He was also the first speaker of the day. "I was a Democrat, too, but I got better. We have to call out the liberals and conservatives. They are the establishment. Refuse to let the establishment be louder than us."