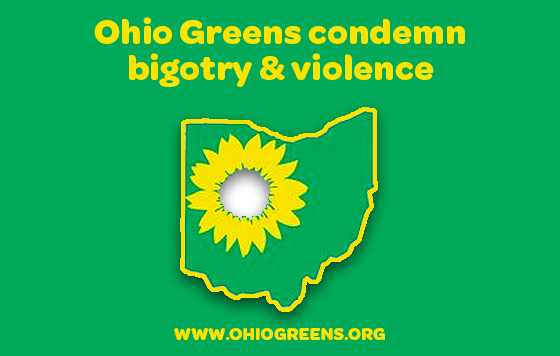 Cleveland OH – The Green Party of Ohio is aware of the increase in acts of violence and intimidation against members of minority communities that have occurred in the wake of Presidential election.

We are calling for Party leaders, particularly those of the Ohio Republican Party, to immediately condemn these instances and for members law enforcement, whether Republican, Democratic or independent, to use all efforts to apprehend and prosecute offenders.

"One of the Green Party's Ten Key Values is Diversity" said Constance Gadell-Newton, Green Party of Ohio Co-Chair. "People of color, Muslims, immigrants, women and the GLBT community all contribute to the greatness of our society. Now they are being threatened by individuals who are emboldened by the rhetoric of the Republican President-Elect. It falls upon the Party that benefited from that rhetoric to make it clear to all that this behavior will not be tolerated in Ohio. The Trump victory is not a license to terrorize or demean women and minority groups."

Bob Fitrakis, Green Party of Ohio Co-Chair said "It is shameful that the party in power has so far been silent on these incidents. Every day that passes where they maintain their silence draws our state, and country, further into the cycle of violence. We understand the vast majority of people are as horrified by these incidents as we are. That is why it is essential that the leaders of all Parties join us in condemning them."

It is imperative that the residents of our state know where Party leaders stand on this issue. In addition to asking that the Ohio Republican Party speak out, we also ask the same of the Ohio Democratic and Libertarian Parties. Political ideology should not be an issue when intimidation, harassment and violence directed our citizens is occurring.

It is also an unfortunate truth that both the Democratic and Republican Parties have contributed to the current cultural situation where acts such as these are almost to be considered the norm. The campaigns of late, particularly the most recent one, have echoed with personal attacks and disparagement on both sides. The candidates as well as their surrogates have muddied the waters in an attempt to use fear of the other side as a winning formula. Actual issues, actual proposals, took a back seat to incivility and downright slander in some cases.

We, as a nation, have to do better. We can do better, and it can start now with all political parties urging as one voice, stop the bigotry, stop the intimidation, stop the racism and sexism, and stop the violence.