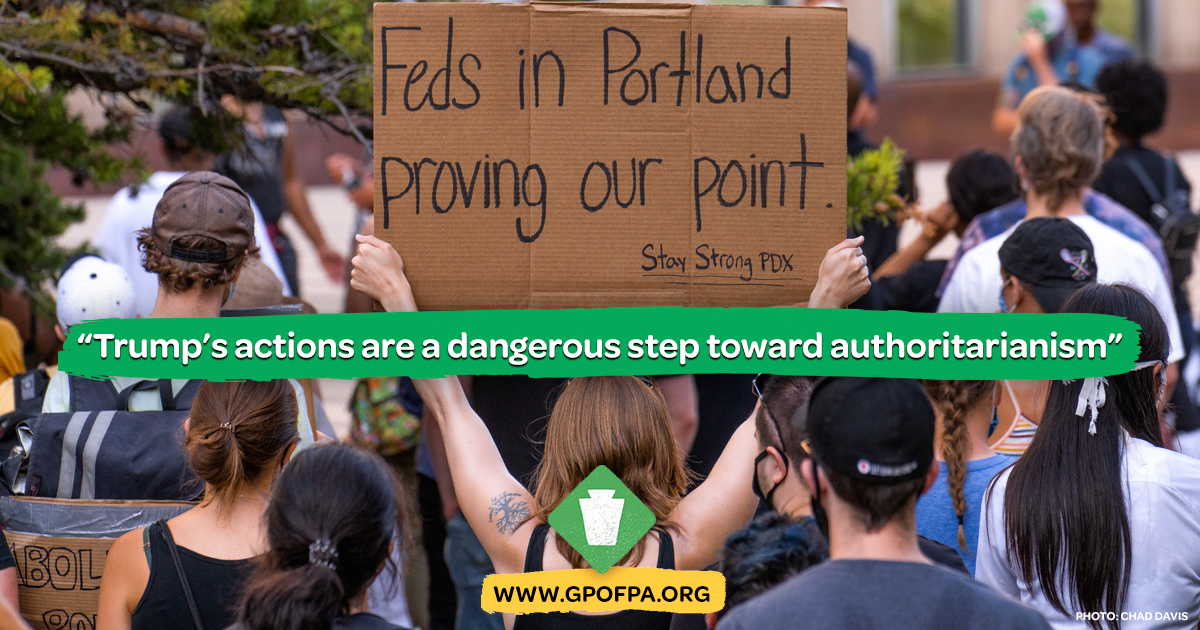 PHILADELPHIA – President Donald Trump was recently recorded making this threat: “Well, I'm going to do something. That I can tell you -- because we're not going to -- New York and Chicago and Philadelphia, Detroit and Baltimore and all of these -- Oakland is a mess. We're not going to let this happen in our country. All run by liberal Democrats.” Like usual, Trump blamed the Democrats for the civil unrest, and the Democrats blame Trump and the Republicans.

Neither of the corporate parties have offered a solution. That has been left up to the Green Party.  On July 22, Green Party Candidate for President Howie Hawkins, said, “The real solution for increasing security in urban areas and reducing crime is to invest in those communities. We are campaigning for a Marshall Plan to rebuild impoverished communities and an Economic Bill of Rights to end poverty and economic despair.” The only real plans that will appropriately serve all Americans are coming from the Green Party.

The Green Party of Pennsylvania (GPPA) considers Trump’s actions a dangerous step toward authoritarianism. Leaders of the party condemned both the president’s words and his actions. GPPA Secretary Beth Scroggin of Chester County said, “We all must stand in opposition to Donald Trump's words and actions against peaceful protesters. If we do not speak out against the federal agents abusing and abducting those who are standing up for their rights and the rights of others, there will be no one left to stand for us."

GPPA Co-chair Alan Smith also of Chester County, explained further, “The ruling class of the United States has always used violence and repression to further its aims and maintain its control. What's happening in Portland is just another clear example of this. From slave catchers to ICE agents, from union busters to FBI provocateurs, from CIA covert operations to overt military actions, the ruling class has used killing, kidnapping, torture, and caging to keep a destructive social order in place here in the U.S. and abroad. This social order exploits disproportionately Black, Brown, and Indigenous people while simultaneously destroying the planet. While their rhetoric may say otherwise both political wings of the corporate duopoly serve the interests of the ruling class. The current occupant of the White House employs federal agents to attack protesters. At the same time 37 senators with a D next to their name just voted to approve his expanded military budget. Their party is also on the verge of nominating as their leader the architect of a 1994 Crime Bill that has ravaged millions of Black and Brown lives. Now more than ever, is the need to build outside of this stifling political order. Now more than ever, is it clear to vote Green, to act Green, to be Green, to elevate people, planet, and peace over profit.”

Similarly, Green Party candidate for U.S. Senate from Maine, Lisa Savage, tweeted, "The militarized police state in Portland, OR, looks a lot like an illegal deployment of military forces against U.S. civilians. As Senator, I'll protect our Constitutional rights and work to roll back decades of encroaching police state, surveillance, and mass incarceration policies."

Howie Hawkins stated in his most recent press release the true depravity of Trump's intentions. “Trump is losing by a landslide. He is using militarized police as props to try and rescue his failing campaign.”

“The Green Party considers these actions a dangerous step toward authoritarianism. Members of the party condemn both the president’s words and actions.” said Justin Bell, a member of the Green Party of Philadelphia City Committee. “This is government overreaching at its worst.”

Some Democrats have also come out and condemned Trump’s actions. Unfortunately, solace will not be found in the Democratic Party. After all, President Barack Obama paved the way for Trump in 2011 by signing the National Defense Authorization Act. This NDAA included a section entitled "Counter-Terrorism," which authorized the indefinite military detention of persons the government suspects of involvement in terrorism, including U.S. citizens arrested on American soil. Since Trump has claimed both Black Lives Matter (BLM) and Antifa are terrorist organizations, it’s unclear if what is happening in Portland is technically illegal. Though to the rest of the nation it sure looks like an infringement on civil rights.

“Trump is going in the opposite direction of what is needed. We need community control of the police and a transfer of funding from over-policing and harassing impoverished communities to providing living-wage jobs, affordable housing, and good schools, health care, and social services to these communities. We do not need a would-be dictator in the White House sending secret police to cities to escalate violence,” said Presidential Candidate Hawkins. “Trump is trying to rule by dividing people, but his abusive use of secret police will backfire and result in an even larger defeat. And, if the Republican Party fails to stand up to Trump, they will also pay a price at the polls.”

A woman holds up a sign that reads "Feds in Portland proving our point. "Stay Strong PDX" outside the Federal Courthouse in downtown Minneapolis. Protesters gathered on July 23rd, 2020 to protest federal officers being deployed to cities around the country.