US Senate Candidate Savage: we must act to overcome white supremacy and systemic racism 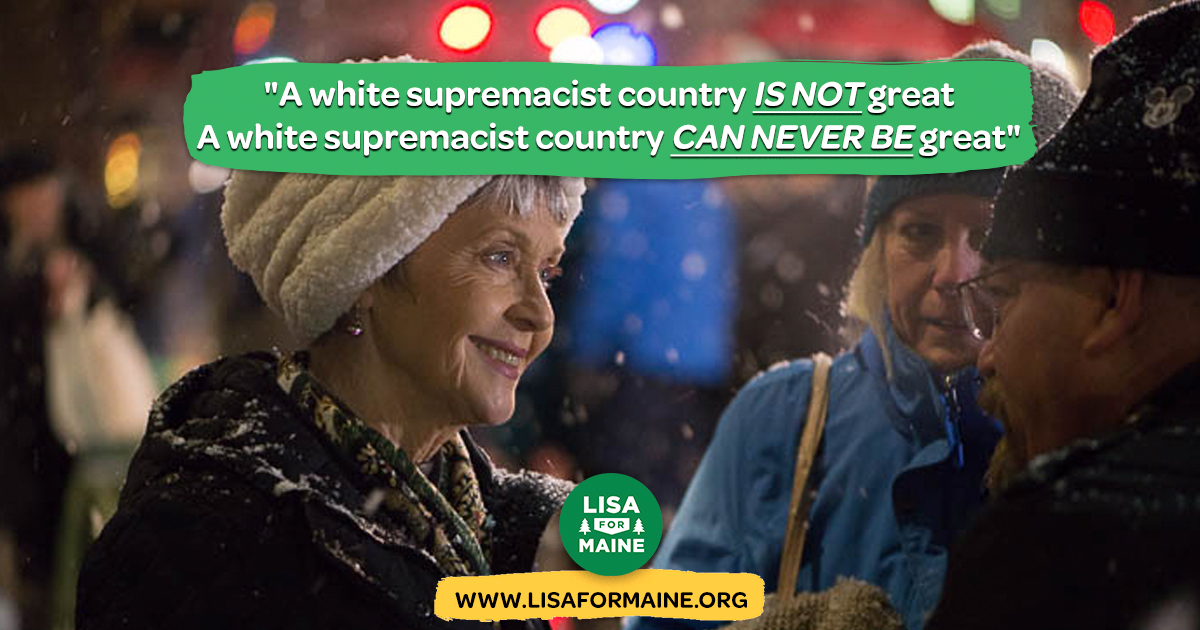 GRAY, Me – Today Lisa Savage, independent Green candidate for US Senate in Maine's ranked choice voting race for the seat currently held by Susan Collins, released the following statement in response to the uprising following the police murder of George Floyd and other Black Americans:

It is a well-known business maxim that you can discern an organization’s priorities by examining its budget. What does our federal budget prioritize?

Our tax dollars are spent on vast amounts of weaponry and violent crowd control technology and equipment every year. More than 60 cents from every dollar you send to the federal government is dedicated to military and violent pursuits. It is to protect us, we’re told. And yet this year we learned what weak investments were made to protect us from a public health crisis like the COVID-19 pandemic. Since the disease began to spread in the U.S., mass shortages of personal protective equipment (PPE) have resulted in health care providers working for weeks now with inadequate protection, and in a mere fraction of the population being tested due to shortages of items as basic as nasal swabs.

Our government has failed us. With a foundation of white supremacist priorities that have been built into our budget, we have focused for far too long on the wrong enemies, the wrong protection, the wrong problems.

People are fed up with unaccountable policing that targets Black men, women, and children and deals out injury, death, humiliation, and destruction of lives without meaningful consequences. Hundreds of thousands have rightly taken to the streets in all 50 states, including here throughout Maine. We have seen countless examples of militarized police forces instigating violence as these crowds of frustrated and angry citizens seek to peacefully assemble and express themselves, as is protected in the very first amendment to the U.S. Constitution.

Journalists have particularly been targeted -- shot at and arrested -- while attempting to do their jobs. When our own police forces, our own military, are attacking the free press, something is deeply wrong with our country and its priorities.

I am calling on Congress to either return to Washington D.C. or begin working remotely, immediately, to address the vacuum of leadership during these dangerous times. At a bare minimum, they must:

Here at home in Maine, I am calling on the legislature in my state to invest in anti-racist education preK-12 to be delivered remotely starting as soon as possible, and to embed it in the Maine Learning Results. Further, I am calling on Governor Janet Mills to include an indigenous (non-immigrant) Black person, that is, someone descended from African slaves kidnapped and brought to America, in every decision-making body in her administration. This includes committees charged with recommending policies for economic recovery, education, policing, housing, food production and distribution and, especially, health care policy.

The disproportionate number of Black people who are arrested, tried, and incarcerated in Maine as compared with their presence in the population speaks for itself -- the problem is here, it is us: systemic racism borne of white supremacy. The disproportionate rate of infection and death from the COVID-19 disease here in Maine is further evidence of a racist economy, and a racist health care system.

We must do everything in our power to fix these problems as soon as possible. The United States will be great only when we finally overcome white supremacy and systemic racism.