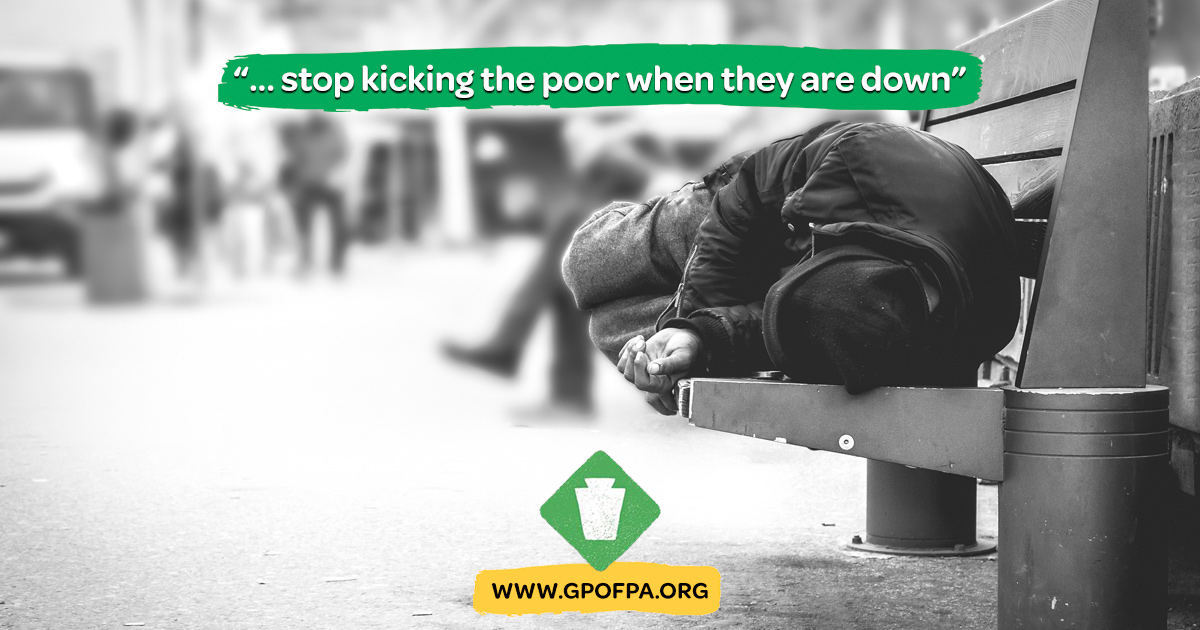 The Green Party of Pennsylvania (GPPA) stands against PA House of Representative Bill 33 (HB 33) which -- if passed -- will end General Assistance to the poor.

General Assistance is for low-income residents who need help, but don’t qualify for traditional welfare because they don’t have dependents. Currently, there are more than 6,600 enrollees in the program. More than half of them live in Philadelphia. Allegheny County has the next most enrollees. For instance:

Alan Smith, co-chair of GPPA said, “We demand that the Pennsylvania state legislature let payments continue to General Assistance recipients and cease all attacks on vital programs for Pennsylvania’s most vulnerable residents.”

General Assistance provides recipients with about $200 per month. The majority helped by the General Assistance program have no other income. 90% of the people on the program have disabilities. Recipients also include individuals in substance use disorder treatment, survivors of domestic violence, and adults caring for non-relative children. The people helped by this program are often ineligible for other public benefit programs because they do not have dependents. Many rely on this program while they wait months and sometime years for their applications for Social Security Disability benefits to be processed.

“General Assistance is being targeted by the majority-Republican legislature as part of its bigger plan to dismantle an array of programs that help struggling Pennsylvanians get by,” wrote Heidi Schultheis, analyst for the Center for American Progress. Chris Robinson, a GPPA delegate from Philadelphia, agreed, saying, “This attempt to cut aid to the most vulnerable here in Pennsylvania is unconscionable and must be stopped.”

“The legislature must stop kicking the poor when they are down,” said Sheri Miller, co-chair of GPPA from Adams County. “No longer can we accept that the wealthy get it easy and the poor pay more. The Green Party of Pennsylvania urges everyone to call their PA Representative and tell them to vote against HB 33, which will cut the General Assistance program. We must bring attention to this egregious injustice and stop the war on the poor, so that John, Klaudia, Sandra, Todd, and thousands of other Pennsylvanians can not only survive but thrive.”

In Pennsylvania, Very Rich Getting Richer, Everybody Else Getting Poorer

What About the Rest of Us? Top 1% Takes Home All the Increase in Pennsylvania Income in Current Economic Recovery

Pennsylvania Plans Vote on Cutting Assistance for Its Poorest Residents

Of Harrisburg’s push to punish the poor

PA cares for all