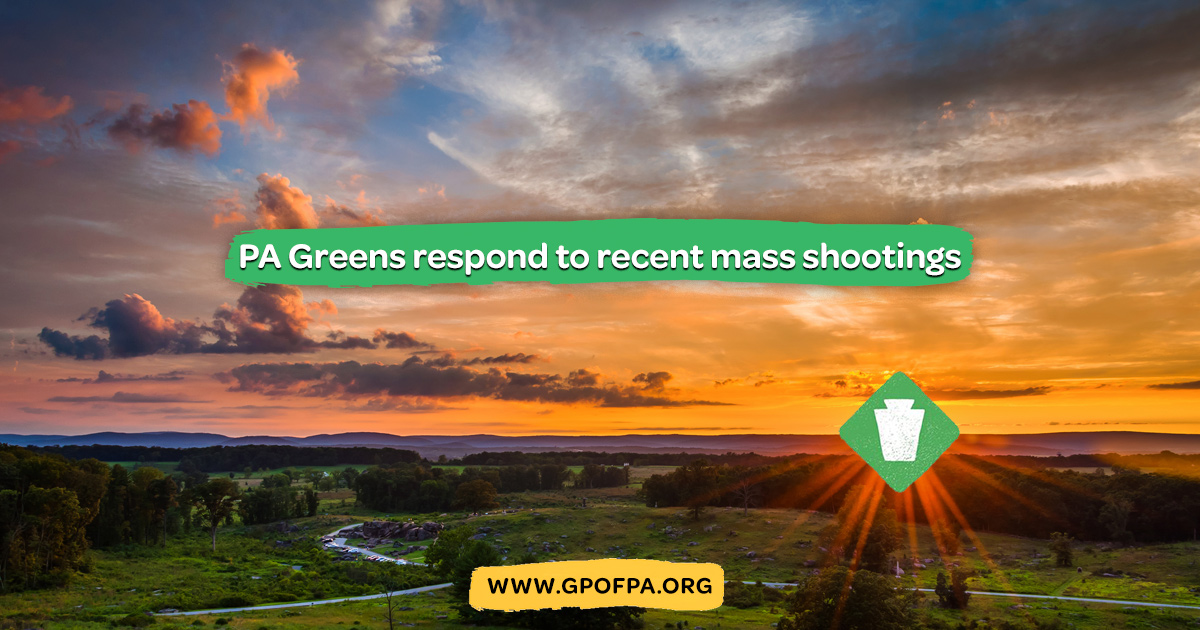 PHILADELPHIA – The Green Party of Pennsylvania reaffirms its core principles of peace and social justice in condemning the horrific mass shootings and the ideology that produced them.

Seeing people and planet as things to be conquered lies at the root of violence.

The Green Party promotes non-violent methods to oppose practices and policies with which we disagree, and will guide our actions toward lasting personal, community and global peace.

We seek to join with people and organizations around the world to foster peace, economic justice, and the health of the planet.

In the wake of these events, we encourage everyone to do the following:

The machine that is producing this destruction will be stopped when we refuse to be cogs in it. As Bayard Rustin said, "we must tuck our bodies in places so wheels don't turn." We must make this existing paradigm obsolete.

Begin today creating a new world where people and planet are not seen as expendable. Act now as if our lives depend on it, because they do.

People in cages, gunned down at all ages.

Involuntary interment, for our own “betterment.”

From nuclear bombs in Japan to drones in Afghanistan.

From white supremacy to capitalist patriarchy.

From materialism to consumerism.

From imperialism to neo-liberalism and all other -isms.

Violins moan as our cries they mirror.

This is not pretty music to our ears,

But a summoning of our worst fears.

From alienation to isolation, tearing up our hearts.

To find the antidote, we must sing a different note.

For the seas to calm, "Viva! People, planet and peace!" must be our song.

Look hard in the mirror, beyond the terror.

See a new world where we are together.

No longer dehumanized, beyond fear, we all rise!