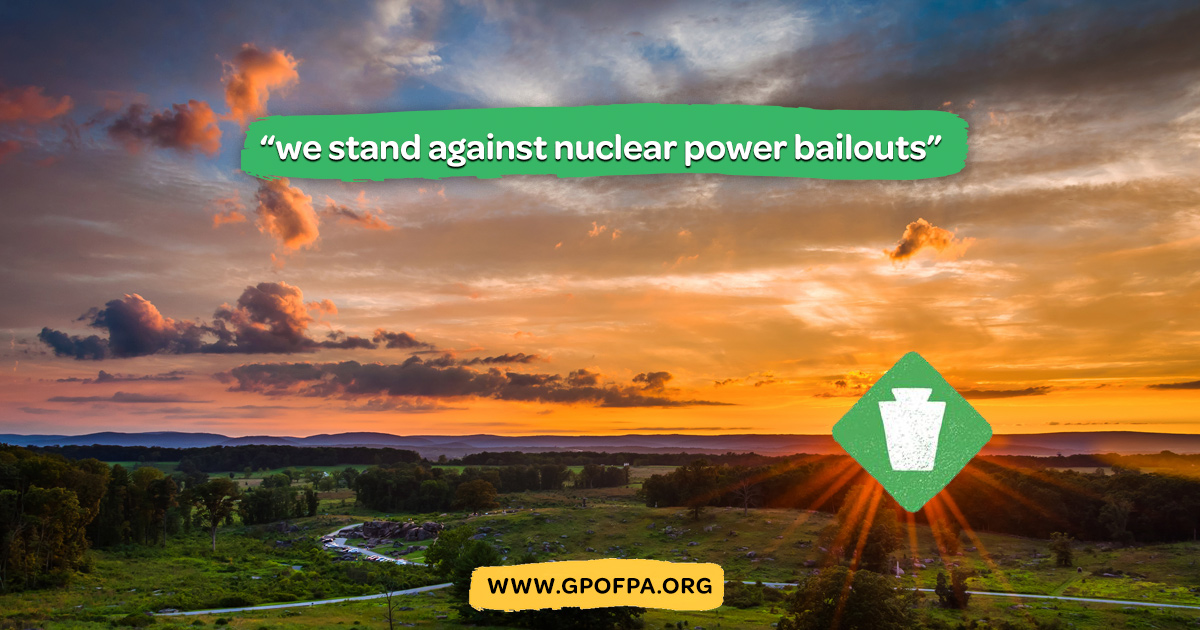 The Green Party has a long history of supporting renewable energy and conservation as tools in the struggle against climate change. The platform of the Green Party of the U.S. calls for "a rapid reduction in energy consumption through energy efficiency and a decisive transition away from fossil fuels and nuclear power toward cleaner, renewable, local energy sources."

Unfortunately, the nuclear power industry has been seeking another bailout from taxpayers. So far, Connecticut, Illinois, New Jersey, and New York have agreed, and the industry is now asking Pennsylvania taxpayers for a similar bailout. Their request can be found in PA House Bill 11 (HB 11), introduced by Rep. Thomas "Three-Mile-Island" Mehaffie (R-Dauphin), and in PA Senate Bill 510 (SB 510), introduced by Sen. Ryan P. Aument (R-Lancaster).

"The Green Party of Pennsylvania (GPPA) stands against this nuclear power bailout and in support of energy conservation and renewable energy sources, like solar, wind and geothermal," explained Chris Robinson, a GPPA delegate from Philadelphia. "The Green Party has renewed its call from May 2015, when it joined organizations around the world to Pull the Plug on Nuclear Power! Nuclear power is dangerous, expensive and unnecessary. GPPA calls for the divestment of funds from nuclear power generation and the immediate investment of those funds into renewable energy technologies such as solar, wind and geothermal."

Jocolyn Bowser-Bostick, a GPPA Steering Committee member and chair of the Green Party of Delaware County, pointed out, "These clean sources of energy also have the advantage over nuclear power and fossil fuels of not releasing toxins and radioactive elements into our air, water, and soil or being explosive. Fossil fuels and nuclear power have already caused and will continue to create numerous tragic events, which result in millions of dollars in property damage, long-term contamination of private and public lands, poisoning of waterways and loss of aquatic life, human injuries and deaths, and extinction of plant and animal species."

Shane Rielly, a GPPA Steering Committee member from Lackawanna County, emphasized, "The GPPA Steering Committee also reaffirmed the Green Party platform calling for PA to 'implement zero emissions clean energy initiatives that will result in sustainable long-term reductions in greenhouse gas pollutants,' and to 'end all use of nuclear power production in PA.'"

In 1954, Chairman Lewis L. Strauss of the Atomic Energy Commission predicted that nuclear power would make energy "too cheap to meter." This prediction has never come true, and the nuclear power industry has never built a nuclear plant without the taxpayers guaranteeing their investment.

Jay Sweeney, a GPPA delegate and the elected auditor of Falls Township, PA, said, "It's interesting how our legislators point out that we are a market economy and claim the government should not be picking winners and losers when it is convenient for them. However, it's a different story when nuclear power -- their sacred cow -- is at stake."

"Not only is nuclear power unaffordable," continued Sweeney, "it's also extremely dangerous. In PA we have already had the Three Mile Island disaster. Russia had the Chernobyl disaster. The latest meltdown, in Fukushima, Japan, still has not been resolved, and radiation continues to enter the Pacific Ocean. Do we need any more evidence of the danger? I live about 40 miles from the Susquehanna Nuclear Power Station in Berwick, PA. The nuclear waste generated there will be emitting radiation for generations to come."

Jocolyn Bowser-Bostick concluded, "Mother and infant mortality rates, respiratory illnesses such as asthma, cancer and other health problems caused by the extraction, processing, transport and use of nuclear and fossil fuels will significantly drop if we aggressively use clean, renewable energy sources. As we increase our energy efficiency, use more clean energy, and create new and improved technologies that better utilize clean and renewable sources of energy, we will create new, good-paying jobs that will help lift millions out of poverty."