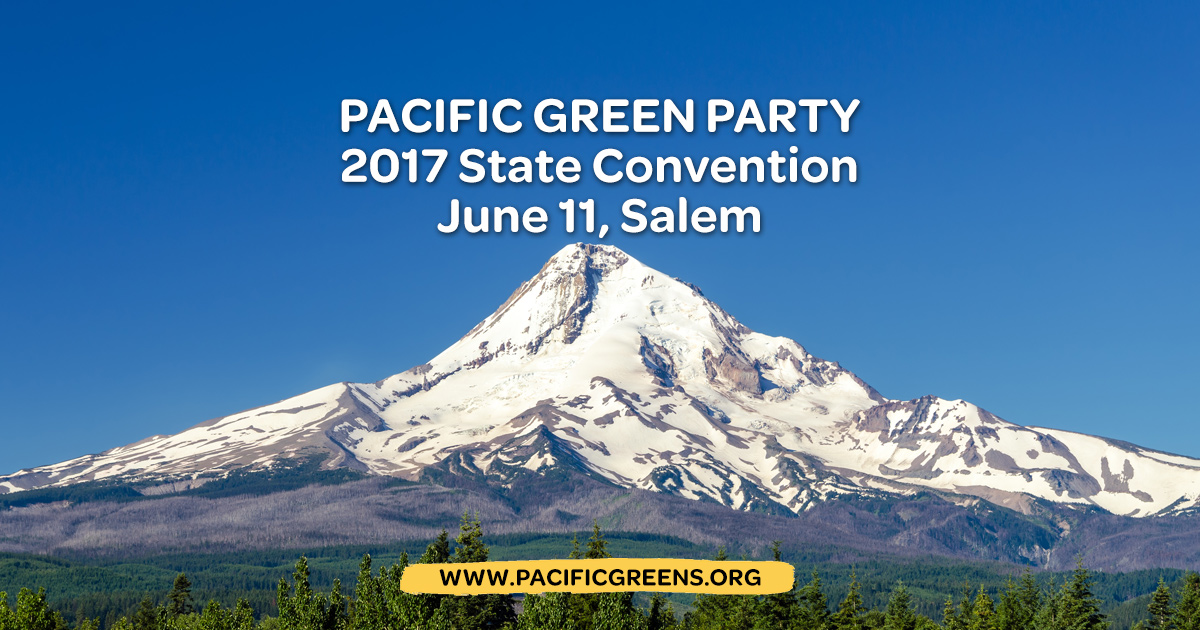 The Pacific Green Party will be holding their state convention on Sunday, June 11 in Salem, Oregon.

These are the proposed amendments to the Constitution and Bylaws. Please read ahead of time and bring a copy if you intend to participate in topic #1.

Proposed Changes to PGP Constitution and Bylaws
Summary of Proposals:

1.b. Also delete requirement to, "Wherever possible," submit constitution and bylaw proposals to the convention previous to the business convention for discussion. There are already provisions to submit agenda items in advance of conventions for discussion and consideration.

2. Eliminate requirement that every convention be publicized in three newspapers of record. Instead require that publicizing of conventions conform to state law and use best practical means of giving notice to membership.

5. Change requirement for locals to submit a roster of members from every six months to thirty days before each state convention.

7. Require that members wishing to observe committee meetings make their request in advance so the committee knows who to notify of scheduled times.

8. Abolish executive committee, which has not been active.

10. Change requirement for delegates to national party to report to state coordinating committee from monthly to at least once every three months.

12. Allow party to opt in to state primary process if law permits.

14. Delete phrase "series of elections" from provision that chapters cannot endorse different candidates for an election. It has no apparent meaning.

Bylaws Article XIX – Convention and Committee Process
"G. The agenda committee will strive to limit the agenda to items appropriate for the specific convention. Constitution and Bylaws changes will be handled exclusively at the Annual Business Convention (scheduled between February 1 and July 1 as indicated in Bylaws Article IX, section B.1). Nominations of candidates to statewide office will be the primary focus of the Nominating conventions (in even numbered years, Bylaws Article IX, section B.1) in order to allow ample time for presentations and discussion. Other conventions/conferences will be dedicated to Party building and information sharing as desired by the party membership. Wherever possible, constitution and bylaws proposals will be submitted at the convention or conference prior to the annual convention for introduction and discussion so that the decisions in this regard will be made with proper consideration."
Comments: The provision that changes to the constitution and bylaws have to be handled "exclusively" at a business convention seems unduly restrictive. There may be times when a change is recognized as timely and so appropriate for another convention. Also the provision in the last sentence for submitting proposed changes for discussion at the convention in advance of the business convention seems unnecessary. "Wherever possible" is vague. As long any proposed changes are submitted in advance per the other bylaws for convention agendas, members will have the chance to consider them, discuss them with others, and attend the convention in which the changes are decided. Plus there will likely be different people at the two conventions, so the discussion will just repeat itself. The provision also confused me at least into thinking that all changes to the constitution and bylaws have to be voted on at two conventions.

Bylaws, Article IX – Membership Meetings
"A.2. Every convention shall be publicized as required in ORS 248.009(3) for nominating conventions. Additionally, the coordinating committee shall attempt to give notice to every supporting member in the applicable region (generally the entire state) at least 10 days prior to the convention. 60 days' notice is preferred but not required."
Comments: ORS 248.009(3) requires advance notice of nominating conventions in three newspapers of record. There is no need for publishing advance notice of other conventions in newspapers. No one looks to the classified ads in random newspapers for notice of conventions, and it costs money and takes someone's time to write, schedule, and pay for such notices. Notices can be easily be done by posting on the PGP website, Facebook page, and by email; plus if the proposal 2 is adopted everyone at a convention will know the time and place well ahead of time, and the time and place will appear in the convention minutes.
Proposal: Replace A.2 with the following:
"A.2. Nominating conventions shall be publicized as required by Oregon law. The coordinating committee shall also use the best practical means available to give notice of each convention to all of the supporting members in the entire state at least thirty days prior to the convention."

"Statewide conventions shall be held at least three times a year. Preferred dates shall be January/February, May/June, and September/October. The next year's schedule and locations to be decided at the September/October meeting so that preparations can be made in advance."
Comments: The final sentence hasn't been followed for as long as I've been in the party, and I think a better process would have each convention plan the next two conventions, making final decisions on the time and place of the next one and tentative decisions on the time and place of the one after that. I'd like to delete this sentence and add the suggested replacement process to the by-laws. (See Proposal 4 below.)
Proposal: Delete the final sentence.

"B. Minimum meeting requirements
B.1. The coordinating committee shall convene at least two statewide membership meetings each calendar year, including at least one convention scheduled between February 1 and July 1, and in even-numbered years including at least one convention that meets the legal timing requirements for nominating candidates to statewide office."
Comments: The minimum number of meetings contradicts the constitutional requirement (above) for three conventions a year. The whole Article is only about conventions, and there is no section C, so I would replace section B with a sub-section of A adding the suggested replacement process for planning conventions (see proposal 1 above).
Proposal: First, replace "Membership Meetings" in the title with "Conventions". Then drop section B and add the following:
"A.5. At each convention the date and location (city) of the next two conventions shall be determined, with a final decision on the next convention and a tentative decision on the one following that. The party chapter in a chosen location shall be responsible for selecting a suitable venue and preparing the logistics of the convention. In even-numbered years at least one convention must meet the legal timing requirements for nominating candidates to statewide office."

"J. Each chapter shall submit a roster of its members to the party secretary every six months."
Comments: This hasn't been followed during my time with the party. It's not clear when the rosters should be submitted; sometime before a convention would be helpful in checking eligibility to vote. I think it is important that the rosters include only members who remain active in the chapter, so that should be specified in the language.
Proposal: Replace with: "J. Each chapter shall submit to the party secretary a roster of active members in the chapter thirty days before each state convention."

"F.10. Agenda items for conventions may be sponsored by committees or individuals. Items sponsored by individuals other than the party coordinator(s) must be submitted to an appropriate committee for seasoning at least 45 days before the convention. The committee will review items for appropriateness and completeness of thinking and documentation."
Comments: This section seems unnecessary. Section B says the agenda committee should attempt to include all items submitted and that the deadline for submission should be no less than 30 days before a convention. That covers it fine.
Proposal: Delete section F.10.

"The executive committee shall be composed of the officers and the coordinating committee.
A. Duties
A.1. All officers shall participate in coordinating committee meetings.
A.2. Set the agenda for state meetings. The agenda must be approved by majority vote at the appropriate state meetings."
Comments: This whole section seems unnecessary. If there is an officer outside of the State Coordinating Committee, the SCC can ask the officer to participate in meetings when needed. By-law Article XIX has a long section B about agenda committees for conventions, including the provision that final decisions on the agenda are up to the convention membership.
Proposal: Delete this Article and renumber subsequent articles accordingly.

"A.2. Representatives shall report at least monthly to the PGP coordinating committee and shall consult with the PGP coordinating committee prior to casting votes on major decisions."
Comments: This refers to our representatives to the Green Party of the United States. I haven't received any monthly reports from our representatives during the time I've been on the SCC, and my impression is that this is because there is usually not much happening. Quarterly reports may be sufficient.
Proposal: Replace "at least monthly" with "at least once every three months".

"D. Notwithstanding the above, any member may attend party conventions and may vote in the nomination of candidates for public office."
Comments: Planning for conventions has been difficult because we have not used a reservation process to determine how many members will attend (so we can know how big a venue we need) and to check eligibility to vote. I would like to set up an advance registration system in which all members are eligible to attend but must register to exercise their right.
Proposal: Replace with the following:
"D. Notwithstanding the above, every member is eligible to register to attend party conventions and, if registered, may attend and vote in the nomination of candidates for public office. A registration deadline may not be set for more than thirty days in advance of a convention. There shall be no registration fee."

"A.4. Votes taken at convention specific to candidate nominations and endorsements, ballot initiative endorsements, and election of state coordinating committee members may be taken using absentee ballots. The state coordinating committee shall establish procedures for when and how a convention vote will be taken using absentee ballots."
Comments: The Independent Party has been trying to pass a law to open participation in primaries to all minor parties. If such a law passes, we may want to opt to nominate candidates via the state-run primary so as to give all registered PGP members the chance to choose candidates.
Proposal: Add the following sentence: "If Oregon law permits, the state coordinating committee may opt to use the state-run primary process for nominating candidates."

"B. Amendments to the Mission Statement, the Statement of Principles, constitution and bylaws will require an affirmative vote of two-thirds of the supporting members eligible to vote and voting at a convention or meeting; there shall be no voting by mail or proxy. All proposed changes must be received by the coordinating committee 30 days before the convention or meeting. Individuals proposing a change shall provide sufficient copies for each member of the coordinating committee and for the party officers. The coordinating committee shall try to disseminate the proposed changes as widely as possible."
Comments: The phrase "convention or meeting" is confusing, as these changes can only be done at a convention.
Proposal: Drop the phase "or meeting" from the two places where it occurs in the section.