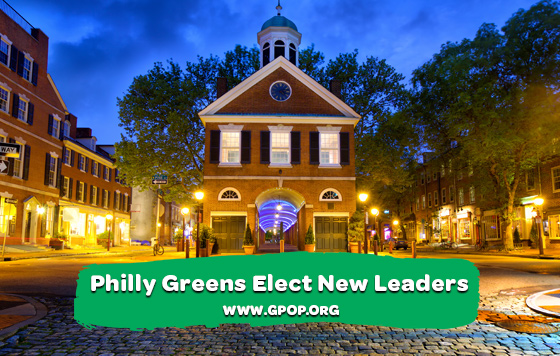 The members of the Green Party of Philadelphia (GPOP) have elected new leaders. This election marks a major turn for Philadelphia's opposition to the two corporate Parties. Meeting at Shissler Recreation Center in Fishtown, Green Party members elected a seven-person City Committee (think "steering committee") with only two incumbents. The other five new members have never before held elected leadership posts within the Green Party. The election was moderated by Kristin Combs, chair of the Green Party of Pennsylvania.

All of the new leaders have already earned their stripes doing volunteer work. McShea, a carpenter, represented Green Party presidential/vice-presidential candidates Jill Stein and Ajamu Baraka at the polls in 2016, and he is presently training poll workers for Cheri Honkala's Campaign for PA Representative in District 197. Magruder has been the co-chair of the GPOP Outreach Working Group.

Anderson, a middle school teacher, has managed for six months the GPOP twitter account, which has more than doubled in followers. Anderson said that he plans to "amplify the Green Party message via Twitter and grow our contact with individuals and organizations in the Philly area. I also hope to use GPOP Twitter so that the public knows that the Green Party is much more than the environment." Anderson continued, "I want people to see the breadth of the Green Party platform and the connectedness of our Four Pillars: ecological wisdom, social justice, grassroots democracy, and nonviolence. We need to be drawing connections between these issues, and Twitter is a great platform for us to do this."

Georgeson, a graphic designer, has created flyers for the Green Party and is currently working on their new logo. Georgeson said,"I plan to use my skills as a graphic designer as well as my involvement with the local activist community to help increase awareness of the Green Party and our Four Pillars; especially among those that have been left out in the cold by the two corporate parties and are looking for some real, life-saving change."

Rawlings, a computer systems administrator, volunteered on Kristin Combs' campaign for Philadelphia City Council in 2015. "I want to increase our visibility and viability so that we can compete in every city and state election, including having two candidates for at-large council seats in 2019."