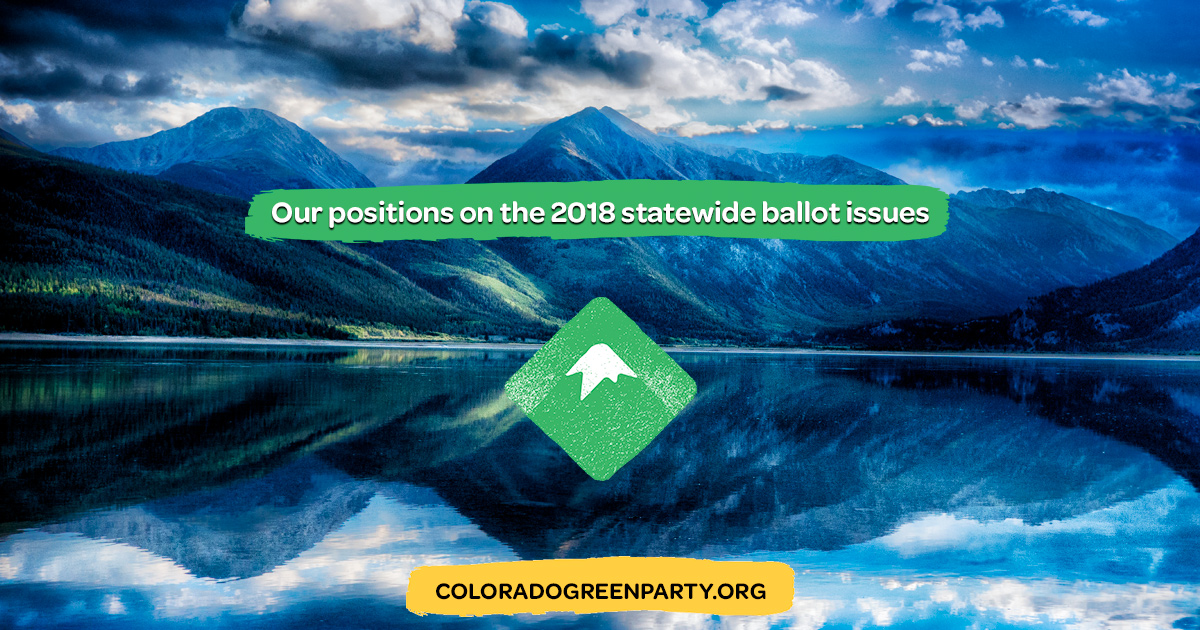 These positions were approved unanimously by the Green Party of Colorado state council on October 22, 2018.

This potentially encourages more young people to get involved in local politics to try to shift the focus away from the dominant power being in the hands of older white men, making decisions for our very diverse younger generations. If 21 year olds are old enough to be in the military, they are old enough to make political decisions. (GPCO Youth Caucus opinion)

No discernible difference in formatting, though it could result in a shorter ballot which could save taxpayer dollars.

Colorado’s alternative parties have been left out of consideration for these new redistricting boards, when instead, a proportional representation formula could have been used, which would have been more in keeping with the true politics of Colorado

If the federal government will not move to amend the U.S. Constitution, we can make the change here. This provides the opportunities for inmates to sue for rights to end their forced labor while serving time.

While this amendment would raise personal income taxes for Colorado’s 1 percent, the details show that it locks in personal property taxes to 7%, when a 6.1% rate is expected for 2019. Many of Colorado’s most vulnerable residents have had to weather a sharp increase in property taxes in the current assessment year, creating an unstable housing situation for the state’s working poor, elderly and people with disabilities. While a fund would be created for preschool, we believe that HOW the money is allocated, matters. The revenue generated under this amendment is not earmarked for support of particular populations in specific ways, and experience has shown that metro school districts like Denver tend to divert funding to charter schools. However, The “negative factor” has starved schools in the rural areas and western slope of funds for more than a decade, causing a situation in which some districts have been forced to move to four school days per week to make ends meet. Instead, Colorado should abolish Tax Increment Financing (TIF), which strips the state general fund and diverts local property taxes AWAY from schools, to the tune of about $90 million in 2016 in Denver alone.

Amendment 74: Compensation for Fair Market Value by Gov’t. – NO.

The registered agent for this ballot issue committee is Douglas Bruce, and the supporting organization goes by the offensive name of the “Committee for Colorado’s Shared Heritage.” These groups are reading the writing on the wall, that the people of Colorado have lost patience with the oil & gas extraction industry, and this amendment would seek to compensate landowners who speculate on their potential land value and mineral rights, regardless of whether a local government wants to restrict fracking within its limits. This would put profit over people.

This amendment could potentially create a free-for-all in campaign fundraising, because it does not RESTRICT wealthy candidates from donating more to their own campaigns. Instead, we should have statutory limits on the amount of money a wealthy person can donate to their own campaign to be in line with statutory limits on personal contributions. Currently, the statutory maximum personal donation amount to statewide candidates is $1150 and $400 to other state positions.

Similar to the position on Amendment 73, when Colorado abolishes TIF subsidies for corporate development projects, the state general fund will have more revenues to apply toward highway projects. Additionally, we say no to more debt, which puts us under the control of Goldman Sachs, etc. We should institute a state bank instead, before we create more bonds.

Prop 110: Sales Tax and Bonds for Transportation Projects – NO.

Abolish TIF, found a state bank, so that the state is in a better, debt-free position to fund transportation projects.

We favor an end to payday loans altogether, but this measure at least makes the cost of the loans cheaper. We support a statewide mandatory living wage increase, as well as local rent controls, so that workers can avoid these costs altogether.

While we prefer a statewide ban on fracking, these modest limits can help communities take back control of their local environment. We remain pessimistic that the state legislature will respect the wishes of Coloradans, however, and we must point out that less than 1% of all Colorado jobs are actually extraction related.

Background, text, etc. for all initiatives are available here: https://www.sos.state.co.us/pubs/elections/Initiatives/ballot/contacts/2018.html#i108

This video on what TIF is, made for Chicago but works the same in Colorado: