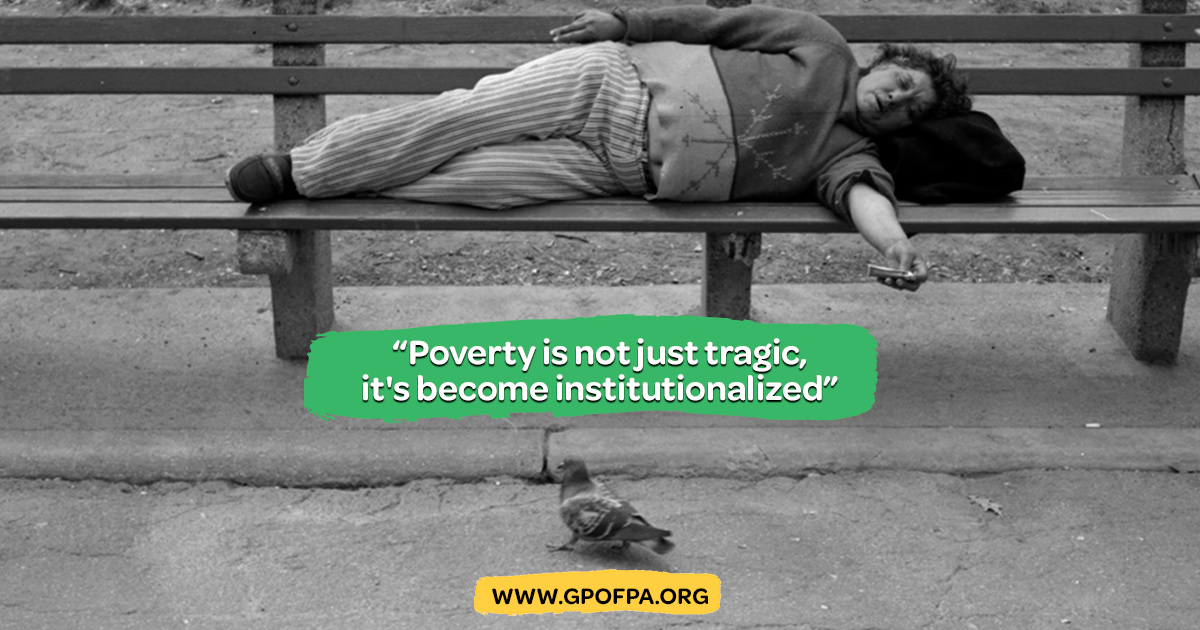 Members of the Green Party of Pennsylvania (GPPA) were saddened by the recently released U.S. Census Bureau report showing persistent poverty across Pennsylvania. The data indicate that there were more than 1.5 million Pennsylvania citizens living in poverty over the past year. That's 12.5% of the population or 1 in 8 people.

"Poverty is not really new news; that's what's so tragic. It's become a part of the American institution," lamented Sheri Miller, Chair of GPPA. "Poverty is not an economic issue – we have always had the resources and the ability to end poverty. It's a political issue: a matter of equity and priority. We've been at war with 'terror' since 2001 at a cost of $250 million per day. The only winners in this 'war' have been our rich, who have gotten richer through the sales of arms and the infrastructure of war. We have not gotten safer."

"In the meantime," offered Miller, "the self-perpetuating nature of poverty waits for someone to break its cruel cycle; a cycle which allows people to be punished for something they didn't do and forces children to start out without hope in a world that unfairly erects obstacles and severely limits their opportunities for a normal, happy life. Mahatma Ghandi once called poverty 'the worst form of violence,' and anyone who has spent a single day talking with people in our poorest areas knows that this is true. Green Party candidates, who consistently prioritize people over money and have creative solutions free from corporate bias, are the best hope for making a real change to the structures underlying poverty in our state and in our country."

"The challenges facing our state are so huge that bold action is essential," said Glover. "If I had been elected the first Green Governor of PA, I would not have managed poverty . . . I would have ended it by creating the PA Green Labor Administration (PA GLAD). When PA GLAD established 500,000 additional jobs -- focused on cleaning our water and air, cooling and warming our homes without fossil fuels, installing solar and wind energy, expanding organic agriculture, extending transit, and teaching related skills – none of our citizens would be living in poverty. When there are a half million additional jobs in PA, there will be less crime, because jobs fight crime better than cops do," said Glover. "As crime decreases, the costs of courts, police, and prison decrease. The money saved could feed further green job creation."

When he learned that more than 133,700 citizens of Allegheny County, PA, live below the poverty level – including 34,257 children – Garret Wasserman, Vice-Chair of the Green Party of Allegheny County said, "It is appalling to learn how many are struggling in poverty in Allegheny County. No child should ever go hungry or worry about homelessness."

Wasserman continued, "We clearly need a Green New Deal that will raise living standards with a living wage of at least $15/hour, good-paying green jobs in renewable energy and infrastructure, and a fracking-free environment with clean drinking water for our children. Pittsburgh Mayor Bill Peduto and Allegheny County Executive Rich Fitzgerald were recently eager to give away billions of dollars in public resources to the already wealthy Amazon and Jeff Bezos. We obviously do not lack the resources to end poverty; we only need the political will to do it."

In Philadelphia, the census shows 395,664 people living below the poverty level, including 107,896 children under 18 years old. In response to 32 percent of Philadelphia's children living in poverty, organizer Chris Robinson of the Green Party of Philadelphia, said, "I believe that elected office holders from the Green Party will provide great relief to citizens living under the poverty level. The Green Party Platform calls for 'a universal basic income (sometimes called a guaranteed income, negative income tax, citizen's income, or citizen dividend). This would go to every adult regardless of health, employment, or marital status, in order to minimize government bureaucracy and intrusiveness into people's lives. The amount should be sufficient so that anyone who is unemployed can afford basic food and shelter.'"

"Running for local office in 2019 will be an opportunity for Green Party candidates to center their campaigns on policies that meet the needs of poor and working people," explained Jenny Isaacs, leader of PA Green Wave, the GPPA's electoral team. "From zoning for affordable housing to municipal living wage, fair workweek policies and resource decisions made by local school boards, there are many ways for Greens to diminish poverty. Our candidates are concerned about inequities in political power, and Greens will lift up the voices from communities most impacted by poverty. I encourage Greens, who are interested in making their voices heard and becoming part of the solution, to run for office next year. Anyone who is interested should immediately contact [email protected] for help in preparing for the campaign season."