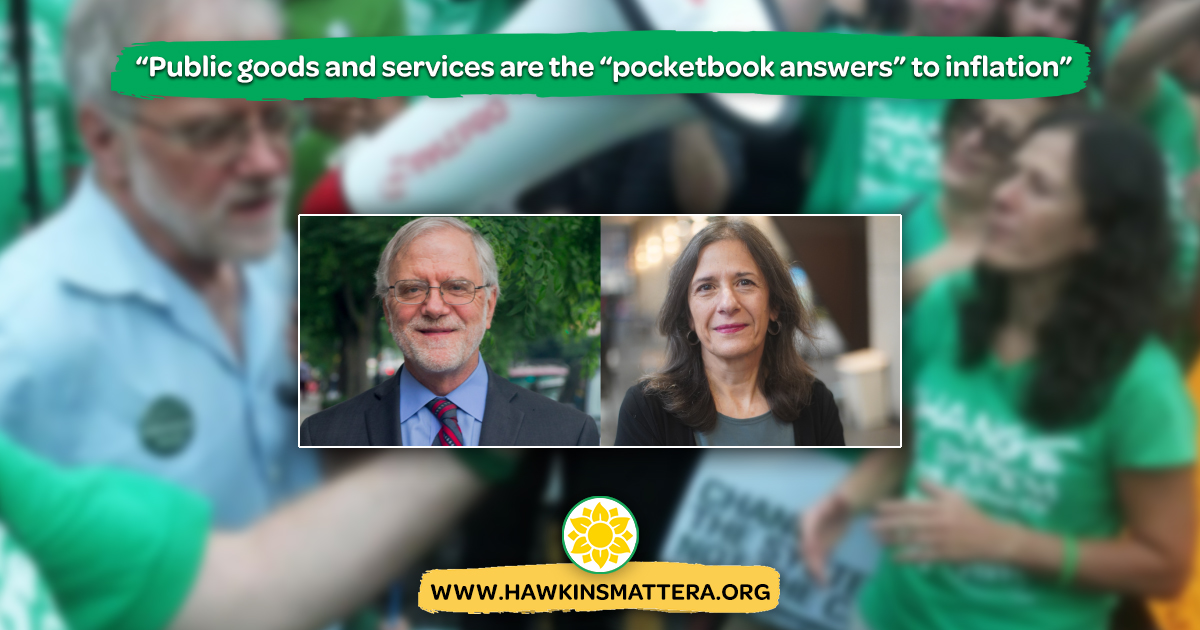 The Green Party of New York gubernatorial candidates today called for the public provision of key goods and services as "pocketbook answers" to the problem of inflation.

"The public provision of essential goods and services is more cost-efficient and socially inclusive than our current system that relies on private provision of these basic needs. The Greens propose public systems to provide health care, child care, education, housing, energy, and broadband. These are must-have needs that should not be left to markets where profit-seeking businesses drive prices beyond the means of many New Yorkers. Basic needs should be provided at cost, not at a higher cost-plus-profit," said Howie Hawkins, the Green Party candidate for Governor.

"These basic goods and services are among the household items with the highest rates of inflation. Public systems to provide for these needs will reduce the costs of living for a majority of New Yorkers. The six-month gas tax moratorium doesn't begin to cut it, certainly for the 55% of us in New York City and the many low-income people throughout the state who don't have cars. Public goods and services are the pocketbook answers we need when too many people are having to choose between food, rent, utilities, and health care," said Gloria Mattera, a Brooklyn resident who is the Green Party candidate for Lt. Governor.

Hawkins and Mattera outlined their proposals for public provision of health care, child care, education, energy, and broadband along with progressive tax reforms to pay for these programs.

Health Care – The Greens have long advocated for a public health care system that covers the cost of all medically necessary services for all New York residents. Health care costs in the U.S. have grown by 186% in the 30 years since 1992 when Assembly Democrats first passed a bill for universal public health care. Since gaining control of both chambers of the legislature in 2018, the Democrats have not moved the New York Health Act for universal health care out of committee for a floor vote. Health care costs are projected to rise another 10% in New York in 2023.

Studies of the proposed New York Health Act have found that it would reduce overall health care spending. More th

Child Care – Child care is unaffordable for millions of New York families. The average cost of infant child care in New York is $15,394, more than the median annual cost of housing ($14,677), almost double the cost of public college ($7,938), and equal to 21% of median family income. 3,500 child care providers, a quarter of the state’s providers, have closed since the Covid pandemic began in early 2020, leaving more “child care deserts” in rural and high-poverty urban areas.

The Greens call for a public system of free child care. After the parental leave period, children will be entitled to a spot in a free public child care center. Parents who wish to care for their children at home can opt out and receive a home child care allowance equal to the per-child wages of child care workers. The program will pay living wages to child care workers.

The Greens contend that funding a public child care sector will be far more inclusive and cost-efficient than the current market system of both private and public providers with its costly bureaucracies that dole out complicated means-tested subsidies, and its out-of-pocket user fees that produce inequalities and exclusion.

As immediate measures, the Greens support rent control and a good cause eviction law to help tenants afford and stay in rental housing. To address the supply shortage that is driving rents up, the Greens call for a state Social Housing Authority to build affordable public housing until every New Yorker has an affordable housing option and private rental prices are driven down closer to the real costs of housing by competition from non-profit public housing. The Greens say this social housing program will produce more housing at less cost per unit than the current failed policy of encouraging affordable private rental housing with public subsidies for private developers.

Energy – Public power costs 12% less to residential customers. Renewable energy costs less and the cost savings to consumers and society increase the faster the clear energy transition is made. A New York public energy system would enable the coordinated planning and investment required for a rapid transition to lower-cost 100% clean energy.

The Green candidates are the only gubernatorial ticket that supports the NY Build Public Renewables Act (S6453C/A1466D), which would enable the New York Power Authority to build and own renewable generation, and the proposed NY Utility Democracy Act, which would socialize and democratize the gas and electric power industry. The Greens want to build upon New York’s 49 municipal public power utilities and the New York Power Authority to cover the whole state with elected local public utility boards that in turn elect the statewide board for the public energy system.

The Greens would also establish a state-owned fuel corporation as part of the state public energy system to secure adequate inventories of gasoline and natural gas in order to free the New Yorkers from price-gouging by the major oil and gas companies. The state fuel corporation would wholesale to retailers whose permitted markups would be limited. The state fuel corporation would provide gasoline for vehicles and natural gas for buildings at reduced prices during the current period of energy cost inflation and until these fossil fuels are phased out as renewables are phased in.

Broadband –The average monthly cost of internet in the U.S. of $68.24 ranks sixth highest in the world, more than double the cost in other wealthy countries like Japan, Germany, France, and the U.K.

The Greens maintain that private internet service providers have not provided the broadband access that the public deserves because they treat broadband as a source of profit, not as a public service to which everyone should have access.The over 600 municipal and 300 cooperative broadband utilities in the U.S. provide customers with lower prices, faster internet speeds, and more responsive customer service than do private internet service providers.

Progressive Tax Reforms – To pay for the enhanced public goods and services they propose, the Green call for raising more revenues through a package of progressive tax reforms. The reforms they support are along the lines proposed by Tax the Rich and Invest In Our New York. Covering personal income, corporate income, wealth, inheritances, and financial transactions, they would raise on the order of $50-$75 billion in new revenues annually.