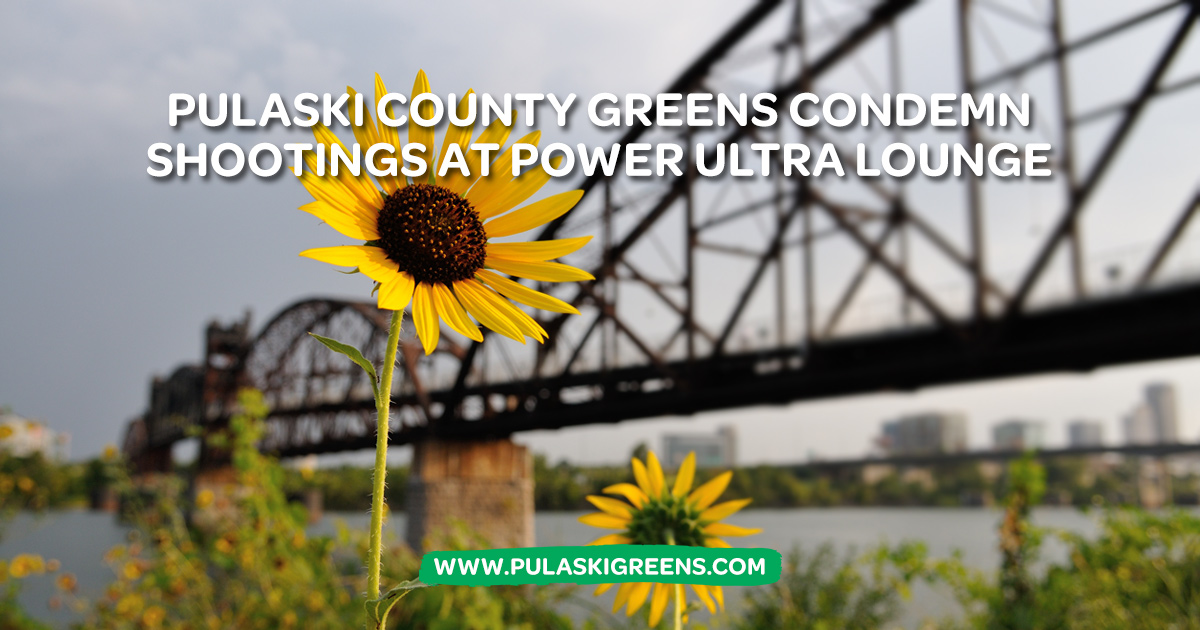 Little Rock, Arkansas — July 5, 2017. Early in the morning of Saturday, July 1, shooting erupted at the Power Ultra Lounge in Little Rock. At the latest official count, there are 28 casualties. The Green Party of Pulaski County wishes to express its relief that no injuries have yet been fatal. Accurate details about what happened aren't fully public knowledge nor, apparently, have any arrests been made in relation to the incident at the packed nightclub. In any event, thanks are due to first responders and law enforcement personnel for quick action.

Within hours of the violence, Little Rock's mayor Mark Stodola declared that his "heart is broken." Such expressions of sorrow are to be commended, but they miss the mark. We should pause to consider the social conditions that lead to violence that seem to be occurring with greater frequency in our society. According to the Arkansas Democrat Gazette website (July 5), violent crime in Little Rock this year has increased 24 percent since 2016. While it generally has declined over the past two decades, violent crime is not the only measure of problems afflicting a community.

Governor Asa Hutchinson referred to "gang-related violence" when he spoke about the tragedy at the Power Ultra Lounge. But all violent acts should be considered, including police brutality and acts of terrorism by self-declared white supremacists. According to the Center for the Study of Hate and Extremism at California State University at San Bernardino, there were over 1,000 incidents of hate crime across the country last year, an increase of 13 percent. A 2016 study by the National Bureau of Economic Research finds that African Americans experience the most violence at the hands of police officers.

Furthermore, the economic ramifications of crime are seldom on the public agenda. An example is financing of transnational criminal activities by large financial institutions, a point made in a 2016 report by the U.S. Government Accountability Office.

Another example is our country's privatized healthcare system, which penalizes people who are the unwilling recipients of injuries. Huge cost will be paid to for-profit insurance companies by the victims of violence at the Power Pulse Lounge and by an already weakened state Medicaid system. This is unacceptable for one of the wealthiest countries in the world.

Our prayers are with the victims of the Power Pulse Lounge tragedy and with the public servants who rescued them at the scene. Over this July 4th weekend, the broader ramifications for our state and our country should be considered.