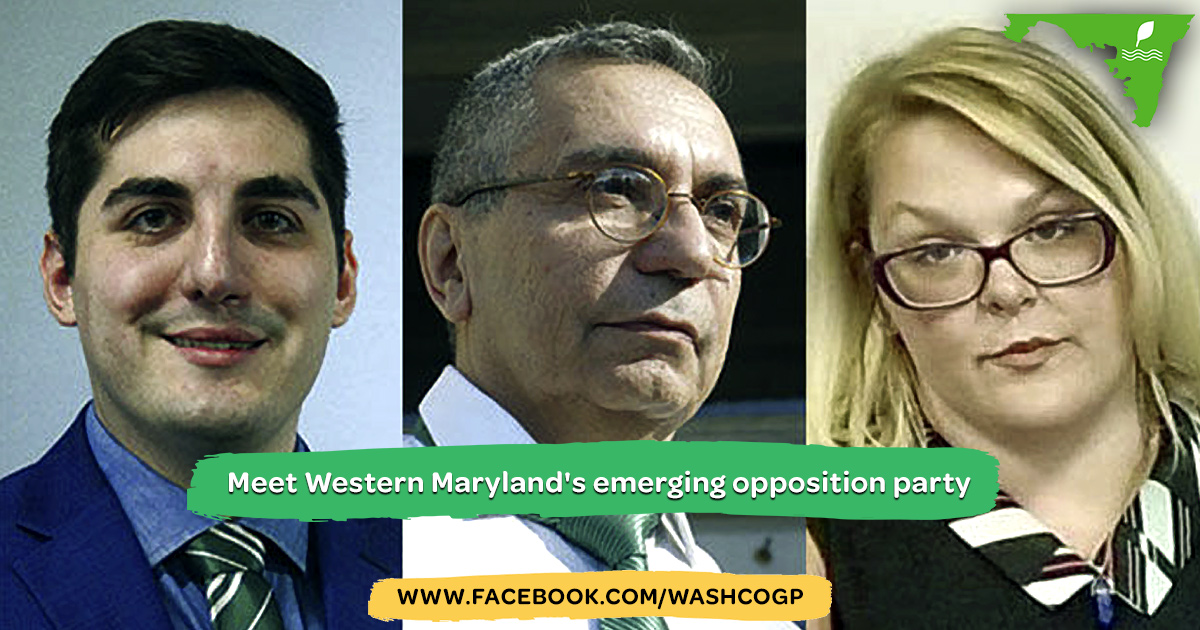 The Green Party has been around for a while. But for the first time this year, the environmentally mindful party is fielding nearly a full local slate of local candidates for the Maryland General Assembly.

"It's the largest slate of Green Party candidates we've ever had," said Andrew Barnhart, who's running for House of Delegates in legislative District 2A.

As of Sept. 30, the last date for which numbers were available, there were 250 registered Green Party voters in Washington County.

But Green candidates are hoping to pull disaffected voters from both major parties.

Then, there are the unaffiliated voters to draw from. In Washington County, there are 19,526 of those. That's just 342 fewer than the entire number of voters registered in Garrett County.

These days, Barnhart says, "there's an independent voting bloc that is not represented."

A lack of representation of one of the major parties in local races for the Maryland General Assembly prompted local Green Party candidates to file for all but two of the Washington County delegation's seats.

All six of those seats are held by Republicans. Only one, Del. Paul Corderman, has been challenged by a Democrat — former Democratic Central Committee Chairman Peter Perini.

Sen. George Edwards, R-Washington/Allegany/Garrett, was initially challenged by a Libertarian candidate named Robin Hood Constitution of Cumberland, but the challenger failed to get his party's nomination and has since been eliminated.

In the meantime, Green Party candidates saw a chance to make a splash.

"(Del.) Mike McKay was running unopposed" in the general election, said Daniel DelMonte of Cumberland, the Green candidate for delegate in District 1C, "so I saw an opportunity."

McKay overcame two challengers in the Republican primary this summer, but no Democrats filed in his district.

"I do not have a background of running for office, but I have always been involved in community and volunteer work since college," DelMonte said.

But lately, local political issues have been of more concern, he said — such as a push for "fracking," a method of extracting natural gas from Marcellus shale, in Allegany and Garrett counties.

"All of our local officials were in favor of it," he said.

Because they're unopposed, he added, "officials kind of arrogantly do their thing."

In this case, however, Gov. Larry Hogan ended the argument by endorsing, then signing, a ban on fracking in Maryland. But that didn't end DelMonte's concern for environmental issues. He opposes construction of a proposed TransCanada pipeline under the Potomac River near Hancock and believes a lot of others are concerned about it, too.

Environmental concerns got Jenna Roland of Hagerstown involved in the Climate March last year. "I've been going to school online since 2010 in environmental studies," she said.

After the 2016 election, "there was a lot of anxiety" among progressives, she said, and "tensions were high. I knew I had to put my energies somewhere."

She'd registered Green "right out of high school," she said. This year, Green Party officials from other jurisdictions encouraged her to run for state Senate in District 2, because the incumbent — Sen. Andrew Serafini, R-Washington — was unopposed.

Now, she said, she wants to give a voice to those who don't think they've been heard by the major parties.

"I don't think Western Maryland gets enough credit as far as the intelligence of the voters," she said. "These are determined people who know how to make the best of a situation. Some of them are fed up with Republicans; it's not serving them. They want a little more independent representation."

Did Dems make them do it?

"In my race, the Democrats decided not to run, but instead, at the last minute recruited radical Green Party candidates to run against Delegate (William) Wivell and me," Del. Neil Parrott, R-Washington, wrote in an email to supporters last month.

He was still convinced the Democrats were behind the Green effort when speaking to Herald-Mail Media last week. He said he first heard about the challenge from a Democrat at the time of the primary election in June.

But all three Green candidates who spoke to Herald-Mail Media denied that Democrats asked them to run. The fourth candidate, Charlotte McBrearty of Hagerstown, was unavailable before deadline. She's running with Barnhart in two-seat District 2A.

"We have similar interests, but by no means was there anyone from the Democratic Party nudging me to run," Barnhart said. "They didn't come to us. … I don't think the Democrats knew we existed.

"We even had our gubernatorial candidate Ian Schlakman say, 'Hey, this is a great opportunity.' We didn't need the Democrats to tell us that."

The reason they're running, Barnhart said, is "lots of Western Maryland representatives were running without opposition. I felt civically and morally obligated to put up a challenge."

Though he's not been in public office before, Barnhart isn't a stranger to Annapolis. His two principle issues are the environment and advocating for the disabled. And he's already doing that.

"Many of the incumbents — I don't see them really as helping people with disabilities," he said. Barnhart has two siblings with developmental disabilities. "I had to constantly go to Annapolis to seek services and removal of barriers" for them and others, and "we have had opposition" in state government.

"I'm not running as kind of a Democratic fall-back," he said. "We offer things that both (Democrats and Republicans) can get behind."

Once Roland made her decision, she received encouragement from one particular Democrat — her fiancé, Democratic Central Committee member Andrew Brown. But he didn't ask her to run, she said. Other Green Party members did.

"We don't see eye to eye on everything," she said. "There's too much corporatization in the Democratic Party; they could be doing more for people."

"I have problems with the Democratic Party, too," DelMonte said. "Nobody's convincing me or anybody in my party to run."