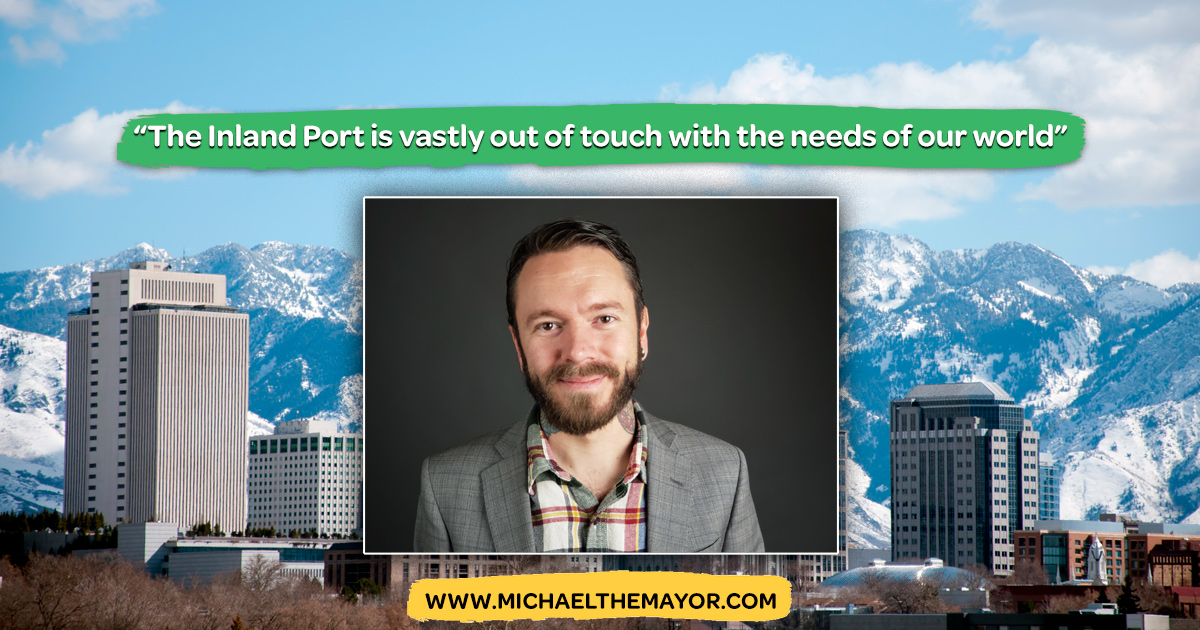 SALT LAKE CITY – Green Party Candidate for Salt Lake County Mayor Michael Cundick appealed to members of the Economic Development Committee this week to reconsider their impending votes on HB347 in a crowded room of others who passionately requested that the bill end in Committee.

"The Inland Port tracks development on a project that is vastly out of touch with the needs of our world," stated Cundick's speech to legislators.

"I urge you to connect with that part of yourself that knows that the health and well-being of your family, and your children's families are inextricably connected to the health and well-being of this living valley as a whole. And at the heart of this valley is the Great Salt Lake. It is vastly important that it is protected, for the habitat it provides, the snowpack and drinking water it provides and for the countless ways it benefits all life in this valley."

HB347 is written with the intent of giving back 25% of property tax revenues to Salt Lake City. The Inland Port Authority would retain 75%. The Bill also changes the composition of the committee, to include board picks by the Mayors of Salt Lake City and other municipalities. It also fast tracks development. Cundick called out legislators for failing to represent the will of the people.

"Seventy-five percent of Salt Lake residents are against this project and you have an opportunity today to honor the will of the people you have been elected to serve," said Cundick. "I can't tell you how discouraging it is, in a state where over 2,000 people a year are dying prematurely from air quality pollution, and where such minimal improvements have been made so far, to be steamrolled by such a hugely polluting and short-sighted and destructive industrial project like the inland port that will only benefit a small amount of wealthy stakeholders at the expense of our quality of life."

Cundick was not alone in his appeal. The committee hearing was held in a room packed with people urging legislators to vote no on HB347. Darin Mann, former Democratic Socialist Candidate for HD 24, was among them. Mann is the Action Director of the SLC Air Protectors.

"This bill puts the cart before the horse by vesting land to development without any environmental assessment," stated Mann. "We need to plan properly for the future and ensure we are doing what's best for our people, our planet and our future."

Despite the pleas of citizens to repeal the bill, HB347 passed out of committee later in the day. Green Party of Utah members responded with further appeals to legislators as the Bill moves forward.

"Even though we are already one fifth into the 21st century, still we are clinging to paradigms and practices that are proven to be deleterious to the long term habitability of our world', said Dee Taylor, Co-Chair of the Green Party of Utah.. "It has never been more urgent to reassess the true costs of unbridled development. The Inland Port is an example of the type of thoughtless, misguided development that will degrade rather than augment the quality of life of Utah citizens."

"The Inland Port is a terribly destructive project that must be stopped," stated Brendan Phillips, 2018 Green Party candidate for Tooele County Commissioner. "The state legislature has ignored the will of Salt Lake City residents and pushed through their development in spite of public outcry. Our wetlands, lake, highways, and the health of residents are all at risk. I implore our lawmakers to consider the health of our valley and residents and put a stop to the Inland Port now."

Cundick is a co-founder and Board member of SLC Air Protectors, Founder of the Utah Permaculture Collective and manages a one-acre farm in Millcreek called the Krishna Food Forest and Farm. He wants legislators to be reminded of the already devastating effects of climate change.

"At a time in the world where bird and insect populations have been severely depleted, where we have to make bold moves to address the climate crisis, and even with Republican representatives like Rep. Curtis acknowledging that we are charged with leaving the world better than it is now, and meaningfully address climate change, it's time to vote no and put a stop to projects like this. We need to be in service to life. Not actively destroying it."